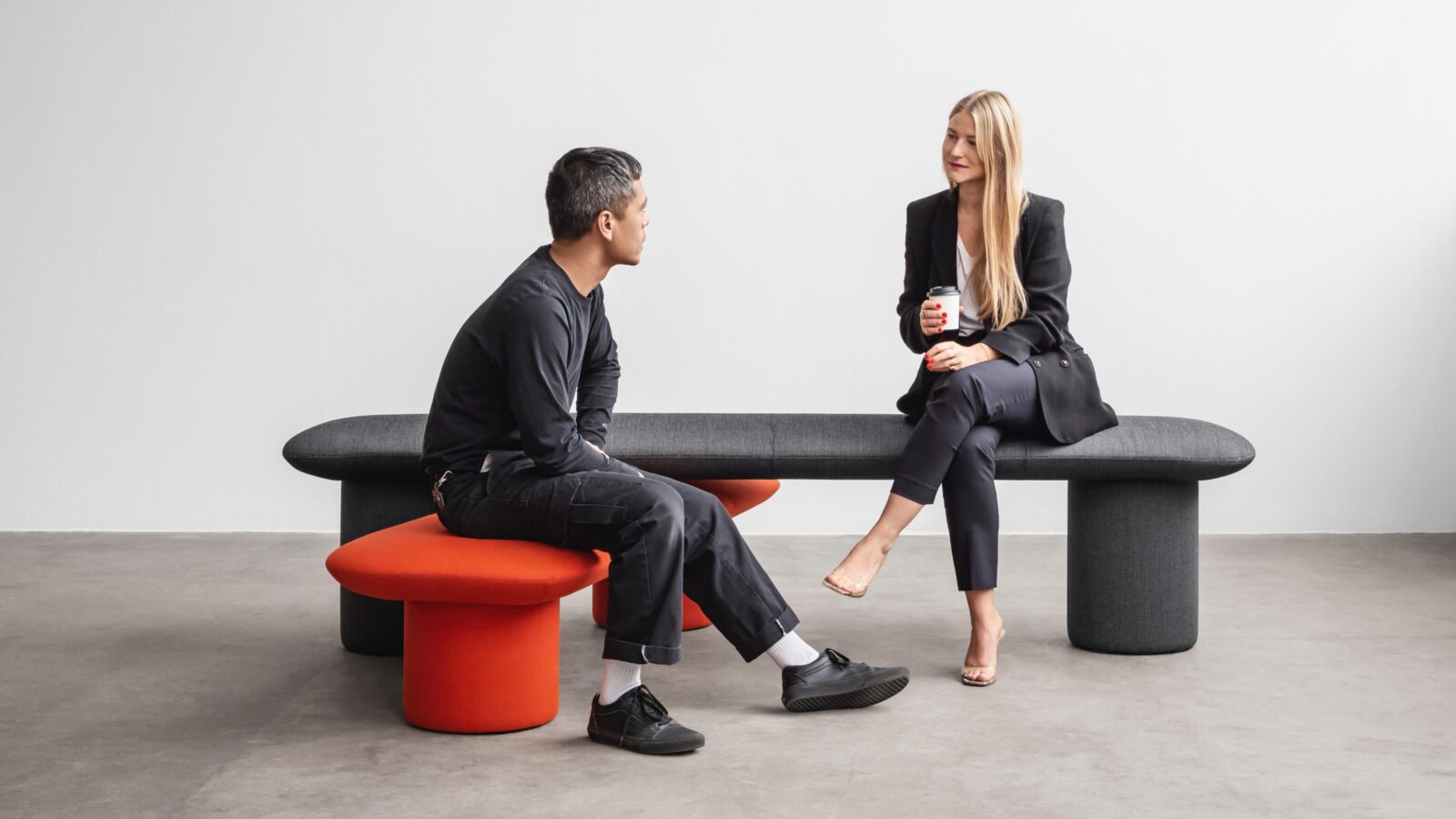 The design process adopted by Danish contract-furniture company +Halle is just as unorthodox as many of the pieces it generates. But it’s paying off for the boundary-
busting brand with more
dynamic collections.

Just after he’d joined the family business, Martin Halle, a former professional soccer player, found himself wandering the halls of a furniture trade fair and thinking that the displays could be instantly rearranged without anyone noticing the difference. Just take one chair from one stand and swap it in for a chair at another stand. Even though it was manufacturing upholstered contract seating of high, made-in-Denmark quality, his family’s brand, Globe Zero 4, also felt generic to him. “I really couldn’t see the point of doing what everyone else was doing, both in terms of the actual products that came out but also in terms of the process on the way to them,” Halle explains.

He wanted to create exciting, of-the-moment collections engaged with the needs of ever-evolving office culture — and thereby ensure that the company would remain relevant well into the future. And so, seven years ago, he completely rebranded Globe Zero 4 — transforming it into +Halle — and planted the seeds for a hybrid approach to furniture manufacturing called the Annual Briefing.

Although it sounds exceedingly corporate, the Annual Briefing is a novel idea: Invite three distinct design studios to brainstorm furniture concepts under a single theme (such as “dwelling” for the just-launched inaugural collection), send them back to their individual studios and then reconvene them for crits aimed at refining their initial proposals. The main purpose was to pivot the company away from what Halle saw as a flawed focus on aesthetics and toward a deeper understanding of the behaviours of people working in and moving through high-traffic contract interiors (the company sells to major firms like Google, Bang & Olufsen, Heathrow Airport and Microsoft). “As soon as you get the functionality, it becomes a more interesting design in general.”

To kick things off, co-owner and creative director Halle turned to the Swedish collective Form Us With Love, which had previously designed the elegant Nest seating line — “a game changer for the company,” says Halle — and had nurtured a close collaboration with the manufacturer. “The dialogue and collaboration with Martin has been as close as it can be without us going into a relationship,” jokes FUWL’s creative director and co-owner, John Löfgren. “It was a call-at-any-hour setup. And we wanted to bring more people into this family.” So Löfgren and his studio reached out to two other practices they admired: Toronto’s MSDS Studio (composed of co-founders Jessica Nakanishi and Jonathan Sabine) and the Scotland-born, Sweden-based designer Nick Ross. Neither of the studios had ever designed office systems.

From Sketch to Product: Boulevard 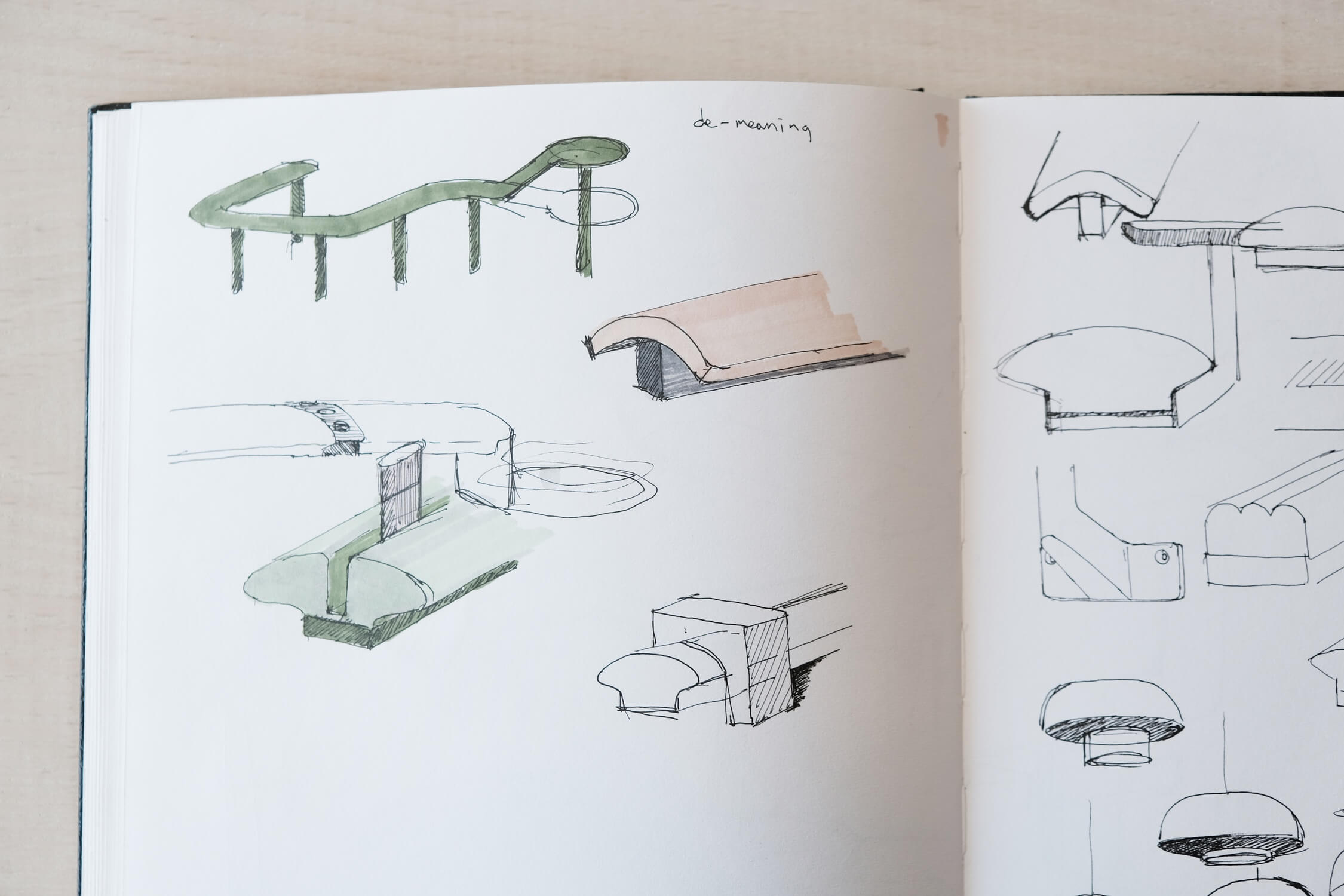 The beginnings of Boulevard, a sinuous, slender-legged bench system by MSDS Studio of Toronto. 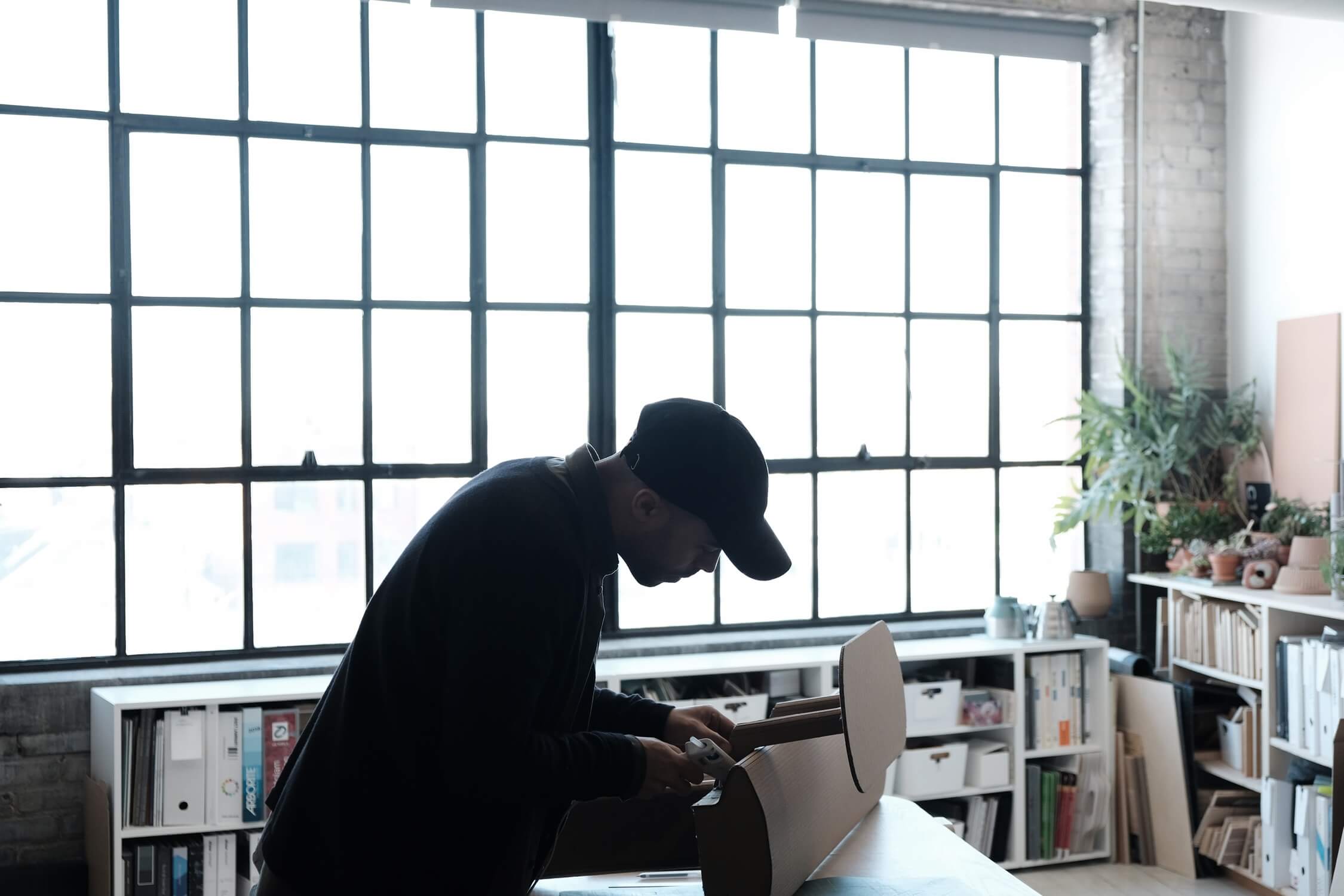 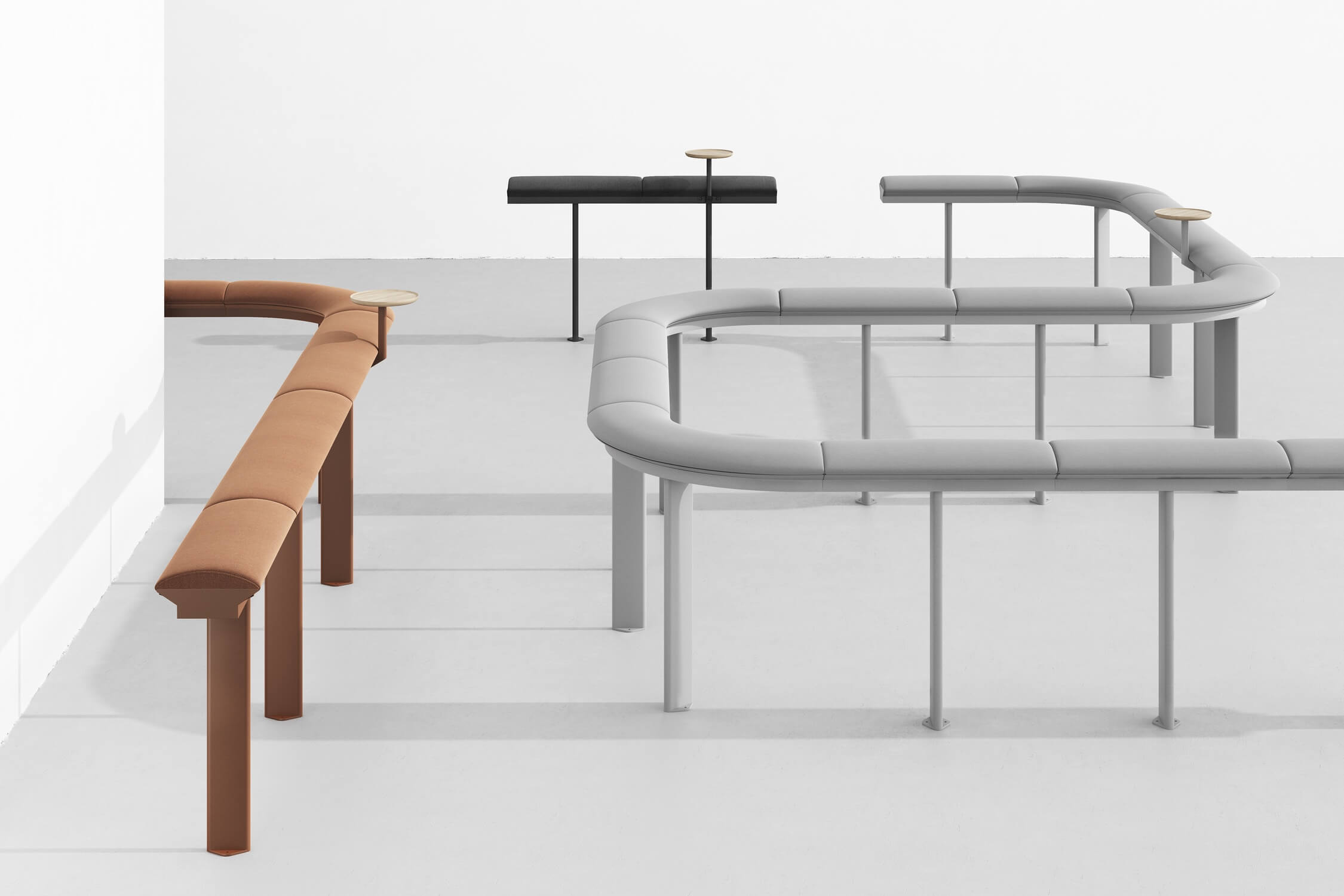 The system can be configured in many ways. 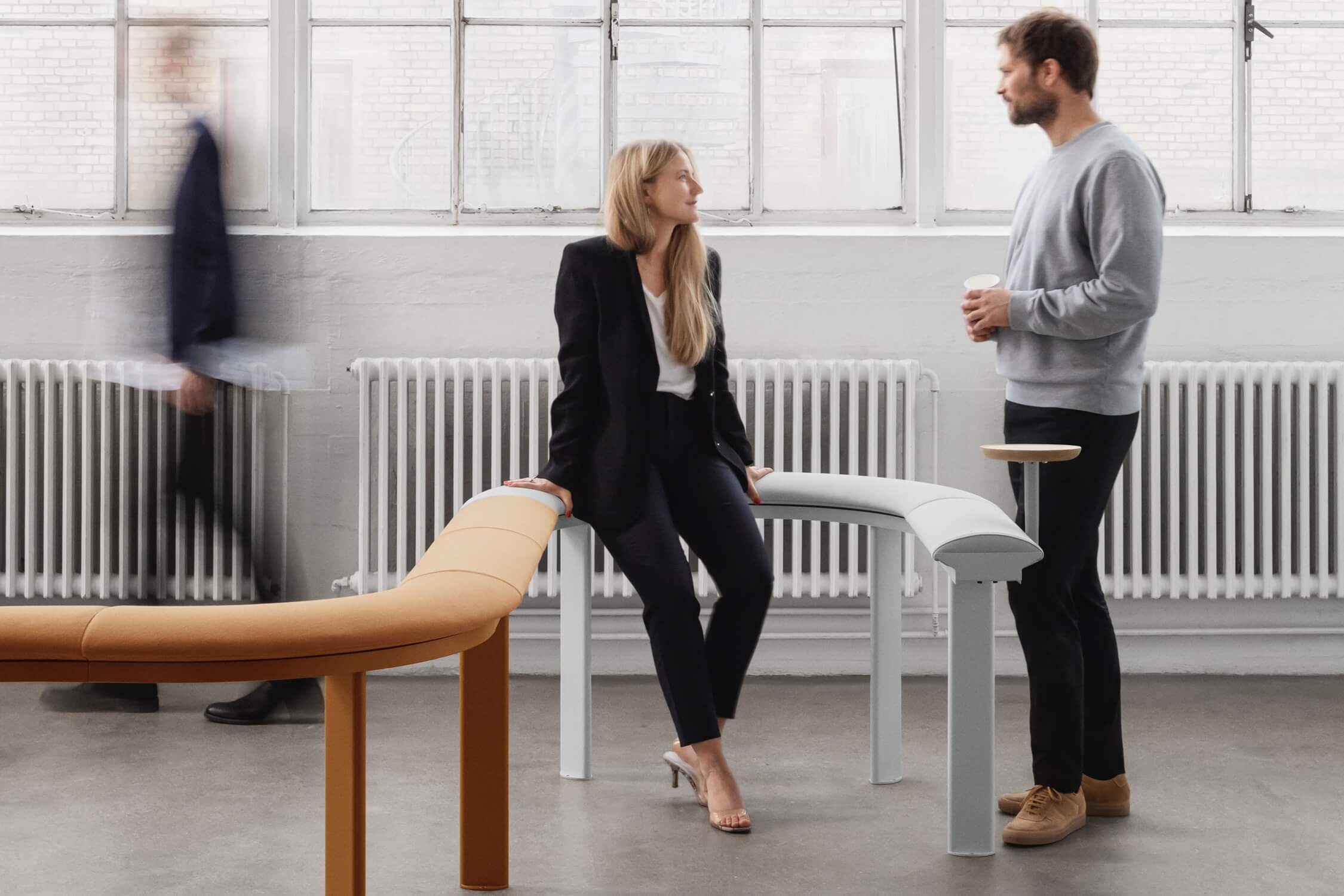 It accommodates “in-between moments,” such as making phone calls or checking email, and spontaneous chats.

Two years ago, the three teams gathered for what Ross describes as an “intense and overwhelming” first meeting (mostly because their conversation was being captured on camera). Otherwise, he says, “there were no egos in the room.” They discussed the idea of “dwelling” from various perspectives. “What came up in the brainstorm sessions for us,” says Sabine, “is that part of ‘dwelling’ in public is holding yourself in marginal seating positions, so we started to explore that.”

Initially, they came up with a one-off piece of furniture to lean on — a stool. Nakanishi elaborates: “This is something we do when we’re sitting and brainstorming or looking at sketches: We perch on the edge of a table. In that way, you’re in a relaxed and contemplative semi-active state. For us, there’s a market for something like this.” But the designers felt that the stool alone wasn’t compelling, so they moved on to a system, which had them grappling with modularity and proportion. “Most important for us, as designers, is the formal element,” says Sabine. “It’s easy to design a thing to perch on, but difficult to design a thing to perch on that’s also beautiful.”

FUWL started out by envisioning a piece that conveys “easy access,” like the staircase in a piazza. They began their formal exploration with an architectural component — a column — supporting a soft, wing-like surface. “The shape came together when we started overlapping the elements,” says Löfgren, “so that it’s more of a patchwork, and yet the elements are as simple as they can be.”

From Sketch to Product: Proto 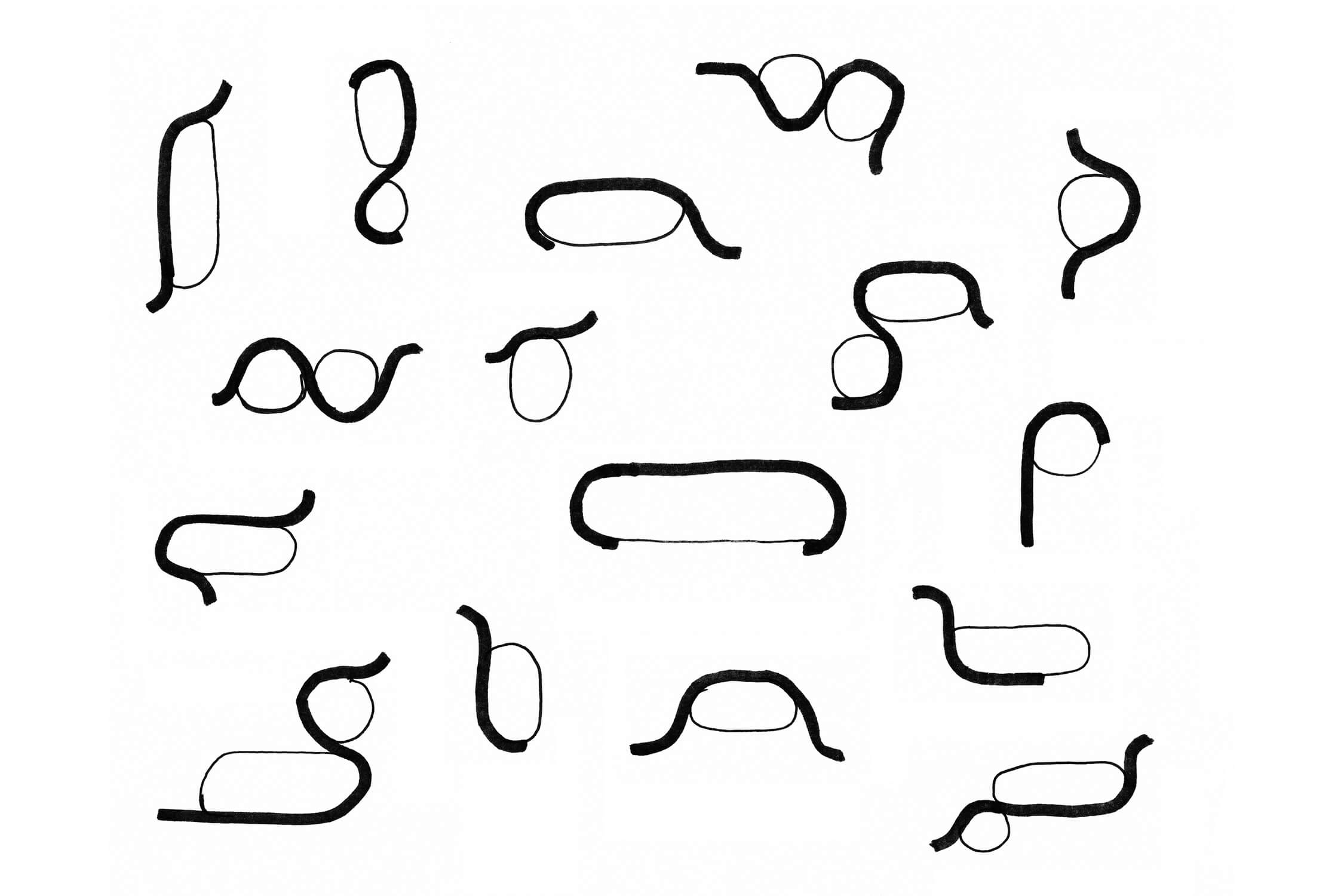 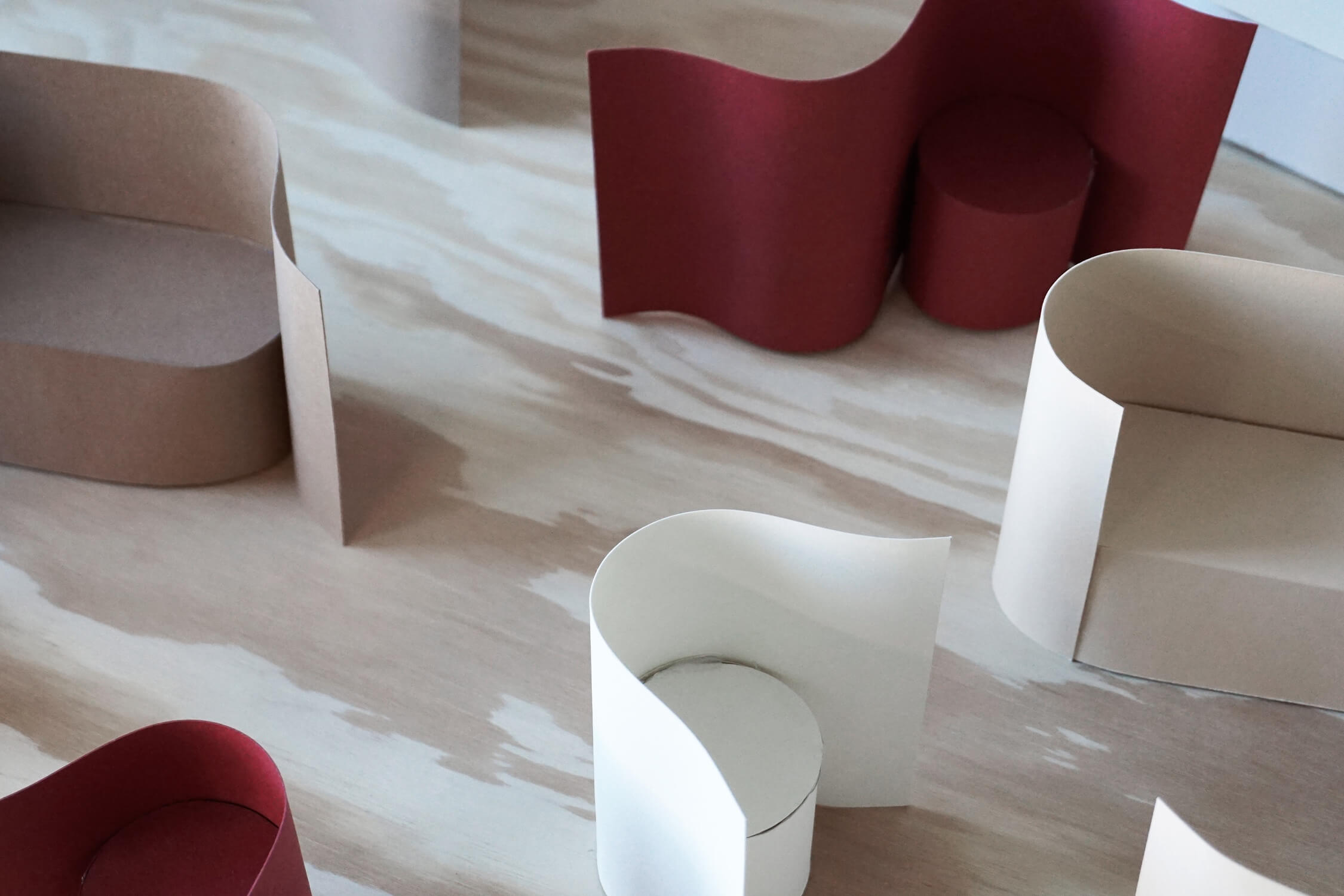 As he mocked up his pieces in miniature, the seating nooks became more prominent and the walls less so. 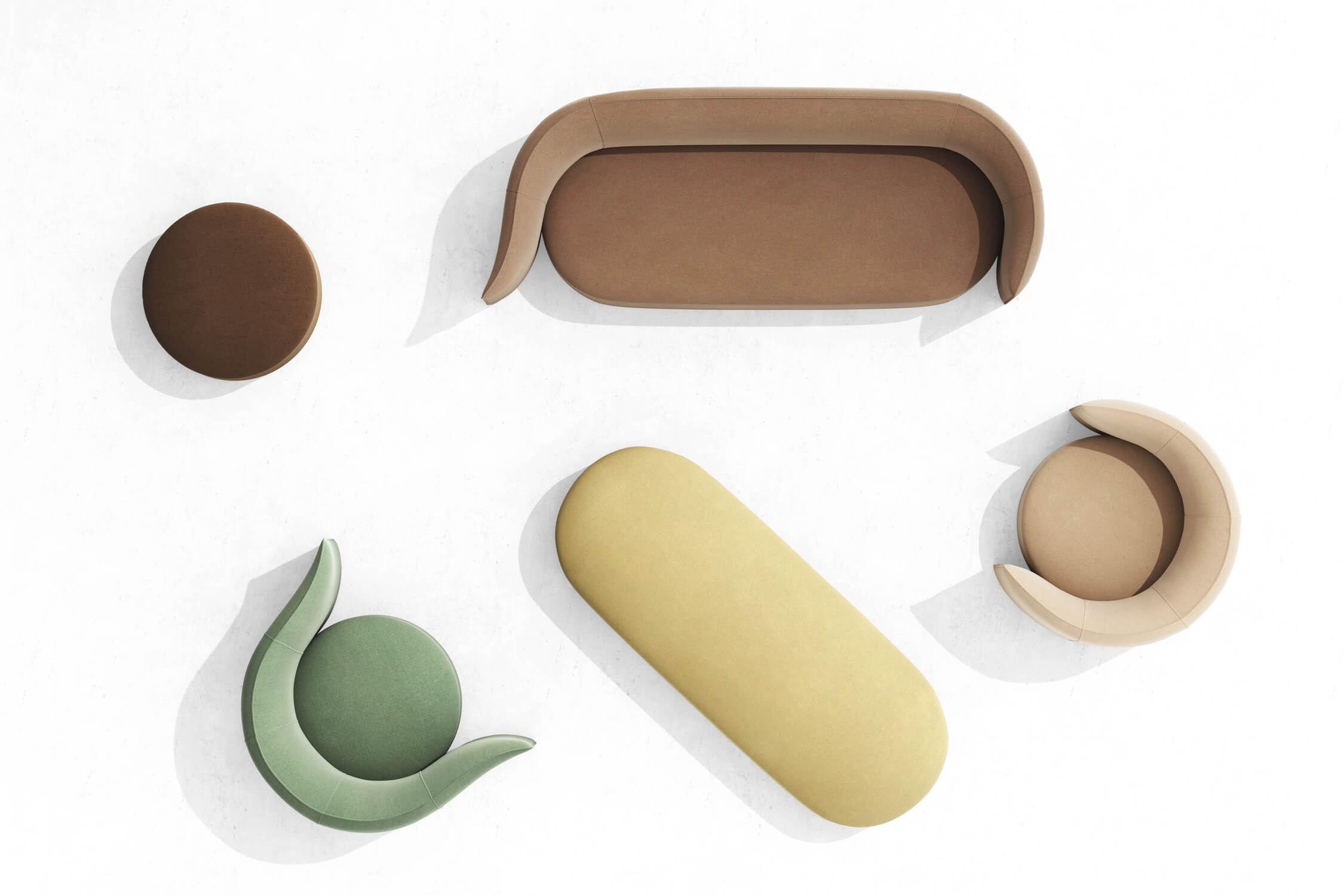 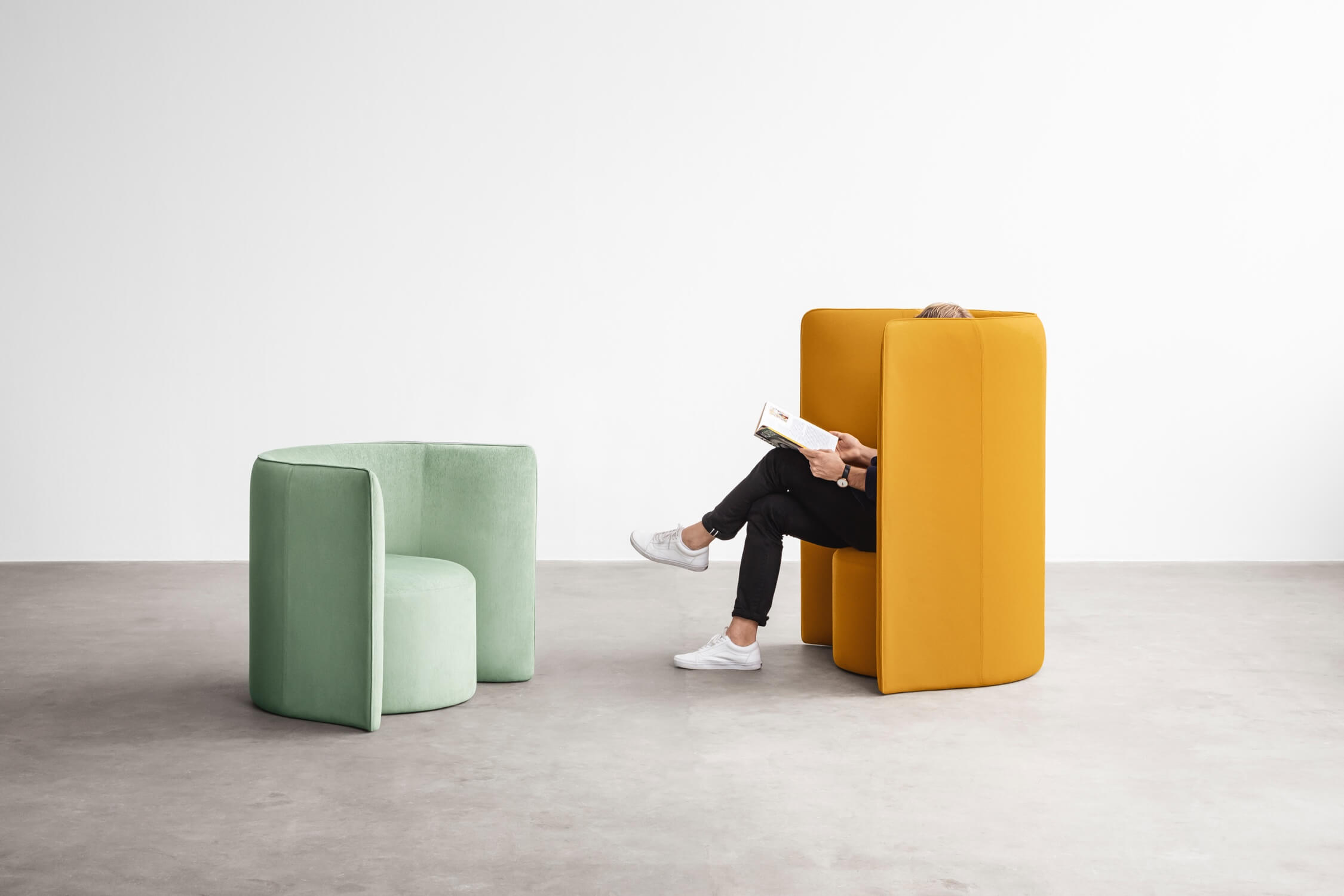 Proto is seating that provides a level of privacy (and coziness) in open-plan spaces.

Nick Ross, meanwhile, looked at basic early dwellings — mud huts and caves — and contemplated rooms rather than furniture. “This got me thinking about curvy shapes related to Stone Age structures — the need for a space but the lack of industrial tools to create straight walls.” He played with wavy screens and room dividers, then added niches and seats. “From there, I started making models, and the rooms turned into more and more chairs while the walls were cut. I didn’t know whether it was going to be an armchair or a sofa — it was more the idea of an enclosed space for comfort and seclusion, and later on it became a product.”

When it came time to present their work — Ross went to FUWL’s studio in Stockholm, but Nakanishi and Sabine, expecting their firstborn, Skyped in from Toronto — each suggested tweaks for the others’ collections. In Ross’s case, it was the addition of “a more classic element that could balance out the weirder ones.” As for FUWL, the process helped them hone a different skill set: providing constructive criticism. “What we’re doing as designers derives from passion, and that makes things personal. We’ve definitely learned that giving critique is a sensitive topic.”

The results show that it’s worthwhile: MSDS Studio’s sinuous, ultra-thin perching system, Boulevard, elegantly communicates that it’s a new type of seating, accommodating the in-between moments of sitting, standing and moving — a piece on which you can lean for a few minutes to check your email.

From Sketch to Product: Levels 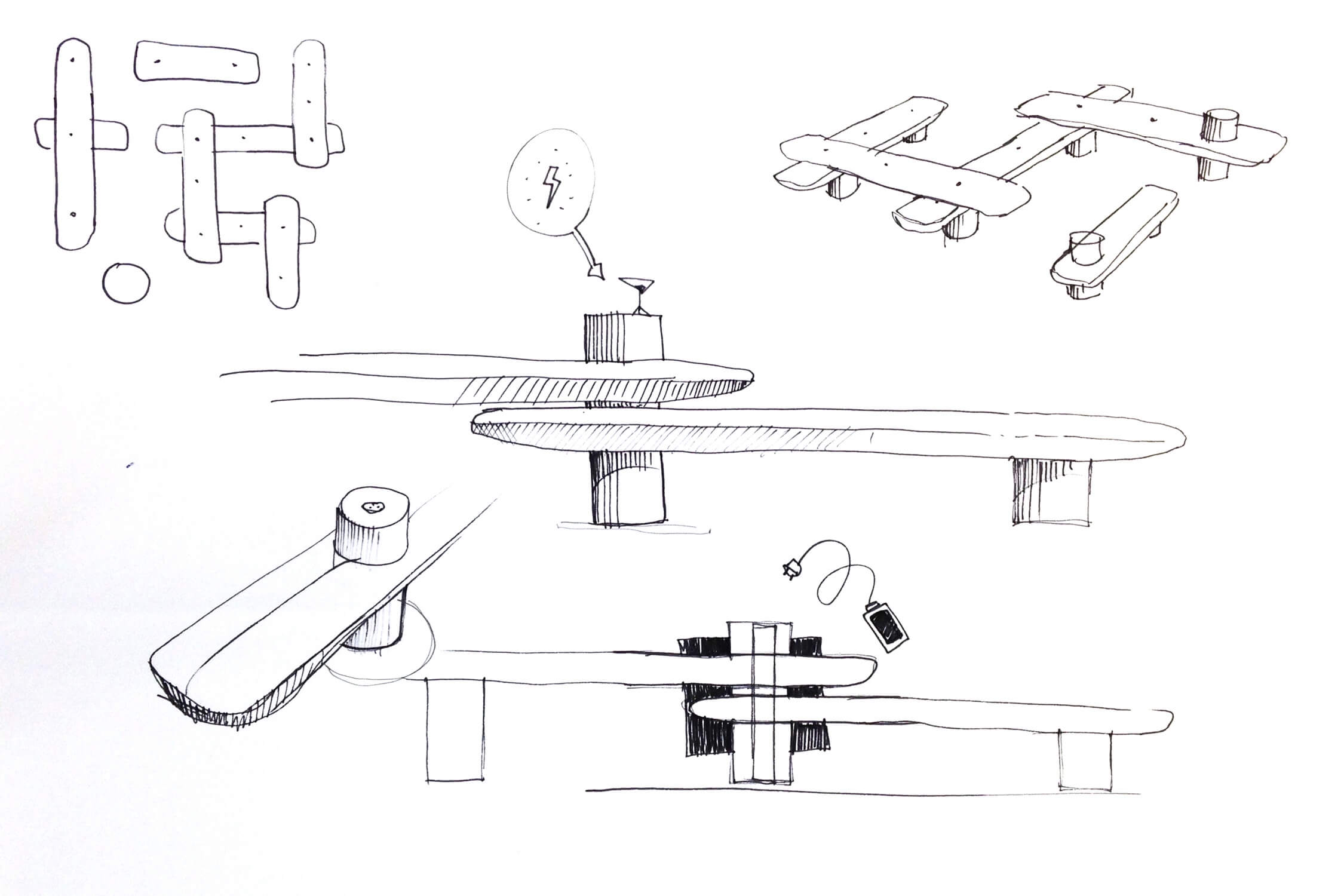 Form Us With Love sought to create a seating system that felt easy to access, like the staircase to a cathedral in a European piazza. 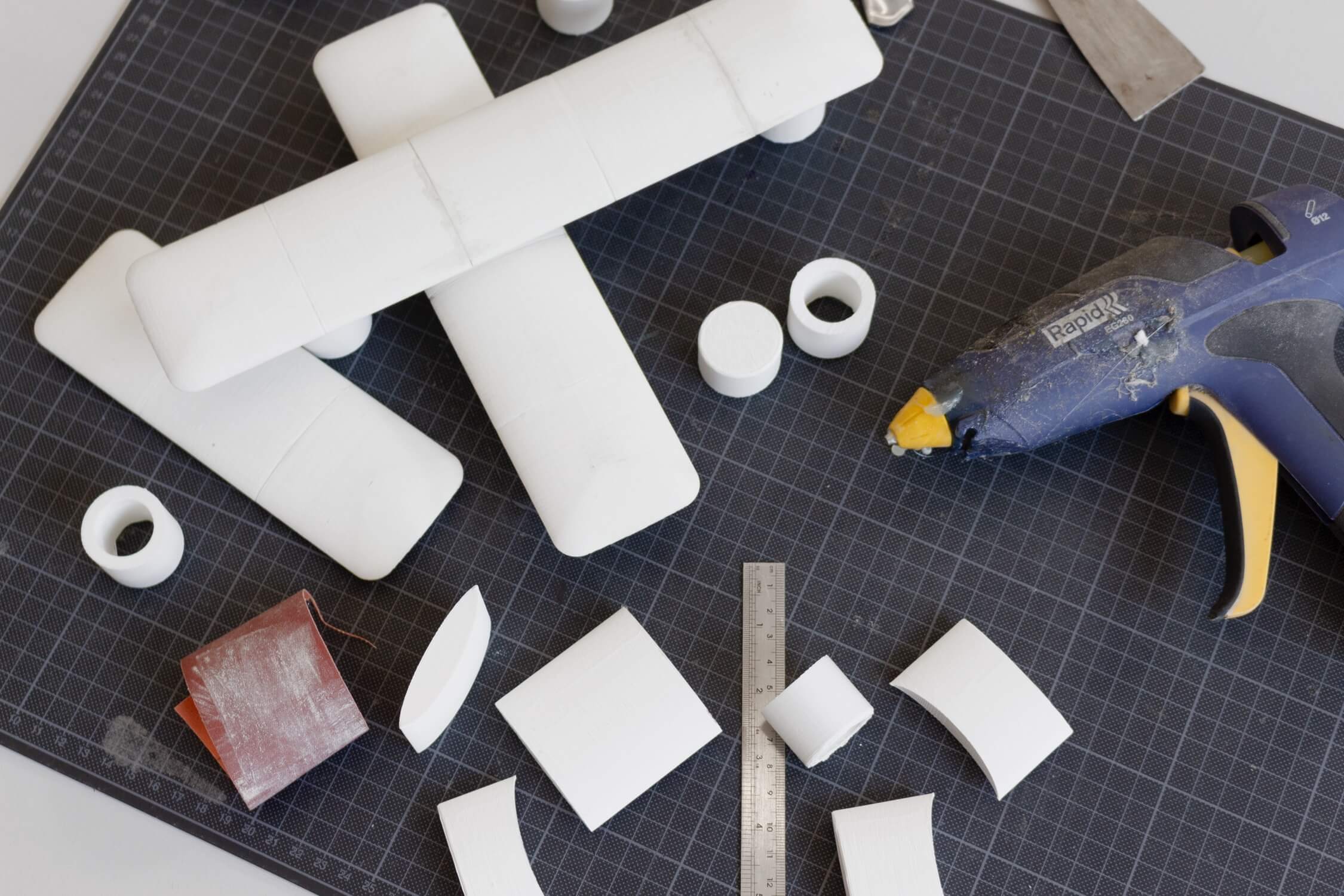 From the beginning, Levels was also an exercise in layering. 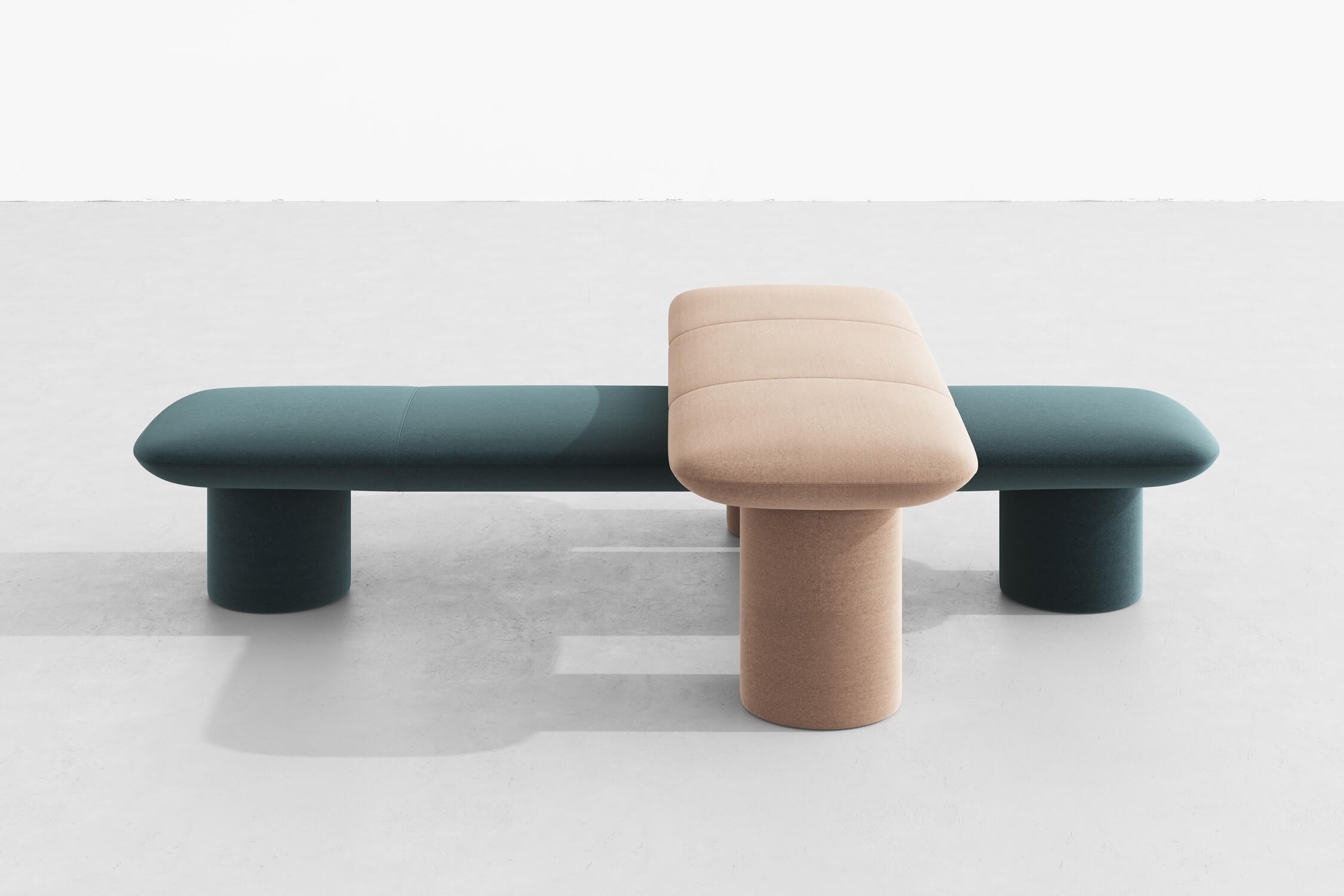 The modules are available in three heights and three lengths. 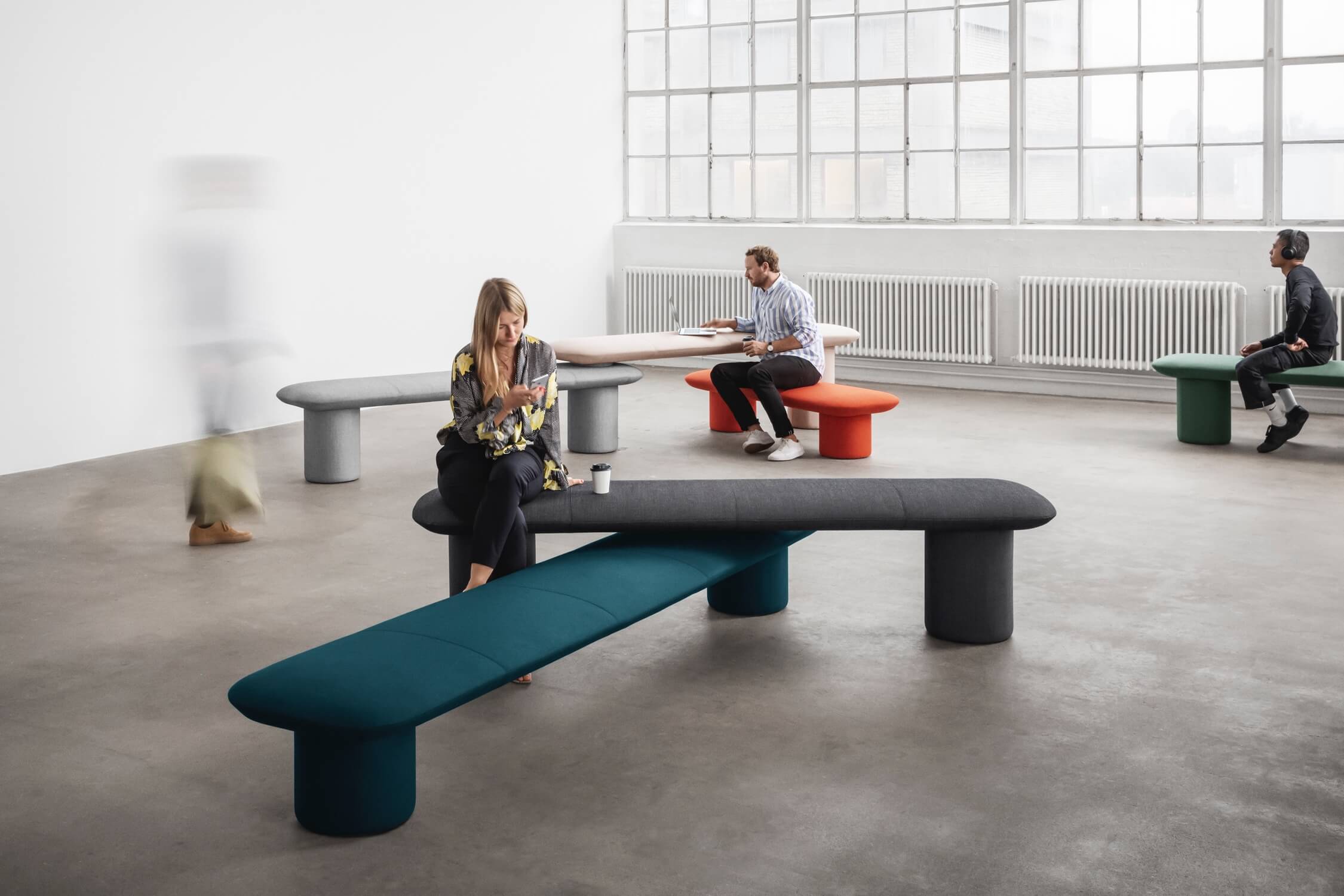 They can be configured to bring people together in untold configurations.

Form Us With Love’s Levels, a soft bench system in various lengths and heights that can accommodate “a quick lunch” or a “place for a short read,” can be layered to bring people together in intriguing combinations: “facing different directions, far apart and at different eye levels.” And Ross’s Proto, a series of curvy upholstered chairs, sofas, benches and ottomans, feels both traditional and newly sculpted to address the increasing need for privacy in bustling interiors. That all three ended up having a character related to time was also a result of the process.

The collection took two years from first meeting to final production. For +Halle, it was a big gamble, but the transition from its former life to its modern identity has already paid off. “Within the last four years, we’ve almost tripled our turnover. From a business perspective, it’s just common sense to me: We’re doing better products that are also selling better.” The new direction is also enticing to designers: A second Annual Briefing, with FUWL and Snøhetta, has already wrapped, and the third, with FUWL, Bjarke Ingels Group and Raw Edges, is now underway.

The design process adopted by Danish contract-furniture company +Halle is just as unorthodox as many of the pieces it generates. But it’s paying off for the boundary-
busting brand with more
dynamic collections.