In Russia, DROM Turns the Remnants of a Planned City Into a Bold Landscape

When it comes to the world’s planned cities, most have a checkered history, even if some of them have been touched by architectural greatness. In this latter camp, there’s Brasília, of course. And Australia’s capital, Canberra, has an interesting layout centred on axes aligned with topographical landmarks. Which brings us to Russia’s Naberezhnye Chelny, a lesser-known planned city built in the 1970s around the legendary Kamaz truck factory. Its main square, Azatlyk, was likewise designed around a formal central axis intended to link two landmarks: Naberezhnye Chelny’s city hall and a proposed Lenin museum. The cultural facility, however, was never constructed, making the axis meaningless and the square itself an instant relic.

Enter Rotterdam-based architecture and design firm DROM, which, in collaboration with Russian consultancy Strelka KB, not only reimagined Azatlyk Square in unexpectedly exuberant fashion, but just might have put a city known mostly to truck buffs on the radar of landscape-architecture aficionados as well.

In spirit and effect, the design team totally reoriented the plaza, relegating that formal central axis to one of its flanks, alongside an existing row of densely planted trees. In its place they installed a “city carpet” comprised of three distinct components: a paved “event square” used for weekly outdoor markets, a “green square” consisting of a lawn and gardens and a “cultural square” fronting city hall and the movie theatre inside it. 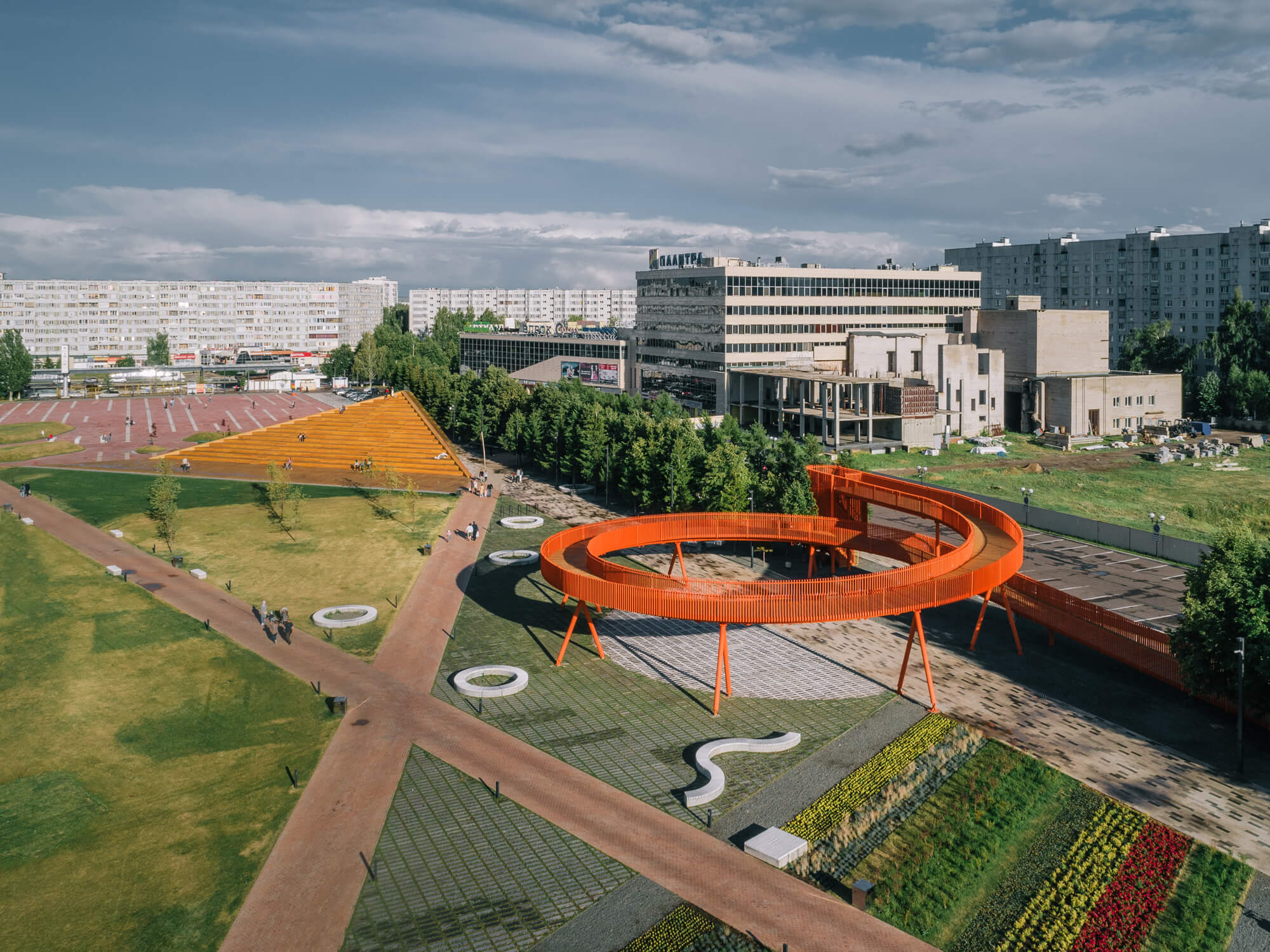 1The amphitheatre abutting a new paved market area features wood-plank stepped seating with a café underneath.

2In a nod to the city’s founding employer, the viewing structure overlooking the green square is painted truck brand Kamaz’s trademark orange.

3Designed by DROM, the plaza’s new benches range from sinuous to circular and were made in a local concrete factory.

At the point where each “square” meets the old/new promenade, dramatic anchors — including an amphitheatre-cum-café, a spiralling orange viewing platform and a combination wading pool and ice rink — energize the spaces.

Criss-crossing the carpet are new diagonal paths, which are accented with furniture and lighting fixtures also designed by DROM.

“Our renovation,” says the firm, “is a fresh take on the role of public space in the single-industry city.” Precisely as planned.