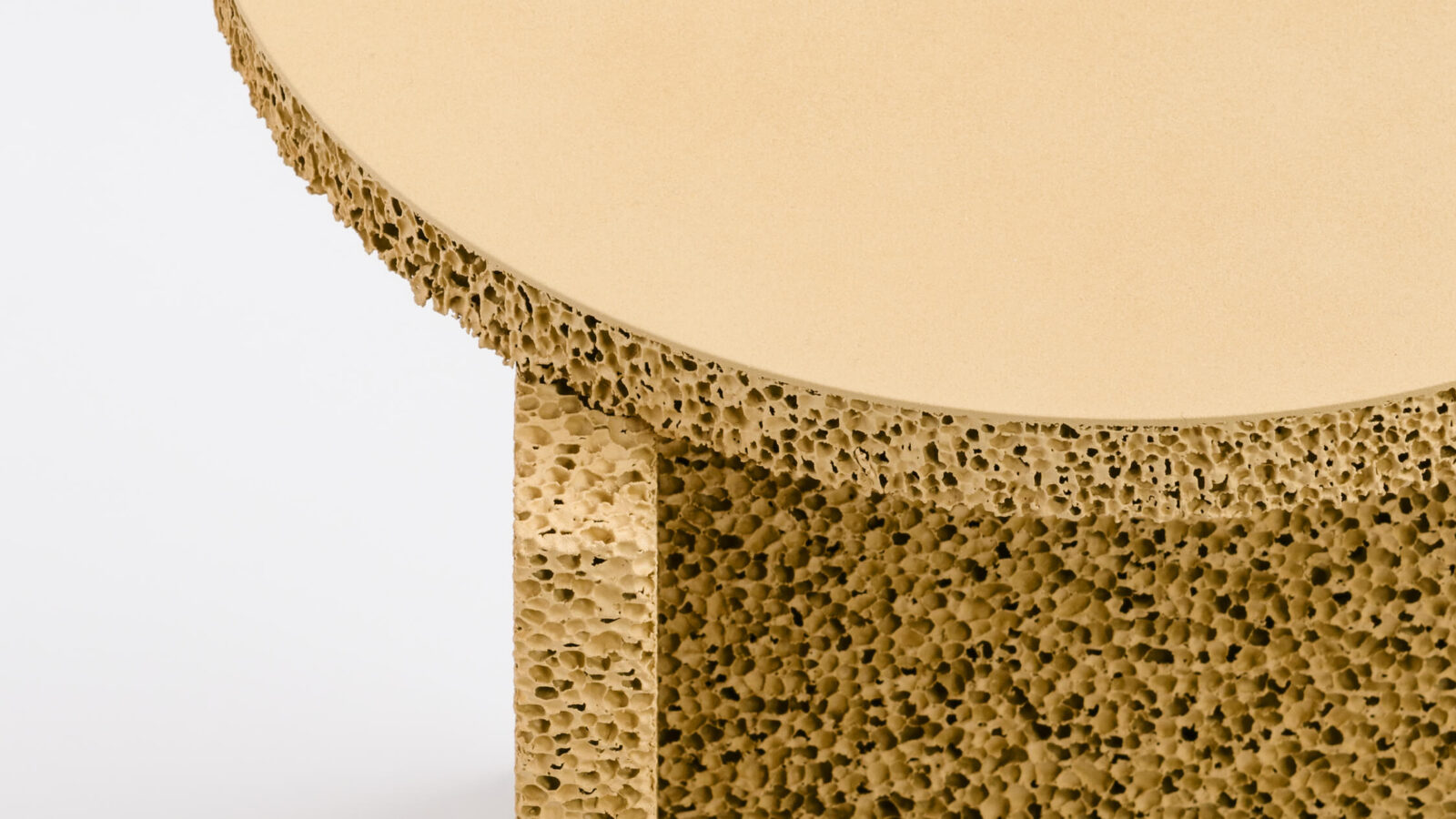 The Vancouver designer elevates a common building material into a luxury object with his recent Sponge Tables.

However, the variety that Knauf preferred proved harder to source than he assumed. What’s readily available in Canada has disproportionate, unevenly distributed bubbles, falling short of his desired intentions. “I wanted a true foam-sponge appearance,” he recalls. “I didn’t want to compromise my vision for a more convenient material.”

In developing the Sponge table, Knauf and his team created a series of scale models — first polycarbonate, then foam — before arriving at the final product.

Further research led him to the Chinese market, where panels have smaller, consistently round bubbles that are more uniformly dispersed. When he finally got his hands on some, Knauf began to re-imagine what the metal foam could be. Typically used for sound dampening and insulating, the product came to him in pieces, which he then water-jet cut. Anodizing them turned out to be an arduous process with unsatisfying results. And leaving them uncoated was too banal.

Ultimately, Knauf became more interested with the structure of the foam and less so in its peculiarity. After considering making a tray with it, he instead scaled up, creating models of his 2017 Lloyd Lamp with the material as the base and finally a table of a more impactful size.

“It came about in a way that isn’t so romantic for storytelling purposes,” the designer says. “But it’s also something I love because I hate fake narratives. Objects that don’t have a narrative never get the attention they deserve because there isn’t a story to tell.”

From anodizing to painting, Calen Knauf Studio explored a host of methods to elevate basic aluminum foam into a playful luxury object.

The final table stands on its own visual merits: a flat circular top and two perpendicular legs with exposed pores. Weighing in at less than two kilograms, the seemingly insubstantial piece is a calculated surprise.

“Before you touch it, it looks like sponge. It looks very light,” Knauf says. “But then, when you pick it up, there’s a surprising weight to it.” Available in both bright yellow (a reference to kitchen sponges) and natural khaki (the colour of sea sponges), it’s the side table equivalent of a wink.

The Vancouver designer elevates a common building material into a luxury object with his recent Sponge Tables.