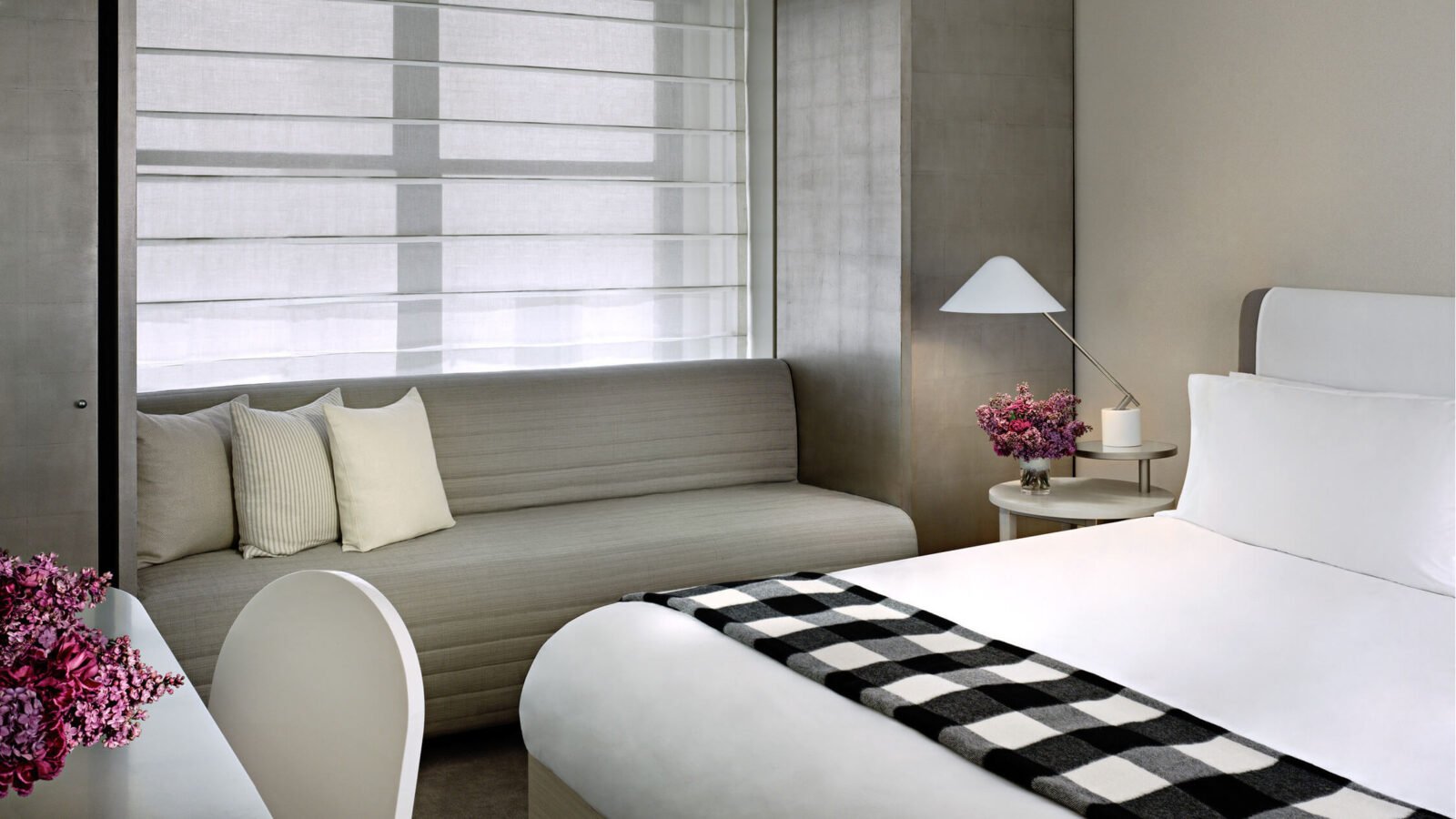 Andrée Putman and the Power of Confidence

For the grande dame of interior design and visionary of the first boutique hotel, everyone had taste – it was just a matter of personality. Read this story from Azure’s archives that has never before been published online.

In July 2017, New York’s Morgans Hotel shuttered its doors after operating for nearly 35 years. Tucked along the city’s trendy Madison Avenue with its small footprint and high-end accommodation, the renovated 1927 structure was a landmark of the hospitality industry when it opened in 1984: the first boutique hotel. Though spearheaded by Ian Shrager of Studio 54 fame, it was the Parisian designer Andrée Putman who crafted much of Morgan’s tailored image — crisp palette, refined furnishings, residential inspiration and the iconic checkerboard pattern. But, that’s only part of her story.

Designer Andrée Putman (1925 – 2013) trained as a concert pianist before shifting to design, establishing her eponymous studio in 1997. PHOTO: Xavier Béjot

Before revolutionizing the hospitality industry, Putman trained as a concert pianist, later working for a number of fashion and art magazines before establishing Ecart, a furniture company that re-issued the work of celebrated modernist designers like Eileen Gray, Antoni Gaudí and more. Much of the company’s success lead to the Morgans commission, and the avalanche of projects — ranging from hotels like the Sheraton to retail spaces for the likes of Balenciaga — that soon followed. In 1997, she established her eponymous studio centred on interiors, products and set design. Until her death in 2013, she remained a leading voice in shaping industry taste with her unique perspective. Speaking with Azure in 1998, Putman asserted that much of the taste and style she had become renowned for rests on a single attribute: confidence. It’s a fitting reminder for the generations to follow from the largely self-taught creative and grande dame of interior design.

This interview, from Azure’s archives, has never before been published online. It’s one of many exclusive stories we are making available on the occasion of our 35th anniversary.

You were never formally trained in design. How has being self-taught affected your approach?

People are so full of the notion that if you’re not the best in the class it means you’re stupid. I explain to them that if you are going to avoid school, you have to be intensely curious and passionate about your work. It’s always interesting to see the relief that brings. People are so nervous about having bad taste. Everyone has taste. It’s called personality. That is exactly my message. I want people to be more confident.

With 114 tailored rooms and a distinct residential direction, Morgans Hotel in New York (done in collaboration with Ian Shrager of then Studio 54 and now Edition hotels fame), inaugurated the boutique hotel concept.

You have said: “I think visual comfort is far more important than physical comfort.” That is an intriguing, provocative statement. How do you defend it?

I think serene comfort comes from visual simplicity. Not long ago I was in a house with charm, with life, with everything I like, children, flowers, animals – but there were so many things everywhere, on everything. You are quickly invaded by things don’t you think?

Everyone has taste. It’s called personality. That is exactly my message. I want people to be more confident.
Andrée Putman

The Au jeune Bûcheron table for Studio Putman Collection and the Fauteuil Sinuosa armchair for Poltrona Frau are among the Putman-designed furnishings populating the 2011 Fédération Nationale des Travaux Publics in Paris.

The old adage that your possessions end up possessing you.

I love that expression. It’s so true. 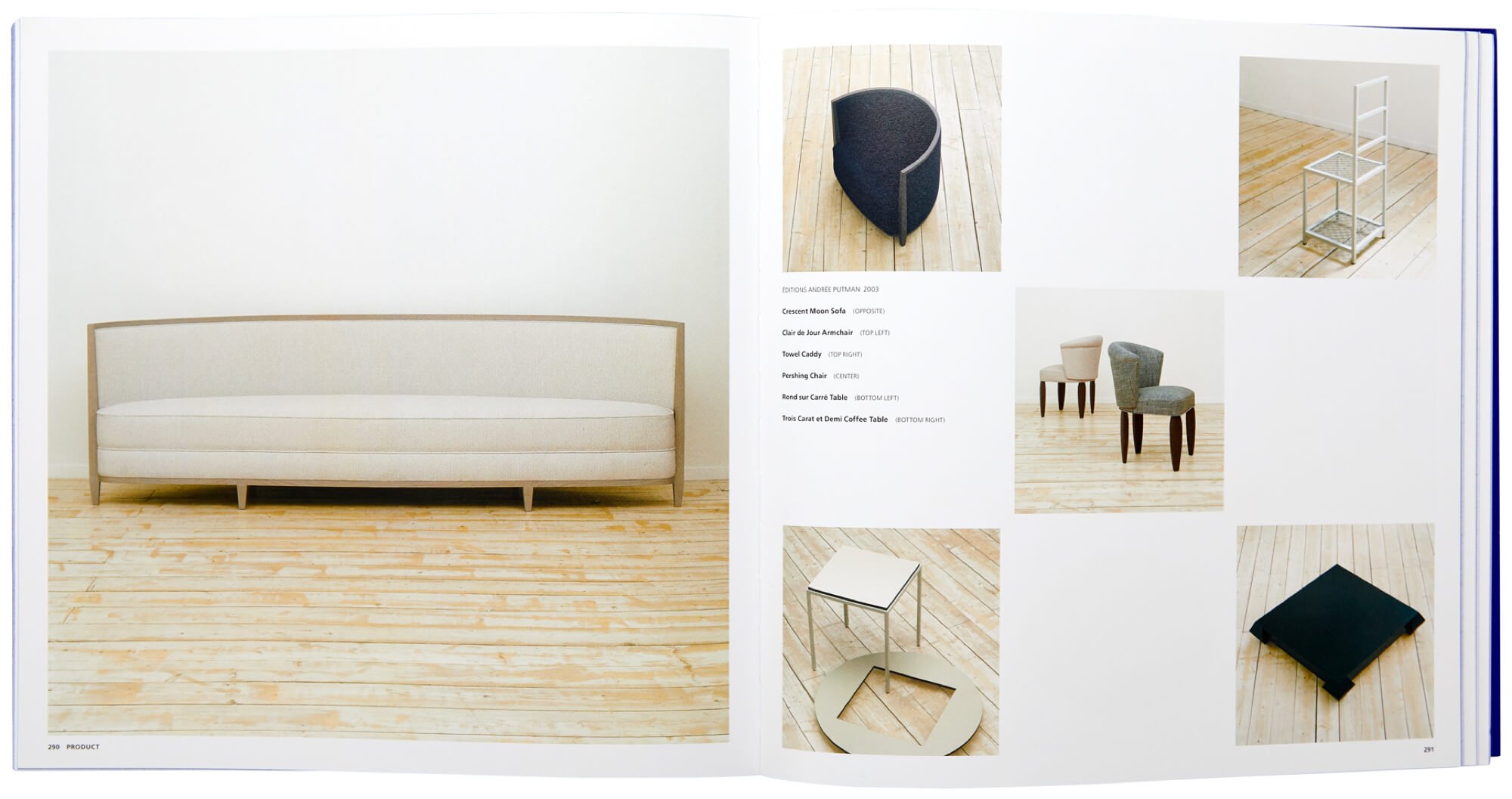 Putman’s work was the subject of an expansive monograph “Andrée Putman: Complete Works,” published by Rizzoli in 2009.

What do you think about Philippe Starck’s ideas of design and dematerialism?

I would never agree with that. Maybe exactly the opposite is going to happen. I think life becomes so abstract that there will be a reaction. I admire him and know him well. We have a nice relationship. He may be a brilliant designer, but he is in a kind of sick dream about the future.

In addition to her work with Shrager, Putman developed a number of interiors for leading hotel chains like the Ritz Carlton Wolfsburg, which opened in 2011.

I like what you said about using design to get closer to real life. Could you elaborate on that?

Yes. It has to do with people. For example, when I design a hotel room I think about what it is like to enter a room when you are tired. What is the best surprise I can offer?

I love to design the simplest objects. If you have passion about the work you do it will be experienced by other people.
Andrée Putman

Putman crafted a number of unique furnishings for Ralph Pucci International, a New York-based luxury furniture and lighting company. Many designs, such as the limited edition Pagoda Sofa, are still available today.

You have just this year launched an Andrée Putman collection. Could you tell me about it?

I have created many things already: a simple but fun collection of furniture in Japan that sells very well; several licensed rug collections, both wall-to-wall and area rugs. I am doing china, flatware, all kinds of objects for the home.

I love to design the simplest objects. But it has to be something that I would use. I have noticed that the times I did something I would never use myself (maybe twice in my life), it collapsed. If you have passion about the work you do it will be experienced by other people.

For the grande dame of interior design and visionary of the first boutique hotel, everyone had taste – it was just a matter of personality. Read this story from Azure’s archives that has never before been published online.