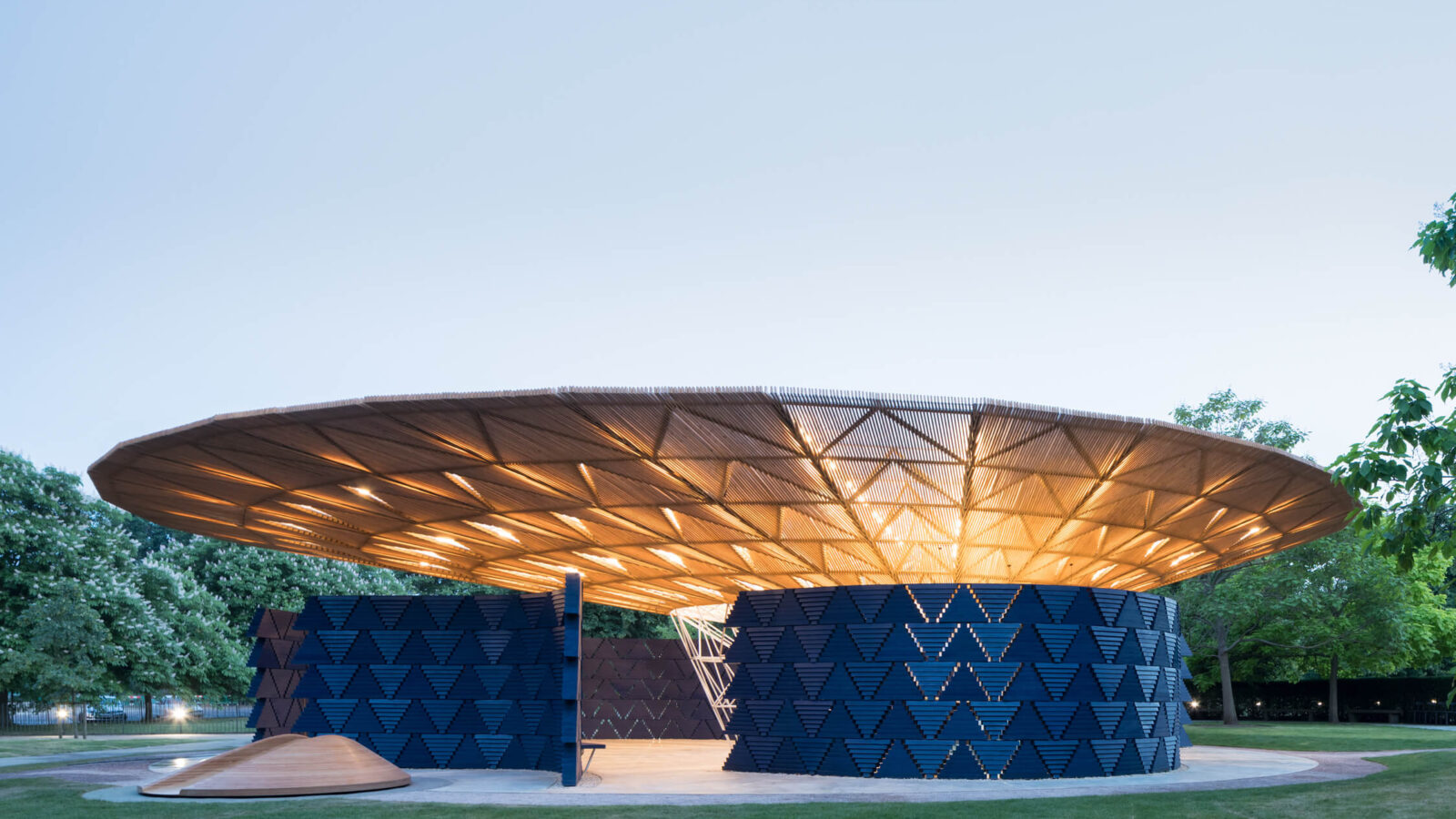 For the acclaimed Ghanian designer, architecture is a material practice rooted in the landscape — and a social force centred on community.

“Plant a stick in the mud. Maybe it will bloom into a building.” This is the advice that Diébédo Francis Kéré gave to the aspiring architects in the audience at Toronto’s 2020 Interior Design Show. He was speaking from experience. In 2004, the Berlin-based architect came to worldwide prominence as a winner of the prestigious Aga Khan Award.

The prize recognized his first project, a primary school in his hometown of Gando in Burkina Faso. Built from clay-cement bricks, the passively ventilated school combined sustainably minded material innovation with a contextual sensitivity inspired by the local culture and vernacular.

In the years since, Kéré has added an extension to the Gando Primary School, a secondary school, a dedicated school library, a housing complex for teachers and a grove of mango trees. Internationally, Kéré also designed London’s 2017 Serpentine Pavilion, Mali’s Centre for Earth Architecture and the gathering pavilion for Montana’s Tippet Rise Art Center. In each case, he used locally available materials and methods.

Today, Kéré is a global presence — and a practitioner of distinctly local architecture. He spoke to Azure about how the built world emerges from the physical and cultural landscape.

You started designing the Gando Primary School while you were still an architecture student. How did that happen?

It’s funny. When I was studying in Berlin, people from my  village called me to ask me to help raise money to build a new school. The school that had been in Gando — which was built as a temporary structure — was totally dysfunctional. So I fundraised. But then my teachers challenged me. “Why are you fighting to get it there and you don’t think to build it yourself?” they said. “You’re an architect.” I realized that the best way to help was to design the school.

I wanted to design a school and build it in the village to allow the kids to stay and get an education. I didn’t want them to have to leave — like I was forced to do — all because there was no school. I wanted them to be able to stay with their family, their friends, their siblings. Their community.

Why did you decide to use local materials?

I think to myself, “Lucky you, that you had the courage to start.” And that’s the advice I try to give to younger people: “Go. Don’t wait. Do it now.”
Diébédo Francis Kéré

We couldn’t afford not to. We had no resources to build a school out of concrete and glass. And besides, a concrete and glass building in Burkina Faso needs lots of expensive air conditioning to be comfortable, which isn’t what I wanted to do. So it came down to using what was locally available — and that was clay. I had to go and study to see how we could use the clay in a very different way.

The Gando Primary School launched Kéré’s career, cementing his ethos of building with locally available materials and in close collaboration with the community. He has since returned to the town many times to build further vital structures.

It must have been very difficult to get people to accept what you’ve described as a “poor person’s” building material. It wasn’t concrete and it didn’t look European or Western, like so much of the colonial architecture built throughout Burkina Faso in the 20th century.

People needed evidence. They needed to see it to believe in it. We didn’t start with the traditional way of building with clay, where there is no foundation. To demonstrate what would happen to a clay building without a foundation, we built a test structure that was exposed to water. We saw water seep up through it. So I said, “If we build a foundation, we will cut the flow of humidity.”

We built a series of test walls and exposed them to the elements. What happens if you don’t do it properly — with rainwater washing away the wall — is that it has to be rebuilt every year. I told people, “We will find a solution to make it better.” That is how we started to add a little bit of cement to make the clay resistant to water, for example. It was a long process, but we learned how to protect the clay. We also used local rocks to make a foundation.

We even built a clay arch to prove its strength. First, before we climbed up, we put heavy bags of cement on top. And then we jumped on it ourselves. We did many, many tests. The site became a sort of community workshop. 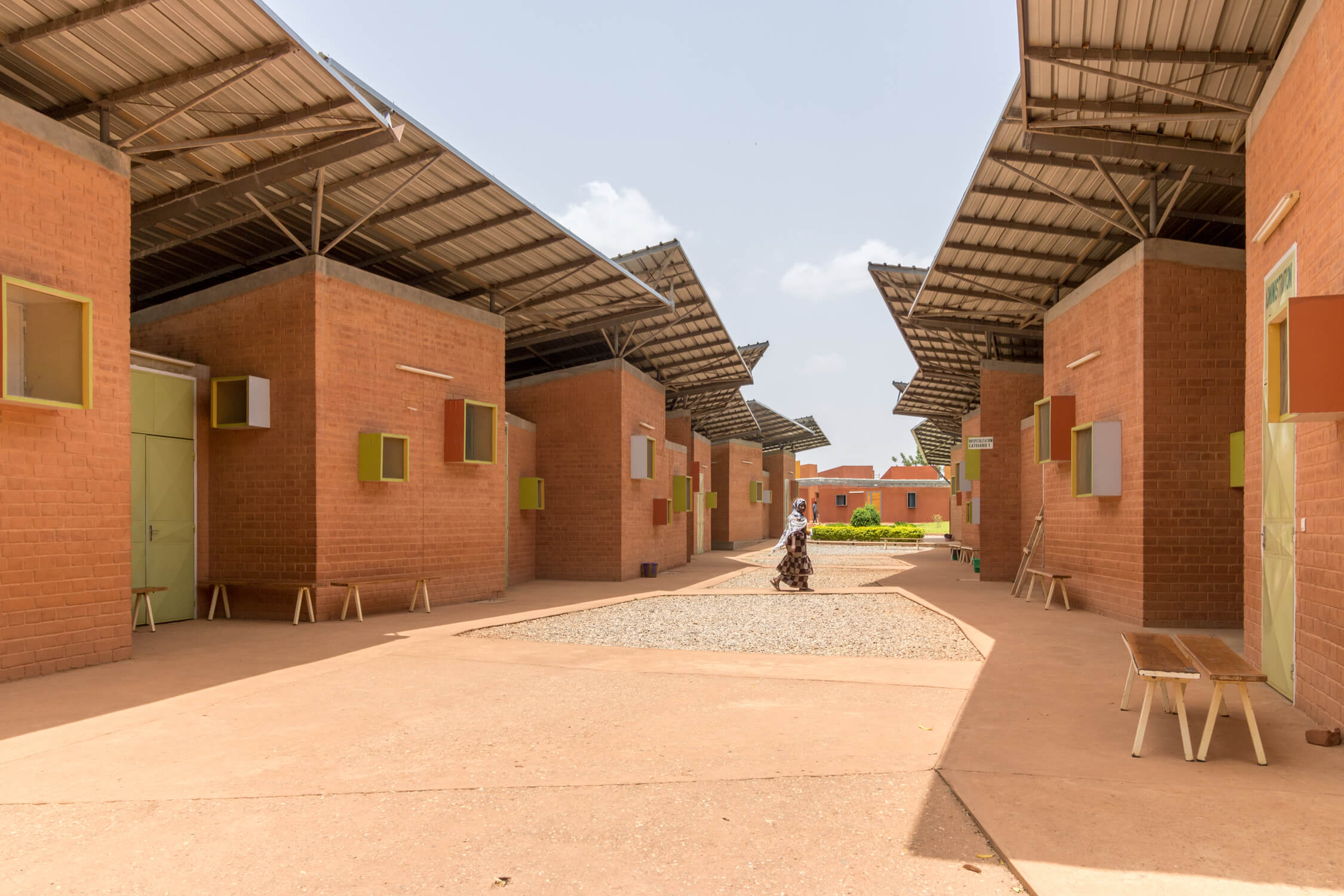 Also in Burkina Faso, Kéré’s Léo Surgical Clinic & Health Center is an ensemble of modules arranged around a central outdoor corridor. The setup allows for a variety of sheltered interstitial spaces that feel both dynamic and welcoming.

How did so many people from the village get involved with the project?

You know what they say in the village nowadays? They say, “Okay, we know Francis. He will come and say, ‘Let’s play, let’s play.’ And at the end, something wonderful will emerge out of what he says is a game.” So, let’s play. Let’s try. Whenever I go back to Gando, I’ll say, “I just want to play. Who wants to volunteer to help?”

Since the primary school building was completed in 2001, you’ve been returning to Gando regularly — and expanding the complex. Did anything surprise you about how people were using it?

Oh, yes. Normally there is no real maintenance for public buildings in Burkina Faso. But in Gando, the community has been taking care of the building. The surprising thing is even leftover material — like the wood that we used — is something that people are looking after. They’ll say, “Don’t touch it. Francis is coming again to use it to build something new — don’t use it to make a fire.” They protect it. And that was important to me to realize. “Wow,” I thought. “Something is growing — a sort of identity.”

What does it feel like to go back to Gando now?

It’s wonderful. I still want to push Gando forward. We want to create terraces, to create an oasis. I’m looking forward to seeing the trees grow. I think to myself, “Lucky you, that you had the courage to start.” And that’s the advice I try to give to younger people: “Go. Don’t wait. Do it now.” 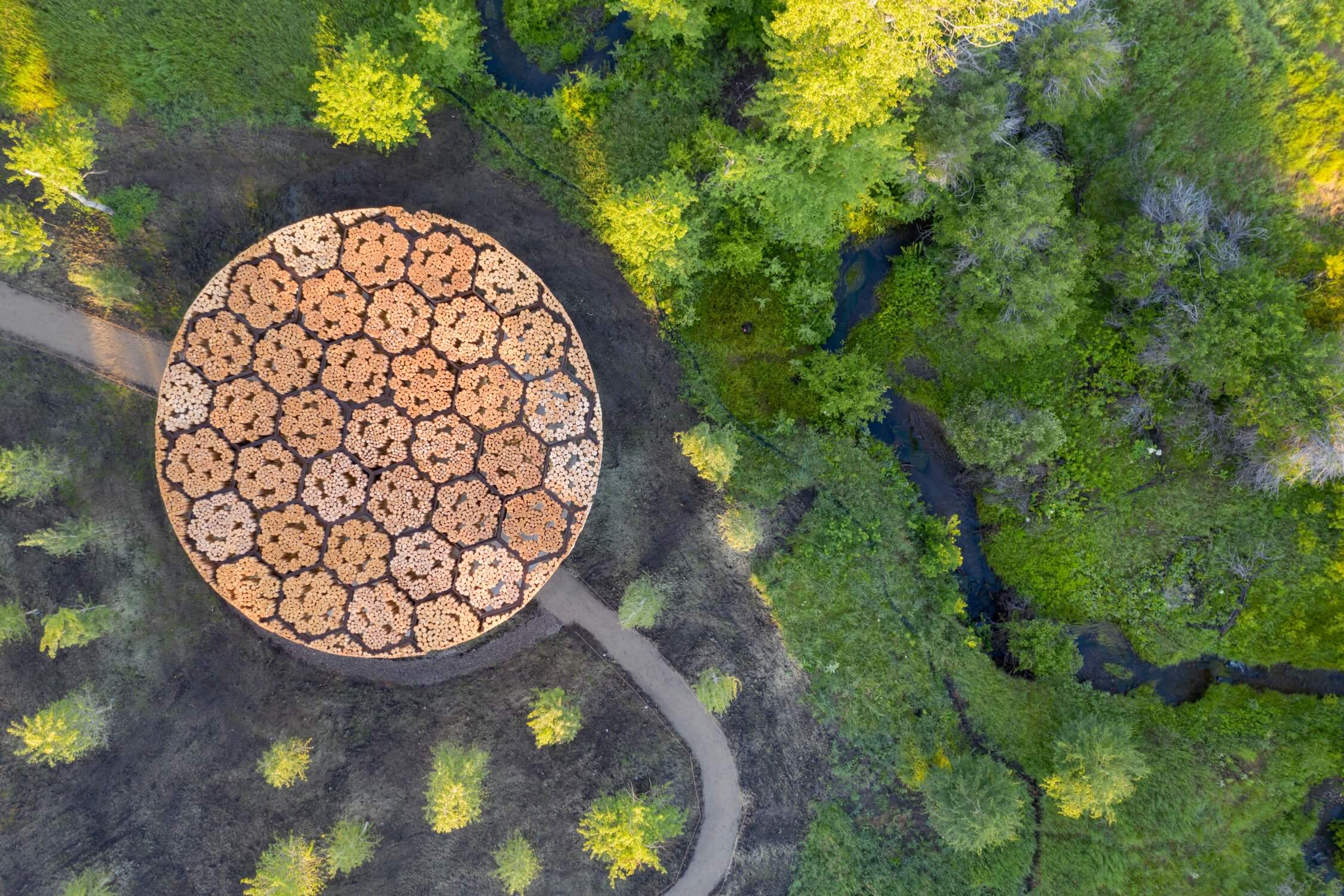 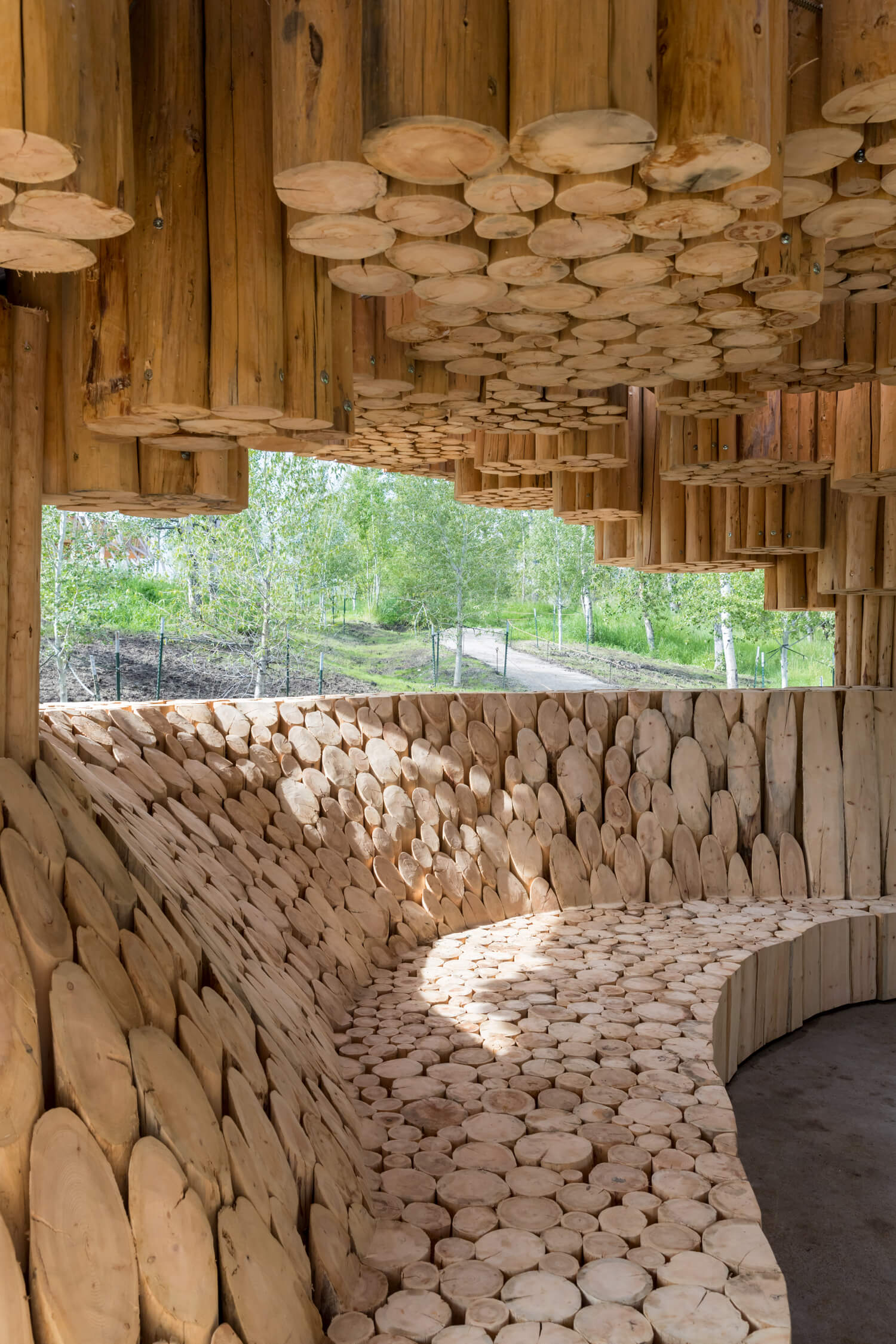 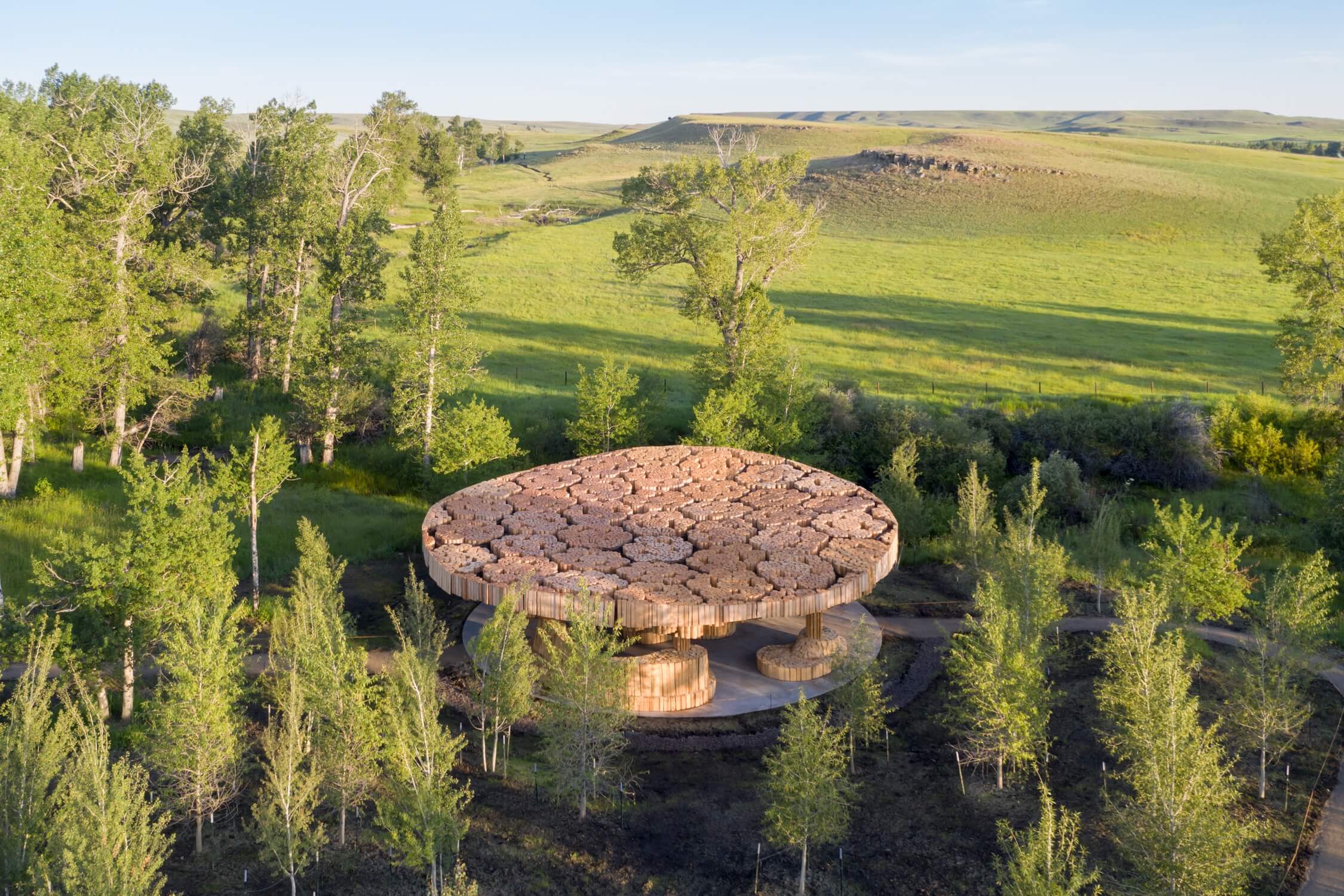 For the acclaimed Ghanian designer, architecture is a material practice rooted in the landscape — and a social force centred on community.