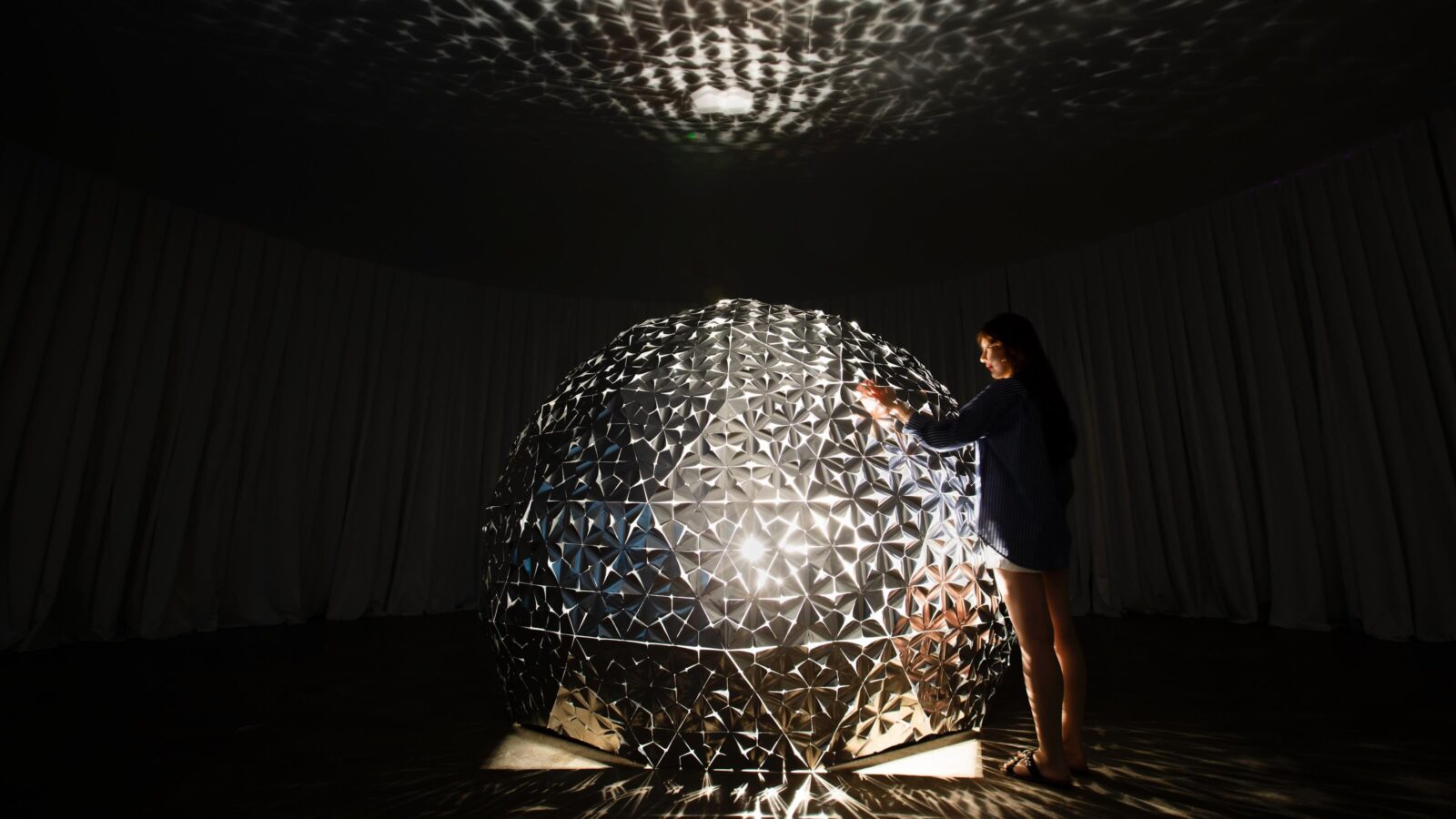 Daan Roosegaarde doesn’t waste your time: He follows a tight schedule in his Rotterdam studio and moves and speaks briskly. Yet he also makes regular trips to Rome to gaze at the Pantheon and to even warmer climates to go diving at night and marvel at the bioluminescence of tiny sea creatures. That all may sound contradictory, but it makes sense once you learn about Roosegaarde’s embrace of the whimsical, of his sincere recognition that, like most designers, he loves to control things — sometimes driven by his own fears — and so must regularly seek out experiences that require a bit of surrender, to keep finding balance.

Roosegaarde is best known for his vast public art installations, which often include new technology applied in an original way: a dance floor that captures the energy of revellers’ movements, a solar-powered bike path that glows in the patterns of Vincent van Gogh’s Starry Night, a smog-collecting tower in Beijing that generates cuboid gems for jewellery or, most recently, a tribute to the murdered Jews and Roma and Sinti communities of the Netherlands in the form of 104,000 gleaming stones. In his light-filled studio, you may find yourself sitting on a Friso Kamer chair modified to give you a small electric shock if you utter the words “Yes, but.” It’s to discourage visitors from saying anything that could undermine a good idea. Roosegaarde sat down with Azure to reflect on how he gauges the impact of his work, the underappreciated uses of beauty, and how he’d redesign the World Economic Forum. 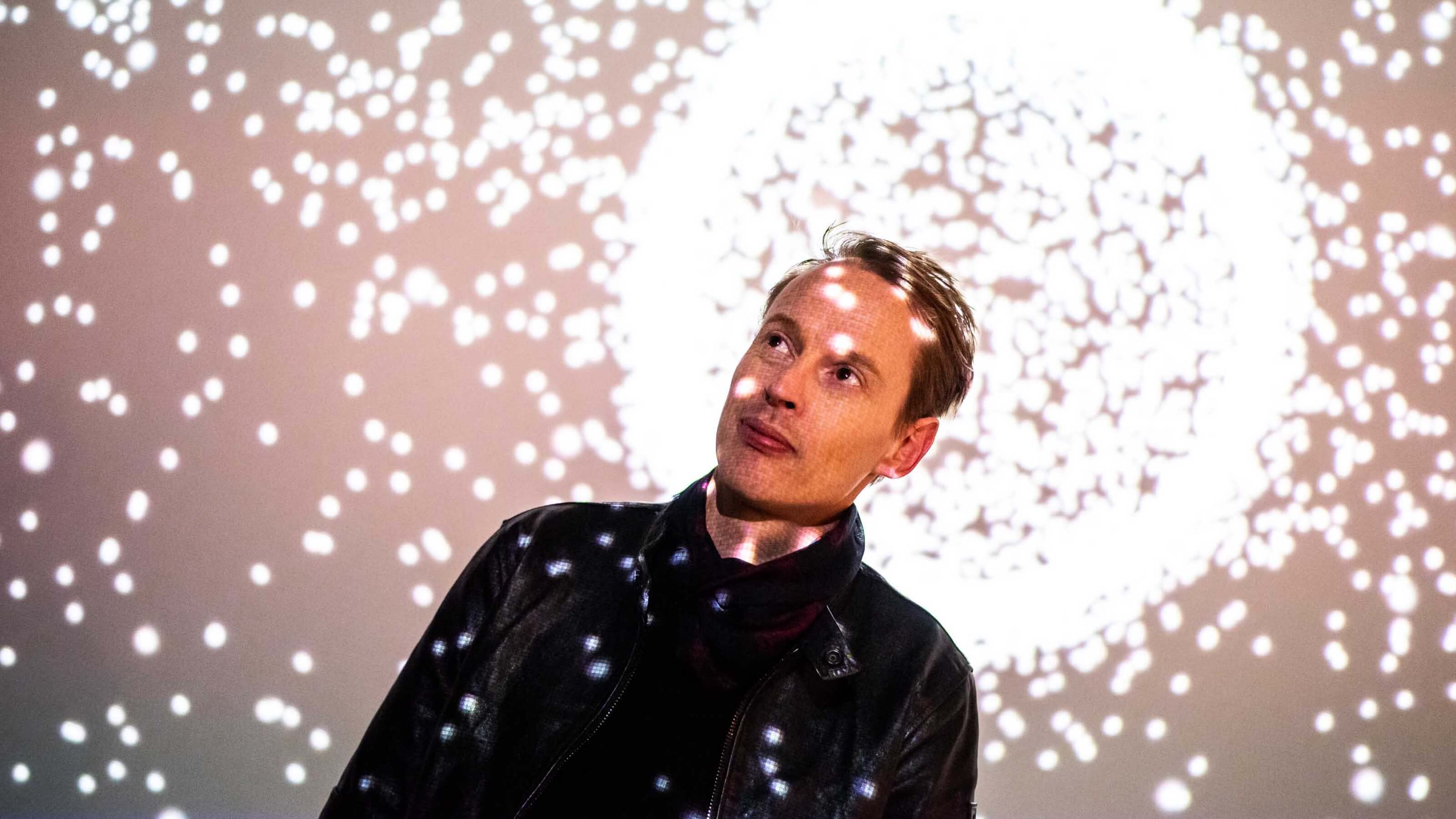 How do you consider the impact of your work? And when do you know that you’ve really succeeded with a project?

A lot of what we do is about demonstrating the possible. We are, as I like to say, practising “protopia,” showing that it can be done by delivering prototypes to the world. It’s an interpretation of an idea that originated some time ago from the writer and futurist Kevin Kelly, of seeking continual and incremental changes instead of hoping for a utopia or fearing dystopia.

We set out to bring change by constantly iterating; by being relentless in creating, we show that creative capital is the most valuable asset. Still, this is hard to measure. And that brings me to the flaws in our economic models. I just visited the World Economic Forum in Davos, where I spoke with the head of a huge bank. I asked him what clean air costs, and he couldn’t come up with an answer. We can price gold down to the gram but don’t know how to value clean water or air, resources that most would agree we all have rights to. The missing price is about the missing value.

That’s what drives a project like the Smog Free Ring, which is sold for the cost of cleaning 1,000 cubic metres of air with the Smog Free Tower. It’s an object that helps you think about the air around you and also looks good; it has even become popular with couples getting engaged. I realize this just begins to fix the climate crisis, but it’s a perspective-shifting opportunity, a poetic statement about values and intentions. 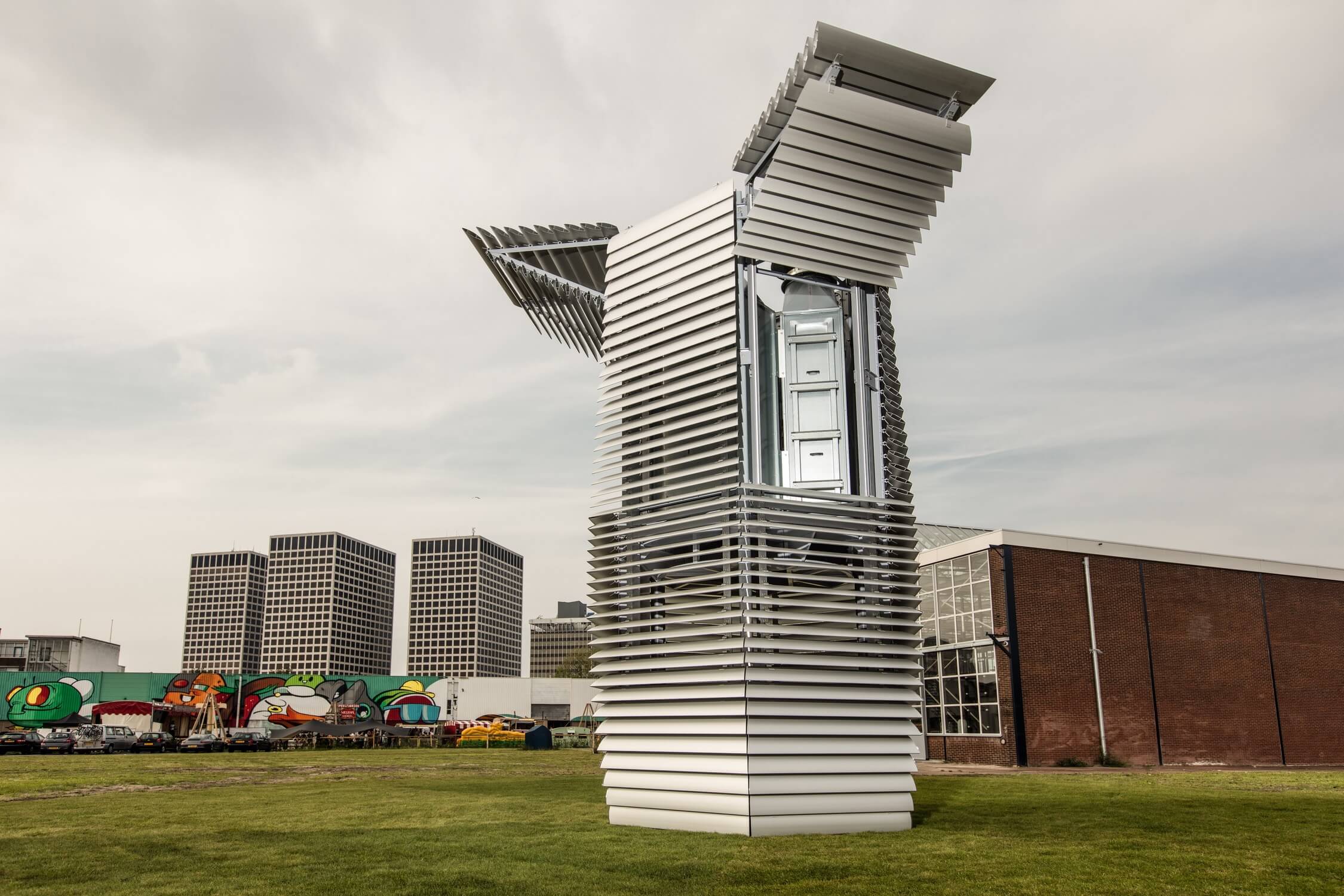 Smog Free Tower has travelled the world, from China and South Korea to Poland and the Netherlands; it removes smog particles from the air within a radius of up to 50 metres.

The Smog Free Ring works on a personal scale, and then there are your large public installations. How do you leap between these scales and how they relate?

Sometimes the larger installations, like the van Gogh bike path, have unexpected, smaller-scale effects — that project now appears in a children’s book about the life of van Gogh, which just surprised and delighted us.

Another way that scales mix in an interesting way is the Levenslicht project, which uses glowing stones to represent the Jews, as well as the Roma and Sinti communities, from the Netherlands who were murdered. Of course, with something as profound and awful as the Holocaust, you can never really understand it. We tried to be careful with the commission; we understood from the beginning that there was a chance we could upset a lot of people. But as we developed ideas, we talked with survivors, historians and others, and we listened. The ultimate concept worked so well, I think, because we brought it down to a human scale: stones that you could touch.

This scale-shifting is maybe one of the best things our studio does: taking a huge issue and making it tangible and personal so that anyone, whether they’re nine or 90, can appreciate some layer of it. 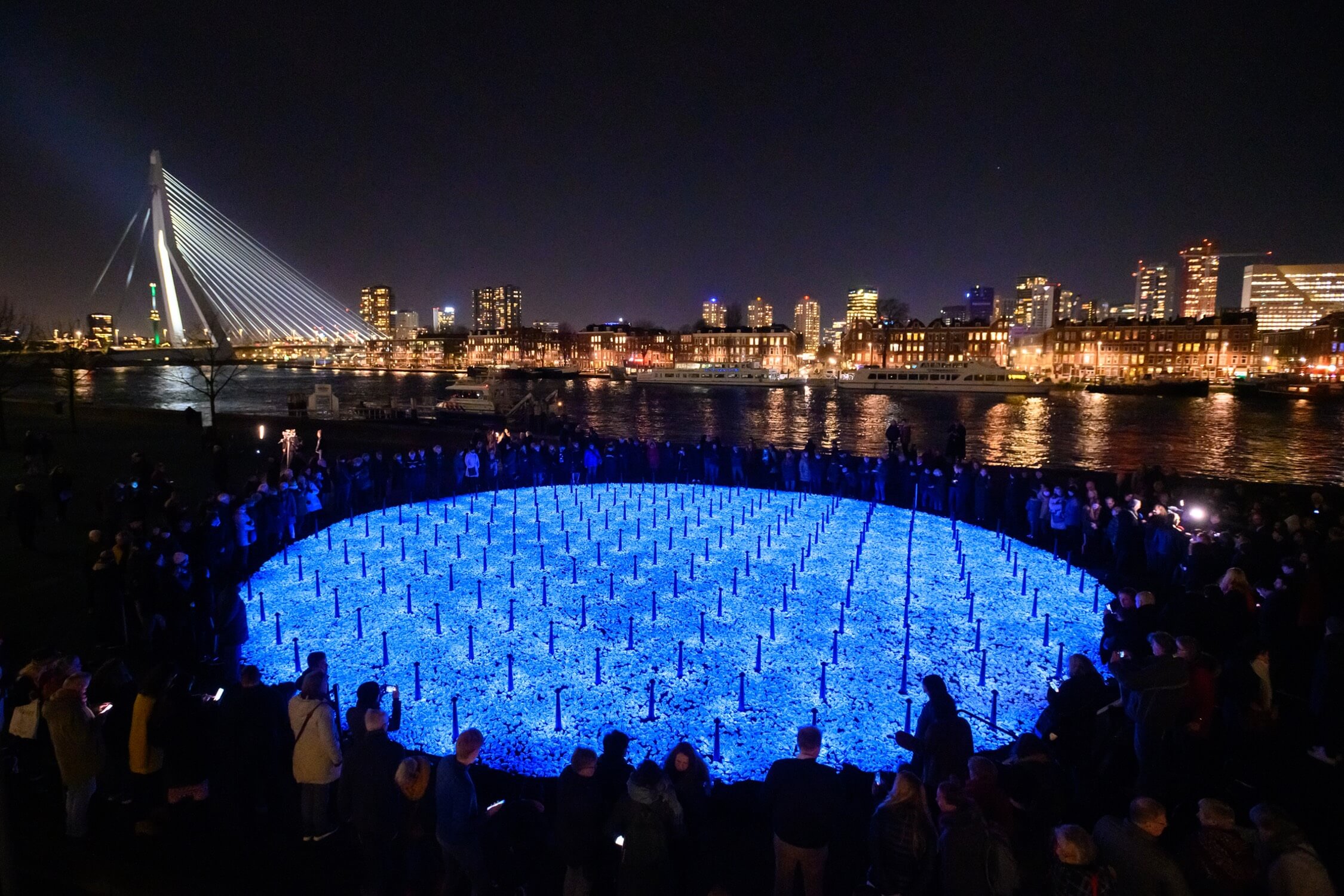 This communicative value of the studio’s work is really interesting. How do you use different tools, whether technology or aesthetics, to speak to people from all walks of life?

This scale-shifting is maybe one of the best things our studio does: taking a huge issue and making it tangible and personal
Daan Roosegaarde

This is a good opportunity to talk about beauty. Beautiful experiences get people on board, encourage them to accept change, to let go of what they know. This power is underappreciated. The Catholic Church knew all about this: It funded architecture, painting, sculpture, stained glass — all magnificent — in the service of conveying ideas in beautiful vehicles.

Our Space Waste Lab is a good example of taking something profound and adding a dose of beauty to amplify its effect. The multi-billion-euro mission to reduce space junk includes crashing bits of it into the atmosphere to harmlessly disintegrate it; in the burn-up, it creates what looks like fireworks or shooting stars — dramatic light. We can use that as a replacement for fireworks, which are polluting, expensive and dangerous.

Of course, there are engineering problems to overcome in collaboration with the European Space Agency, but what we at the Lab can add is that one or two per cent at the end — the value for everyday people. 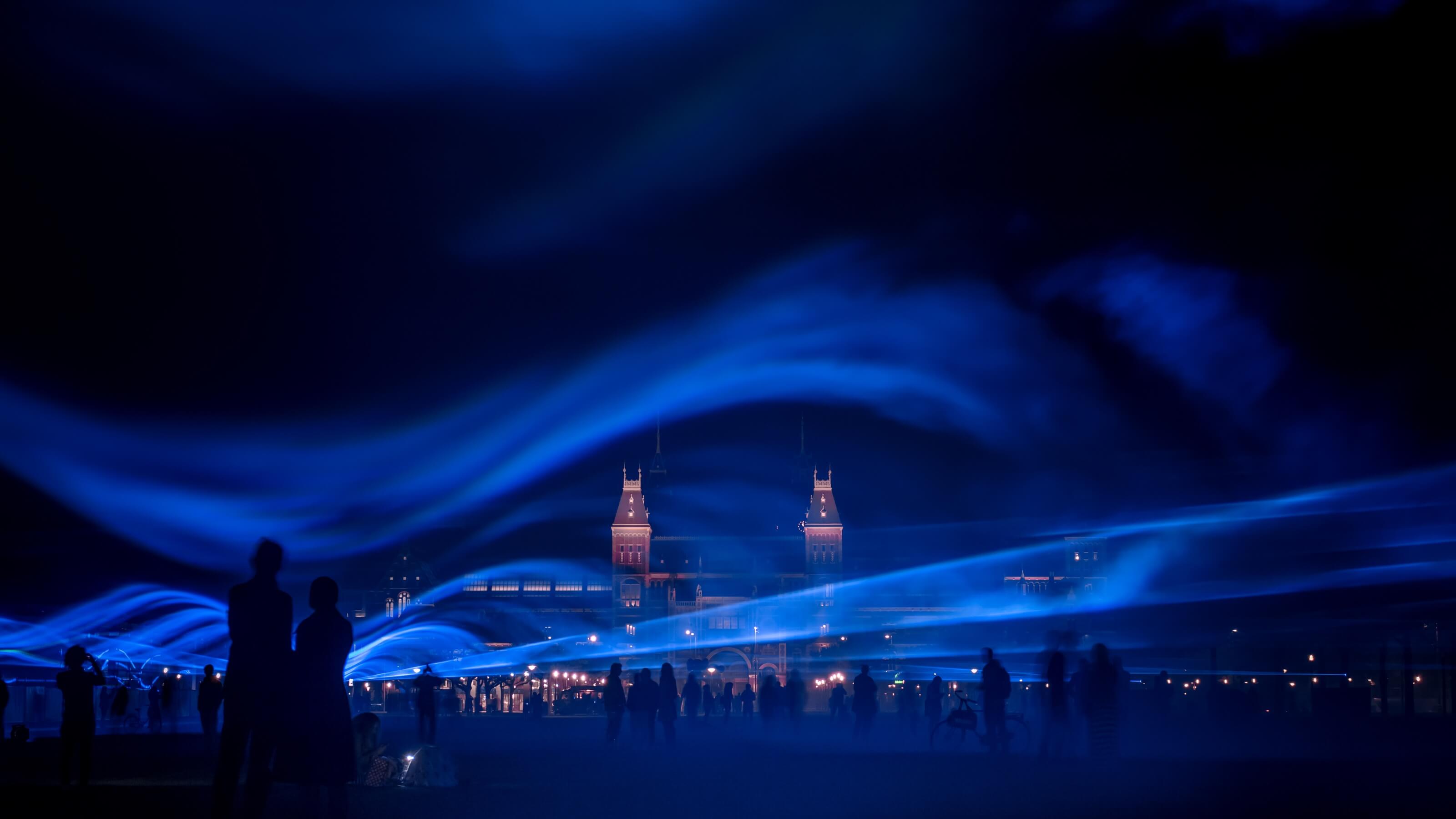 A “virtual flood,” Waterlicht is a light installation that shows how high rising water levels could reach.

Do you have any crazy ideas for redesigning the Davos gathering of the World Economic Forum?

I would propose a competing summit, the Focus conference. In my fantasy, we would gather the best minds and most important world leaders, even incapacitate them if we had to, the way The A-Team drugs Mr. T when they need to fly to a mission. We’d settle them all on a remote island and no one’s allowed to leave until they come up with a major contribution to solving a problem, like cancer or climate change.

Daan Roosegaarde’s “Presence” Beautifully Connects Thought and Action
Best known for his outdoor projects, such as Smog Free Vacuum and Waterlicht, the Dutch artist and inventor animates the much more intimate setting of the Groninger Museum.
Read More 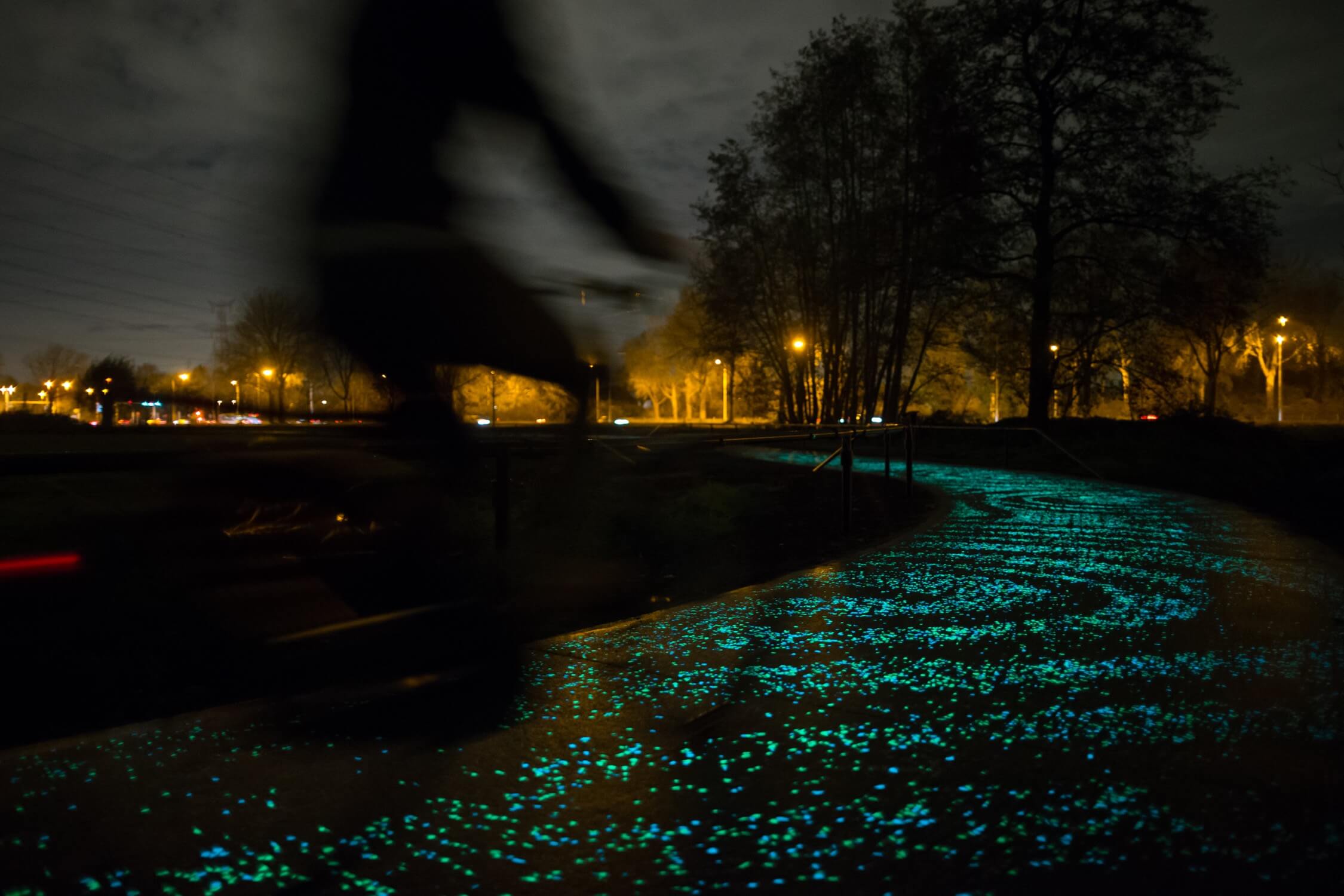 This is a take on the horror of Davos I feel sometimes, the suspicion that nothing really results from all the words, handshakes and presentations. In fact, to take a more protopian approach here, I would be happy if they just invited more architects, designers and urbanists to Davos; it’s crazy that they don’t. But in the end, it’s up to all of us to contribute to solving the world’s problems, to begin thinking of ourselves not as passengers but as crew on spaceship earth.