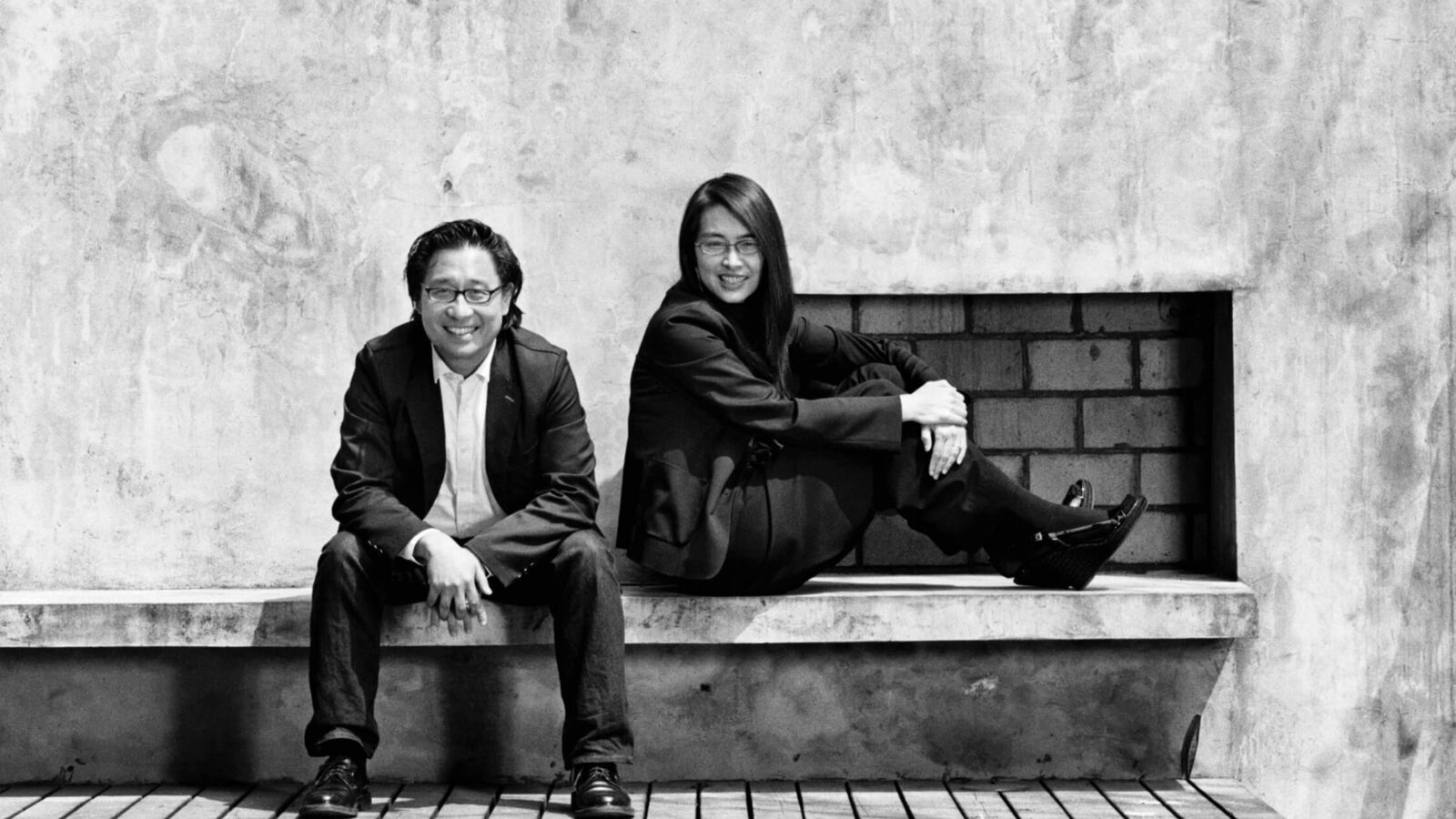 Neri&Hu Bridge Past, Present and Future

At the beginning of this century, husband and wife design team Lyndon Neri and Rossana Hu had cushy jobs in the office of American architect Michael Graves. By the middle of the 2000s, the couple had decamped to China, where they founded Neri&Hu Design and Research Office, their Shanghai-based practice. Although Shanghai has a rich architectural history — it’s home to masterpieces from the Qing Dynasty to the Deco era and everything in between — the city, at the time, was hardly a global design hub.

But Neri and Hu have presided over a kind of Shanghai renaissance. Their work across architecture, interiors and furniture design is bracingly original but never iconoclastic. In their practice, creativity coexists with a strong sense of tradition. Few architects pull off this balancing act quite so well. In January, on the 16th anniversary of the founding of their firm, the two spoke to Azure about the surprising direction their careers have taken since they made their move to China. 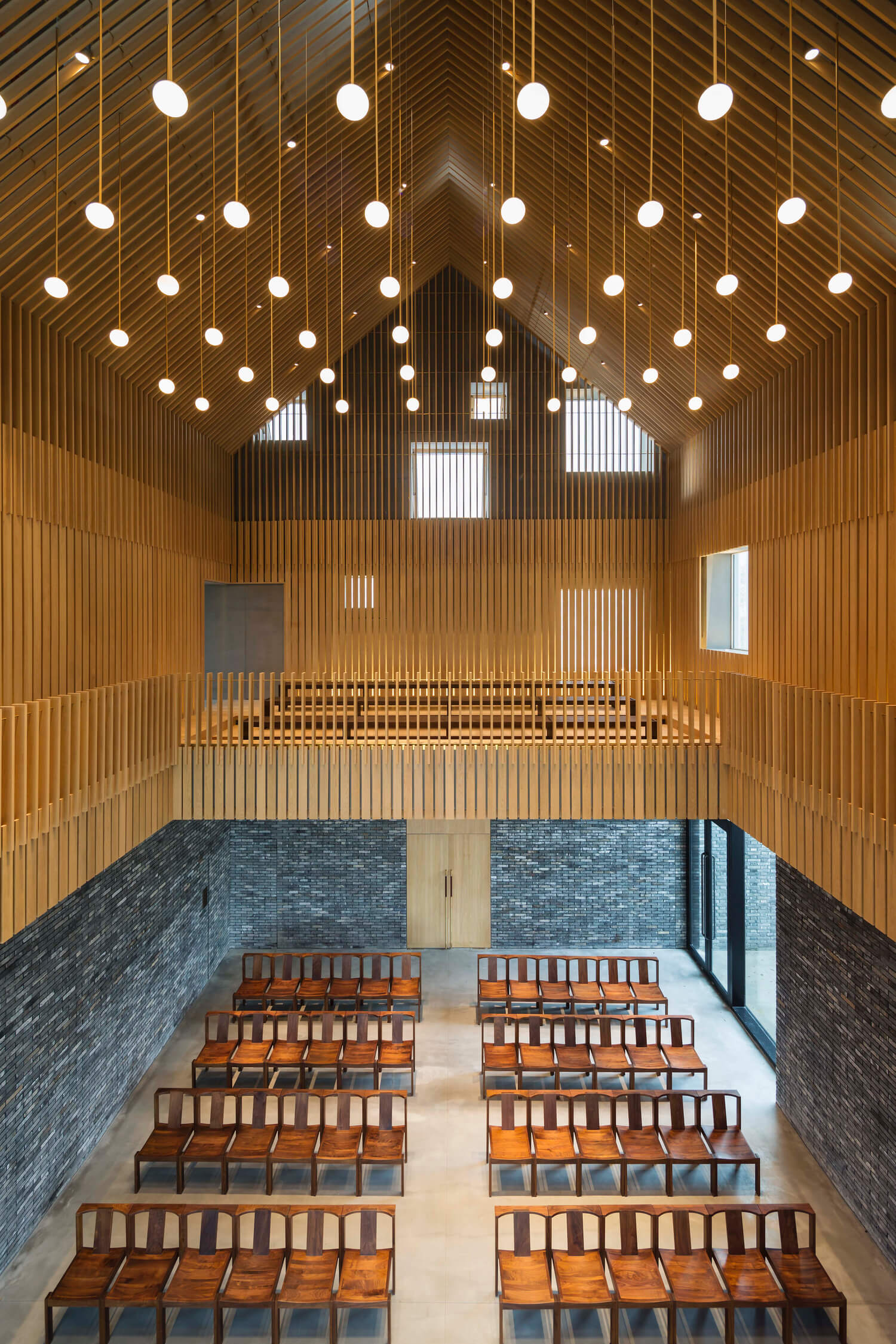 On your website, you have an aphorism by French author and illustrator Antoine de Saint-Exupéry: “We don’t ask to be eternal beings. We only ask that things do not lose all their meaning.” What does that quotation mean to you?

When we started our practice in Shanghai, things around us were chaotic. Money was pouring in, and everyone was building as quickly as possible. It didn’t matter whether the quality was there. The idea was, “Let’s just do it. And if it’s not right, we’ll redo it.” We realized that, in this fast-paced environment, it was important to have a strong sense of who we were and what we were about. That quotation from Saint-Exupéry really resonated.

I see it as a statement about evolution and continuity, about accepting some degree of change but also refusing a kind of radical break with the past.

Yes, but it’s also about depth as opposed to surfaces. In China at that time, people were concerned with how buildings and indeed all aspects of culture looked on the outside. Saint-Exupéry’s quotation is a reminder that there needs to be conceptual depth to each of our designs. We have to own up to the forms we create. 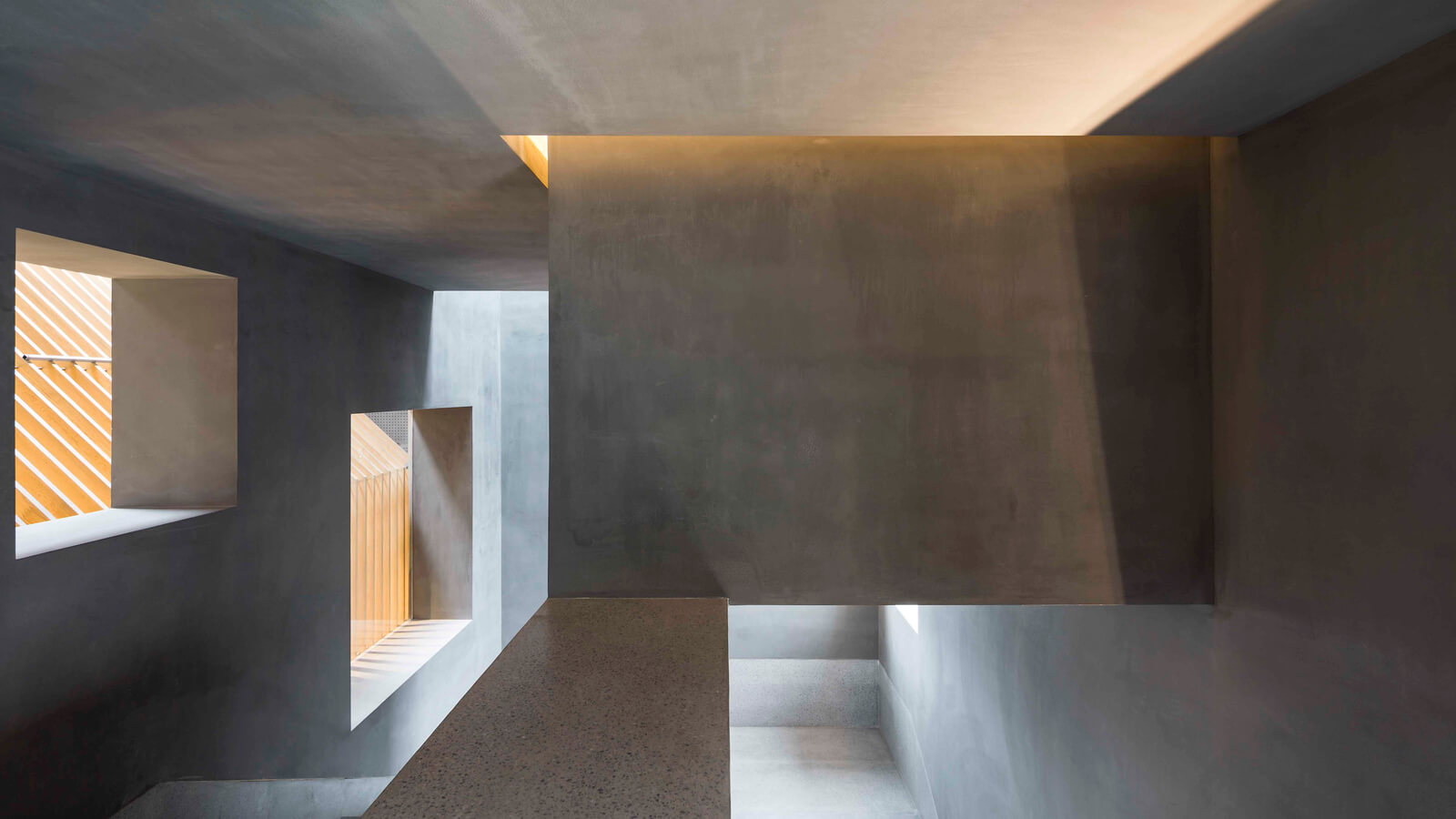 The Suzhou Chapel is also elevated by a rich material palette that includes terrazzo and concrete.

You’re a big name in architecture. Many people would love to be associated with that name and would surely pay you handsomely to design a quick, thoughtless, superficially glitzy building. How do you resist that temptation?

We have to be selective. It requires discipline. Rossana created this amazing questionnaire that we give to our prospective clients.

We ask simple questions like, “Why did you come to us? Why do you feel like we’re a good fit?” If somebody says, “Because you’re in all the magazines and that would help with our PR after we open,” they clearly don’t care about design.

You’ve managed to stay relatively small, despite your international reputation. Would you describe Neri&Hu as a boutique practice?

It still feels like a mom-and-pop shop. Rossana and I can be control freaks. If we’re not happy about a set of images that’s being sent out, we reshoot them. I still obsess over bathroom tiles in our buildings, and I go crazy when people install the wrong toilets.

That sense of stubbornness has gotten you into trouble. The Waterhouse at South Bund is perhaps your first masterpiece, but it didn’t go over well in Shanghai. You were commissioned to build a boutique hotel inside an old Japanese Army barracks from the 1930s, and you made the controversial decision to leave the original shell of the building — with its cracked, water-stained plaster — largely untouched. Why did you do that?

In many places around the world at that time, historical preservation was understood in a limited way. You often had to replicate the original building to a T. Rossana and I had read Svetlana Boym’s writing on “reflective nostalgia.” We decided that, instead of restoring the barracks brick by brick, we should try to understand the essence or spirit of the building. 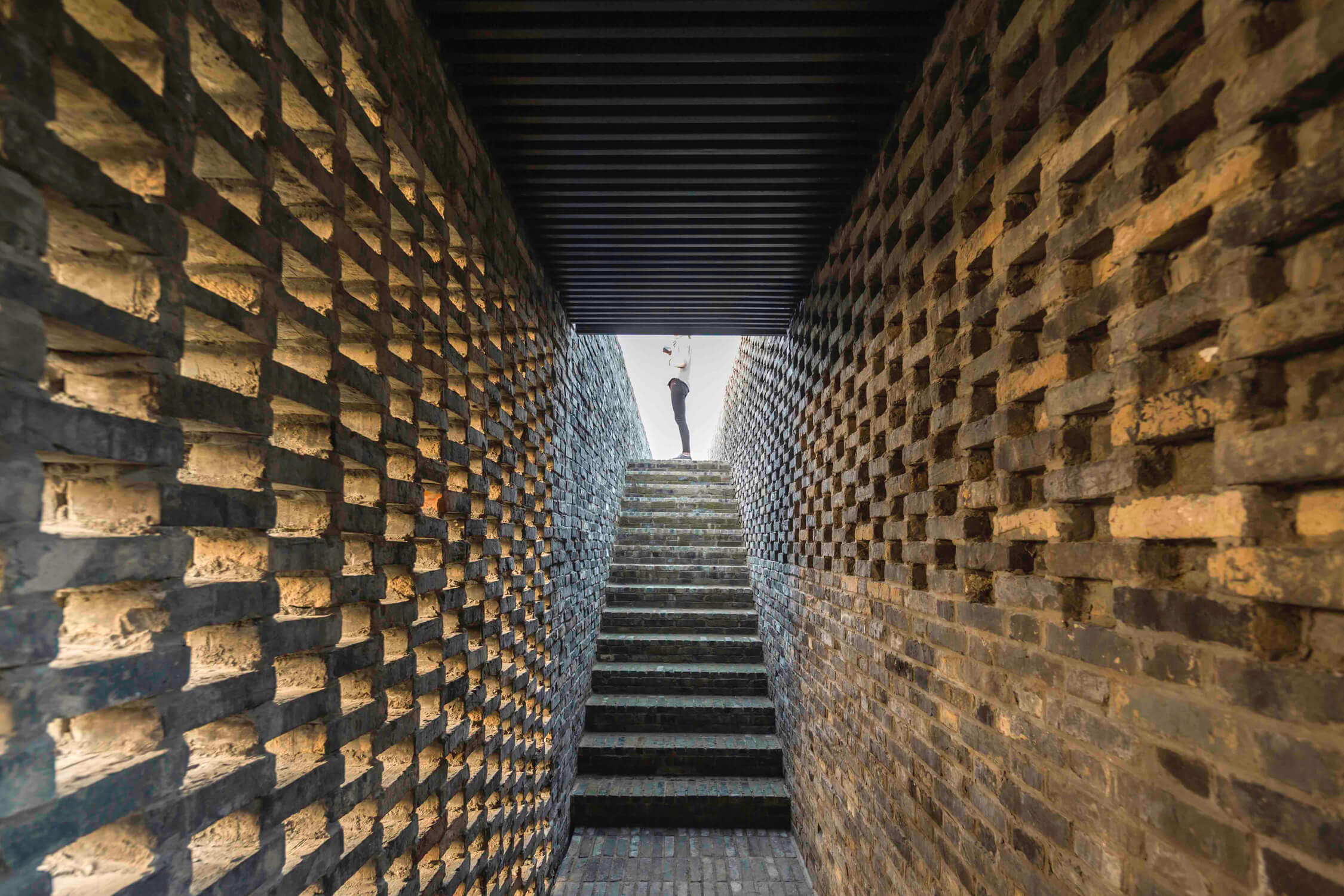 Inspired by traditional courtyards and gardens, the couple studded the 20-room Tsingpu Yangzhou Retreat with a network of reclaimed-brick walls and paths, creating graphic brickwork tapestries and framed views of sky and earth in the process.

It seems that you were resisting the notion that a building is at its best when it’s new. You were saying that, even in its decayed state, the barracks has historical or architectural value.

Exactly. There are parts of it where you see layers of history. Like, you’ll see a layer of paint, then behind it is plaster and, behind that, crumbling tiles. It was very strange for a lot of people. They were like, “Is this a hotel? You didn’t finish the walls.”

We paid a price for that building. Two clients who had already hired us — one for an office and one for a hotel — looked at the Waterhouse and went, “Hmmm, this is not what we hired you for. We don’t think you can continue working on our projects.” Even the local government didn’t appreciate it. Then Hong Kong director Wong Kar-wai had his birthday bash there and the fashion brand Kent & Curwen rented out the entire hotel with [brand ambassador] David Beckham and everything changed. The tourism board of Shanghai put the Waterhouse on the cover of its guide.

Am I right to detect a sort of Shanghai aesthetic that runs through your work?

Our daily walks outside our home are an inspiration to us. In our buildings, we want to recreate spatial qualities — not just motifs and visual patterns, but the actual layering of spaces — to evoke what life is like in Shanghai. 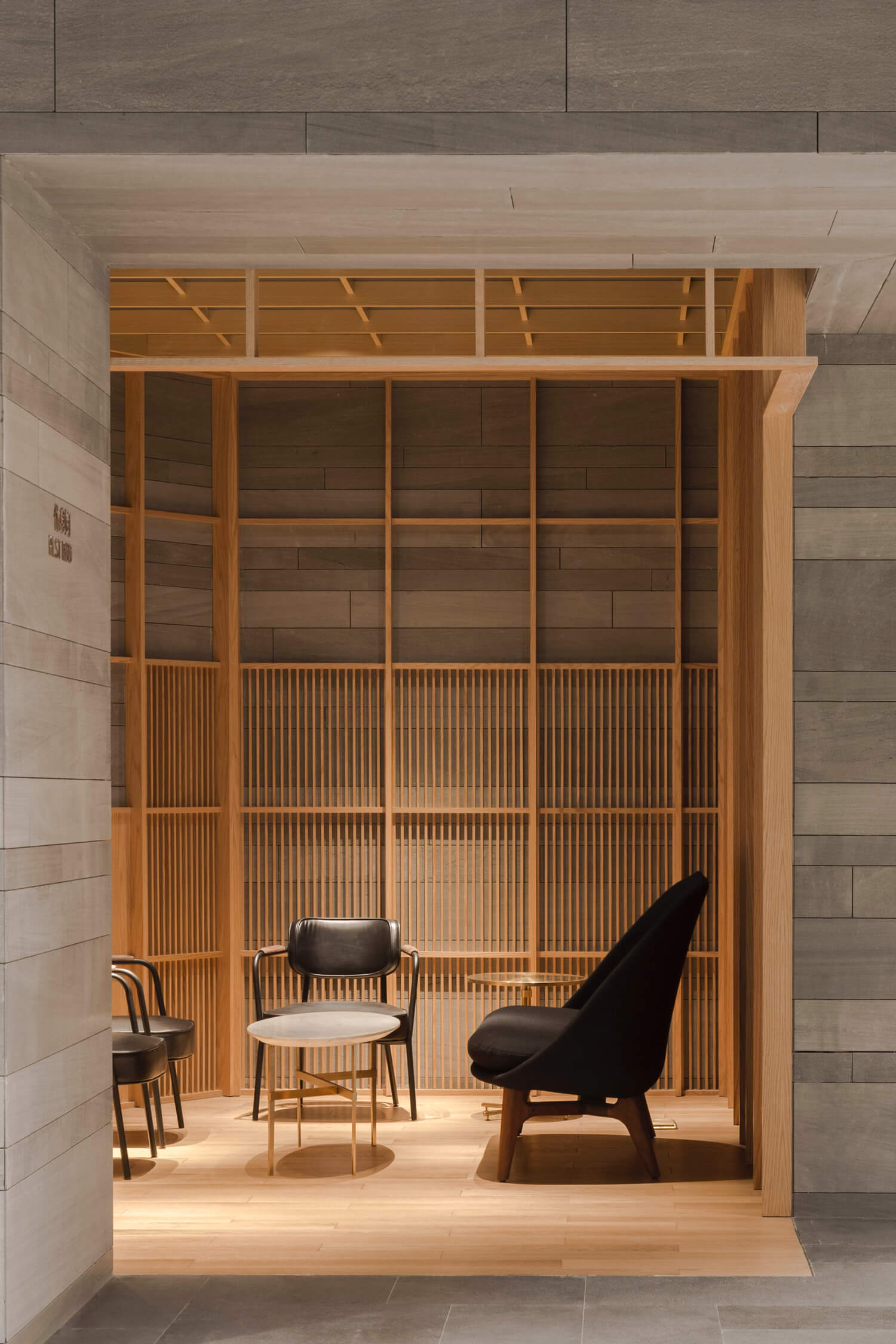 A tallback Solo lounge chair by Neri&Hu for De La Espada anchors a nook at The Hub Performance and Exhibition Center, a Shanghai complex designed by the couple between 2013 and 2015.

In that respect, the typology of the laneway seems particularly important to your work.

The laneway is to Shanghai what the piazza is to Rome. It doesn’t just take you from one point to another. It’s a communal space.

It’s also the connecting point between the urban scale and the architectural scale. It’s interstitial. People go there to do laundry or gossip or play xiangqi [a strategic board game often referred to as “Chinese chess”]. 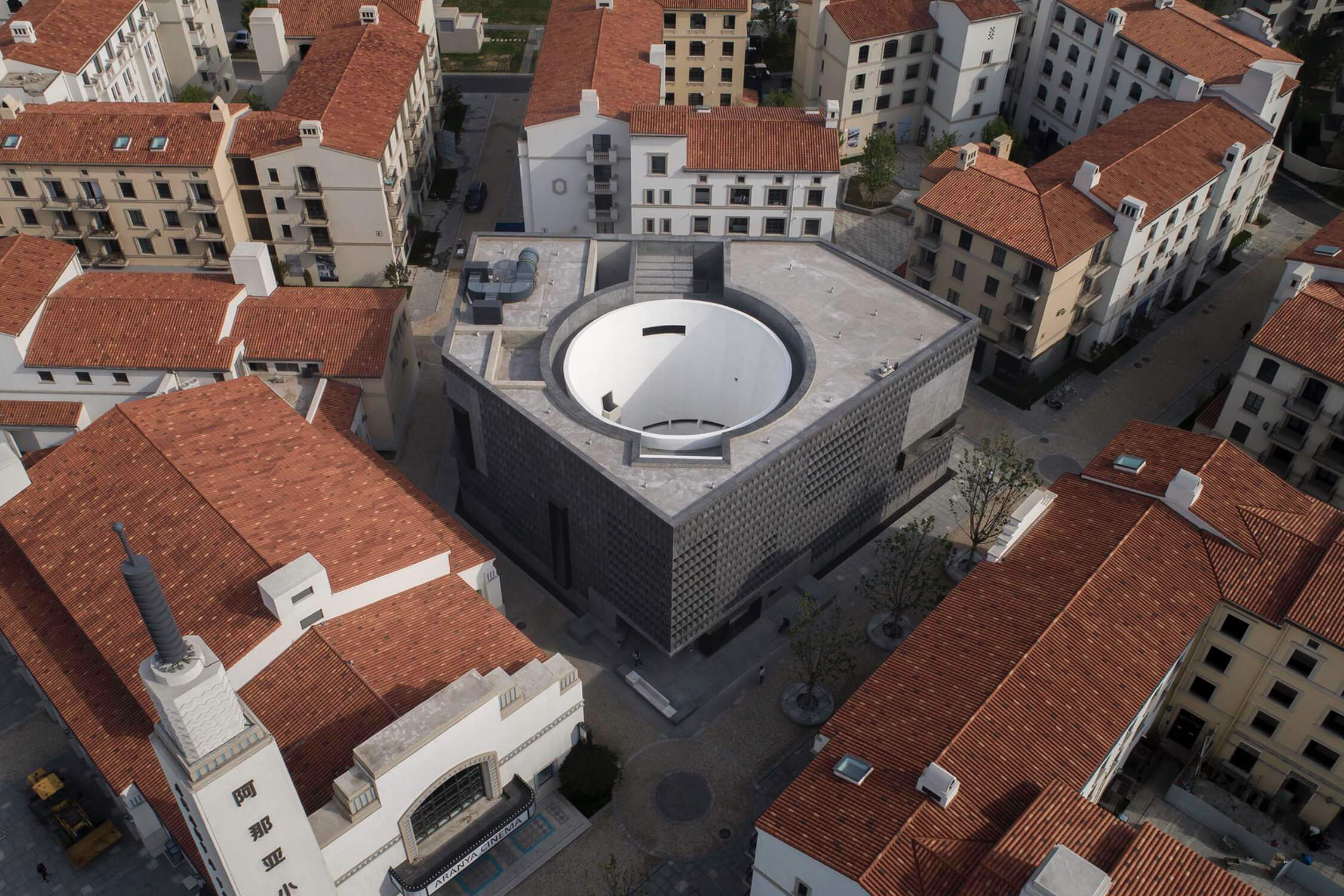 Aranya Art Center was completed last year in the port city of Qinhuangdao; the monolithic, 1,500-squaremetre facility features galleries, a café and an open-air amphitheatre that’s filled with water when not in use, turning it into a pond.

How has your fascination with laneways manifested in your work?

The Aranya Art Center is a block of a building — a solid perimeter that doesn’t have much of a window. In the centre is this circular auditorium which, when not in use, is filled with water. Surrounding it is a long ramp  that widens as it approaches the rooftop. As you walk up, it opens, sometimes to the right or the left or vertically. So it’s this in-between space that’s constantly in dialogue with the space above, below and beside it.

I get what you’re saying. The ramp is like a conceptual laneway, in the sense that it mediates between an interior architecture and an exterior urban environment.

Yes. Similarly, with the Suzhou Chapel, we made a ramp that climbs from the entrance to the actual chapel, with viewing stations along the way. Interestingly, many people who visit the site choose to spend most of their time in that interstitial space. 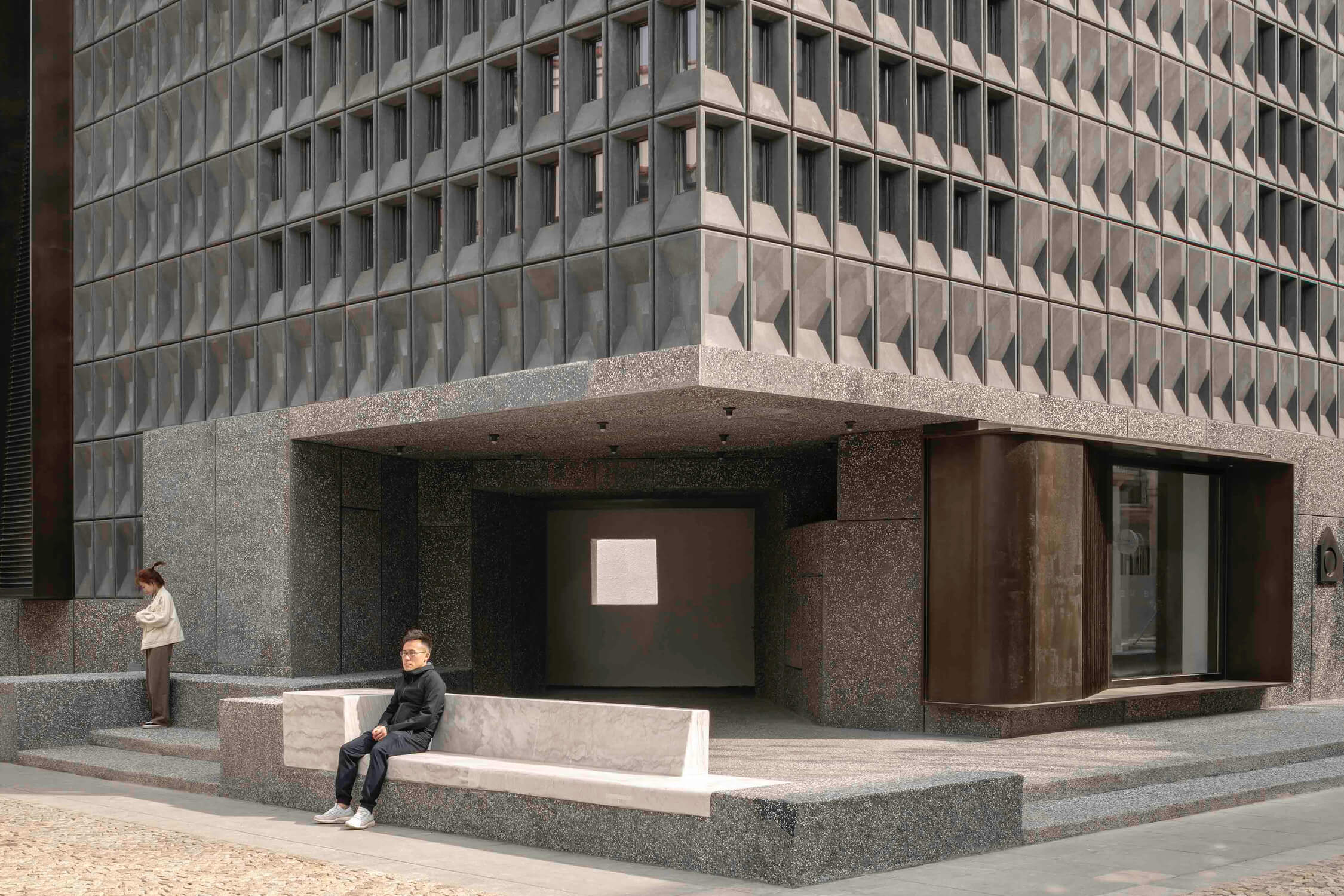 They get proximity to the architecture without having to conduct themselves with solemnity, since they’re not in the actual chapel?

Exactly. There’s some truth to the fact that people are intimidated when they’re in a formal or sacred space.

I’d like to talk about another regional typology: the walled garden, which you reference in your Tsingpu Yangzhou Retreat with a series of adjacent courtyards demarcated by patterned brick walls.

With that project, we were thinking about the Yangzhou garden typology. In these sites — typically a mansion owned by a rich scholar — the garden is 10 times bigger than the house. The garden is supposed to be a microcosm of the scholar’s world view. The scholarly activities of poetry-making and painting and musical composition happen there. We thought it was interesting for people to gain a contemporary interpretation of this historical building type. 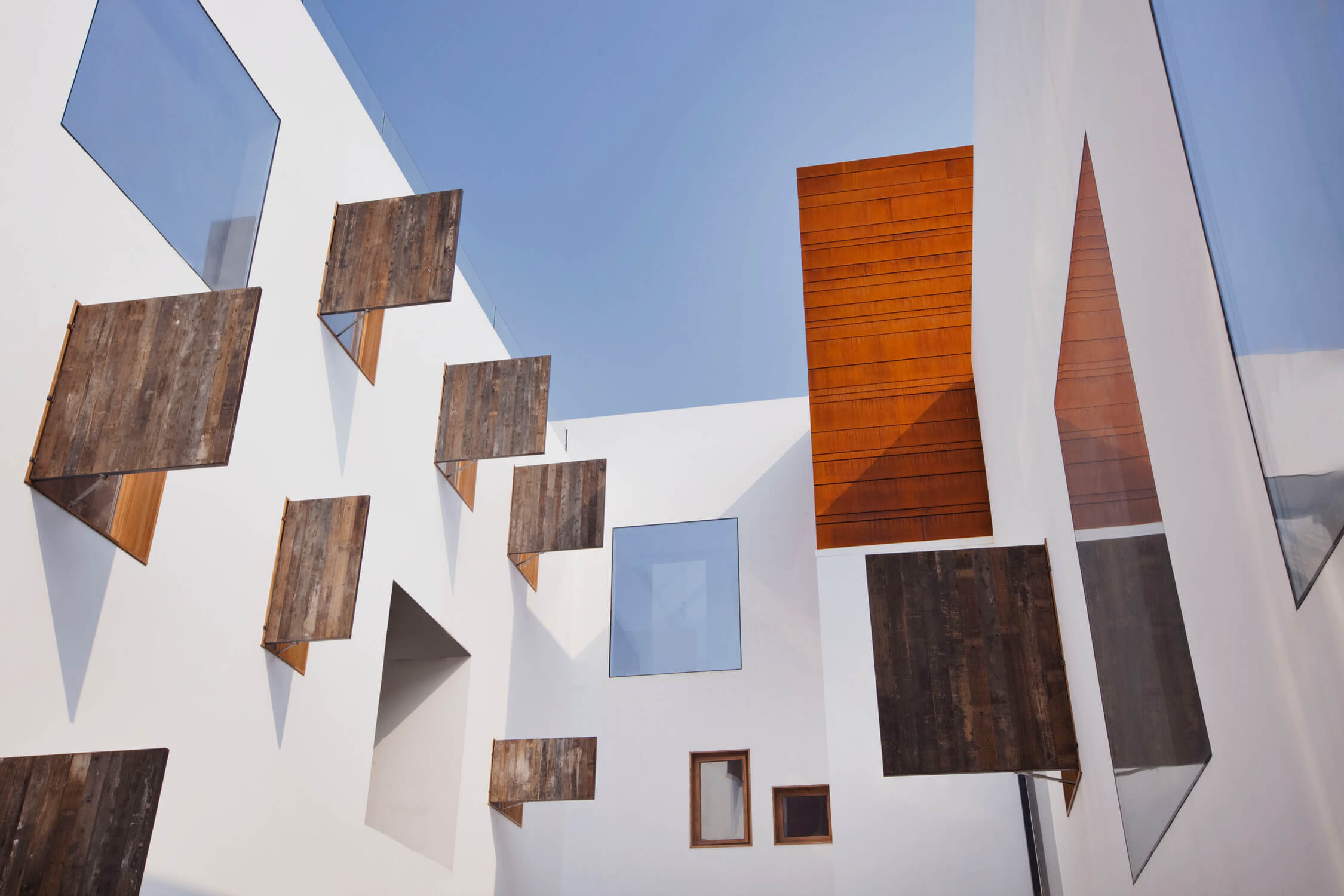 Now recognized as a masterpiece, the Waterhouse at South Bund, a four-storey boutique hotel built into a former Japanese Army building, was under appreciated by many in Shanghai when it was unveiled in 2010. Perceptions changed when global celebrities began hanging out there.

Speaking of contemporary riffs on classic themes, can you talk about your flagship store for the Asian skincare brand Sulwhasoo? That building appears luminous, thanks to a shiny brass latticework that runs throughout much of the interiors. I believe it’s supposed to evoke a lantern?

For the client, we had to find a powerful analogy. And the lantern came to mind — a guiding light in search of beauty. So that was the analogy, but our main interest as architects was to play with the figure and the ground.

What do you mean?

At different parts of the building, you perceive the latticework differently. When you’re on the rooftops of nearby buildings in Seoul, especially at night, the latticework glows and seems to merge with the structure. But when you’re inside the interior, you walk through the latticework as if it’s in the background. It feels almost like negative space.

You’re very interested in this kind of interior detailing. A building, for you, is never just a schematic shell. You even have a furniture- and interior-design practice. Why do you insist on doing all of these things?

In China, it’s important to control the quality of the projects you do. When we started, we could find virtually no graphic designers or interior designers to work with. People would ask us to do these things and we’d say, “Are you kidding? Can you hire someone else?” Then they would get someone and we’d be like, “Oh, okay. Maybe we should just do it.” 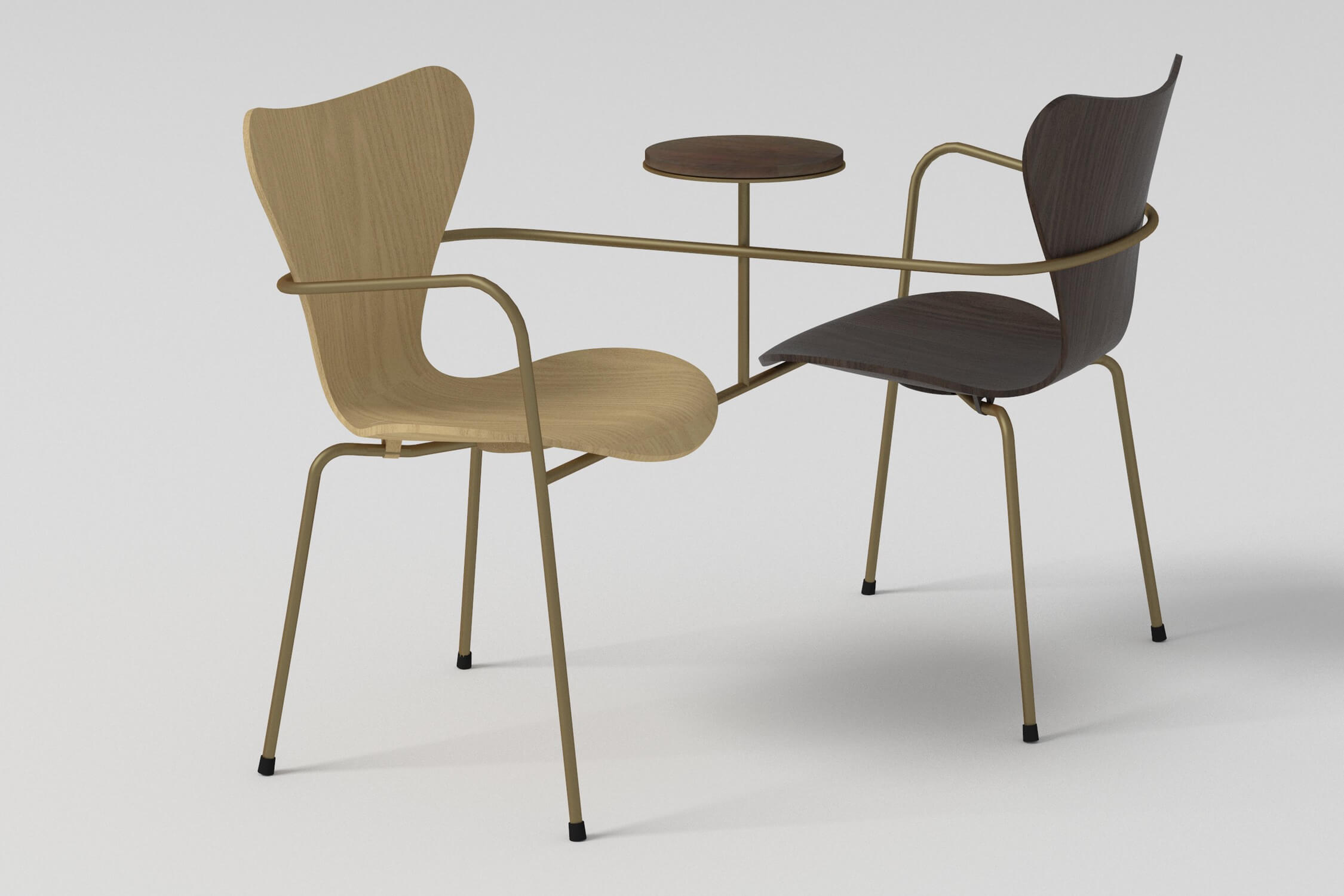 Skilled product designers as well as architects, the duo reimagined Arne Jacobsen’s classic Series 7 chair in 2015, recasting it as seating for two.

I feel like I can’t end this interview without asking about at least one furniture project. In 2015, the company Fritz Hansen invited you and other designers to reimagine Arne Jacobsen’s classic Series 7 chair. How do you even begin to improve upon something so iconic?

We decided that, as in the story of Adam and Eve, this chair needed a partner — one it could converse with. Ours was one of the simplest designs of the bunch. We just added one more piece.

Having multiplied the existing design by two, you remained true to the original form of the piece and you respected historical precedent. That seems congruent with your overall approach to design.

A lot of the other architects deconstructed Arne Jacobsen’s piece. We thought it was just so good as it was.