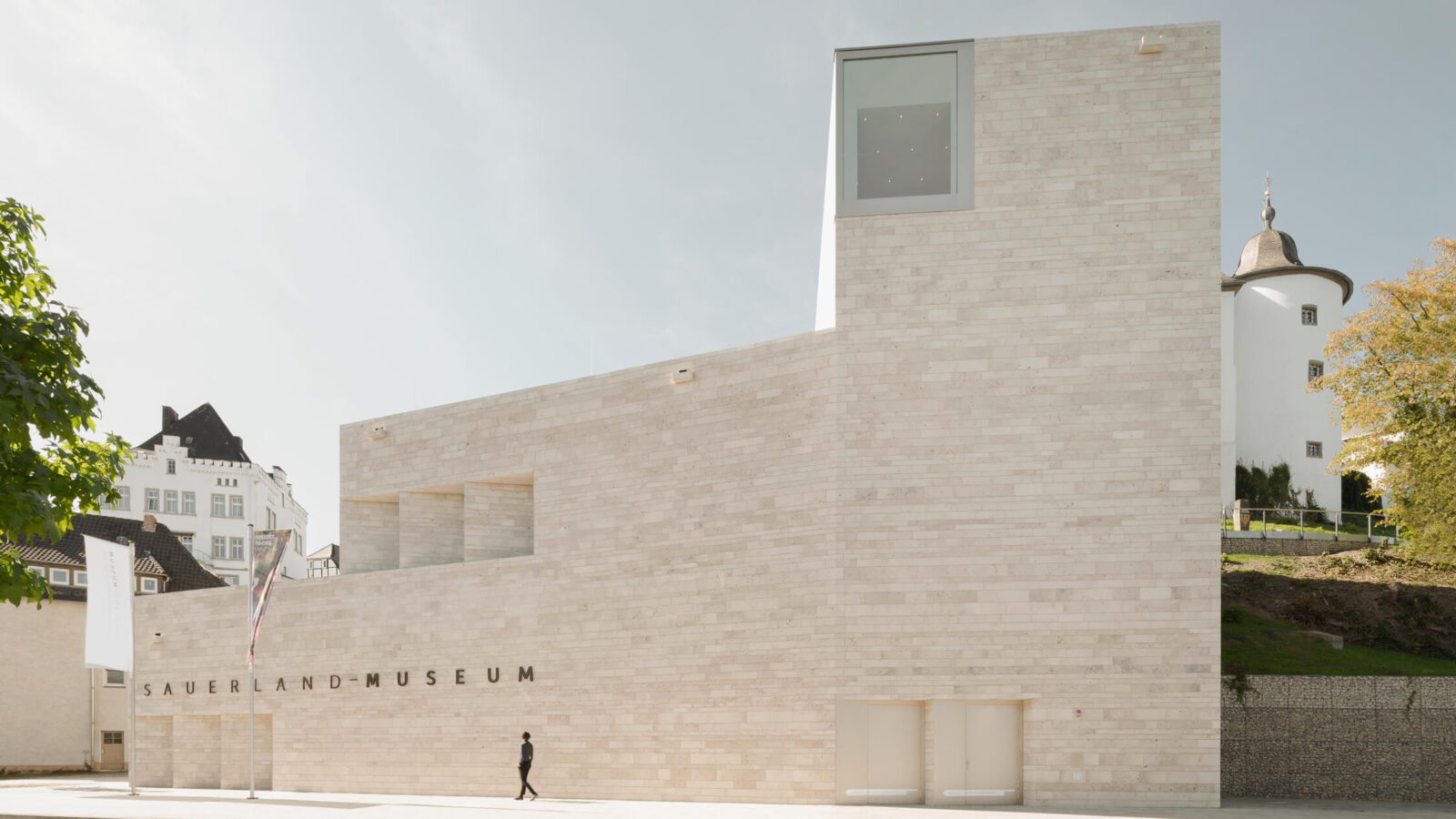 In Germany, the Sauerland-Museum Transforms Context into Subject

Over the centuries, the pastoral Sauerland Region in northwest Germany has witnessed the rise and fall of Emperors, the ebbs and flows of industry and much more. A record of this past is preserved at the Sauerland-Museum of local history, housed in the Landsberger Hof, a 17th-century neoclassical palace in Arnsberg. Originally built for Gertrud von Plettenberg, the mistress of Ernest of Bavaria, the palace functioned well as a piece of living history, but lacked the technical capacity to host more complex shows.

In 2012, Stuttgart-based Bez + Kock Architekten was tasked with designing an extension to the historic museum to support its expanding exhibition program. The resulting 1,247-square-metre addition straddles the border of old and new in the most literal of senses. 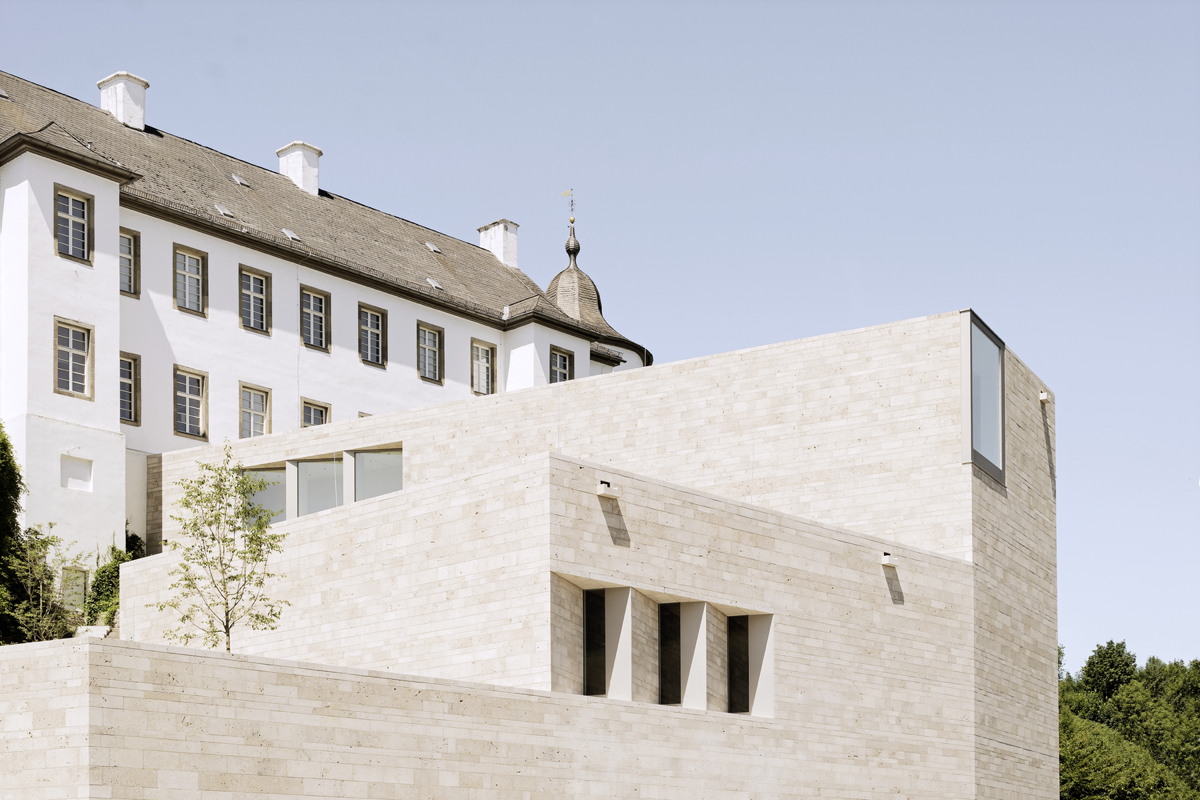 Composed of a stepped, three-tiered volume clad in sand-coloured Gauinger travertine from the Swabian Alps, it sits partially tucked into the base of a small hill with the palace peering over just above. “Both buildings are to be perceived as independent architectural works from their respective epochs,” Martin Bez, founding partner of Bez + Kock, says of the structures linked via an elevated bridge that clears the ancient city walls. “[They’re] two different houses that mutually respect and strengthen each other.”

In addition to connecting the historic and contemporary structures, the elevated bridge directs guests to a full-height window with views into the city. A pristine stairway then leads down to the main exhibition halls featuring integrated lighting and dramatic concrete beams.

Though the client’s initial brief dictated that the addition was to flow sequentially from the old palace, this request proved challenging due to the steep hill separating the plots. During the competition phase, the architects proposed completely burying the new structure, but later abandoned the concept as “the difficult topography and specific geology would have consumed about half the total budget,” says Bez. Accommodating this constraint, the studio’s solution seemingly tumbles down the incline to empty out onto the street below, maintaining sightlines towards the original building while providing space for special exhibitions. 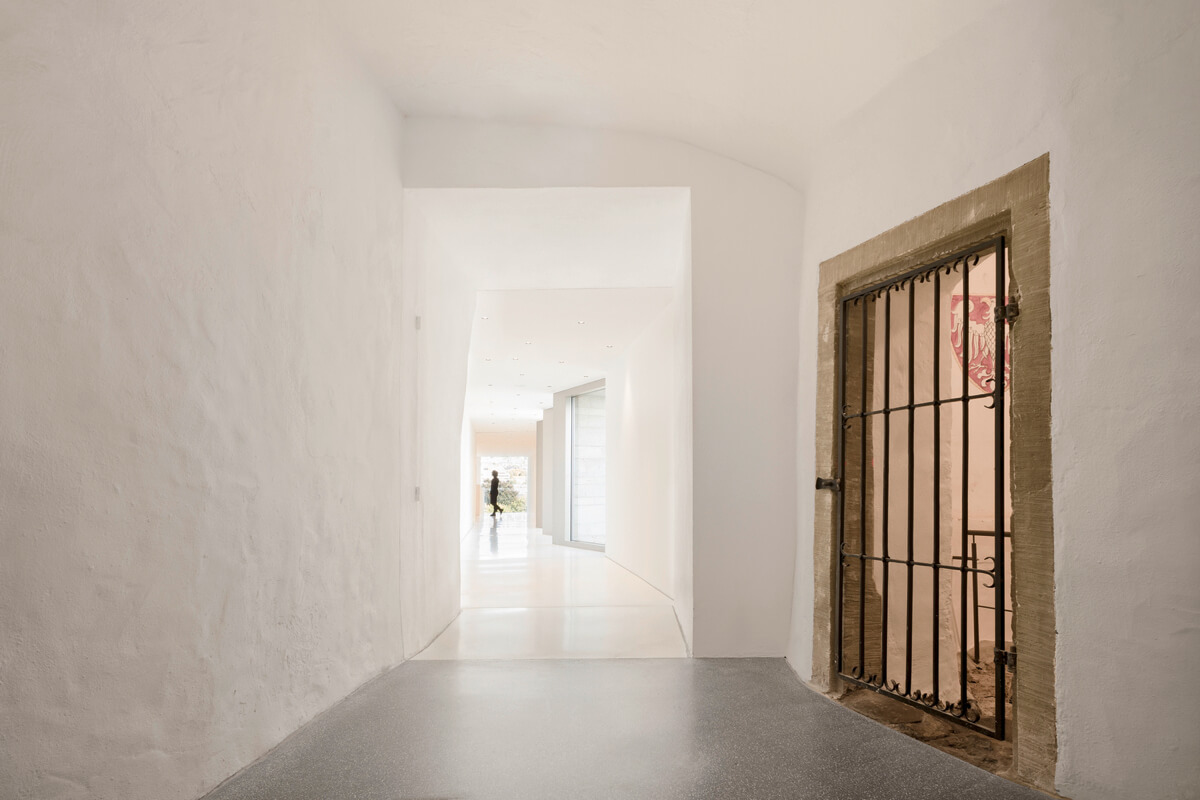 Museumgoers now pass directly through the epochs of Sauerland’s history on their journey through the institution. “Coming from the old town,” Bez explains, “the visitor first descends into the dark cellar vault of the existing building. A narrow gap in the base of the building forms the threshold to the bridge, which runs straight to a floor-to-ceiling panoramic window.” From here, 15 metres above street level, guests proceed down a series of crisp-white stairways to the exhibition rooms below. 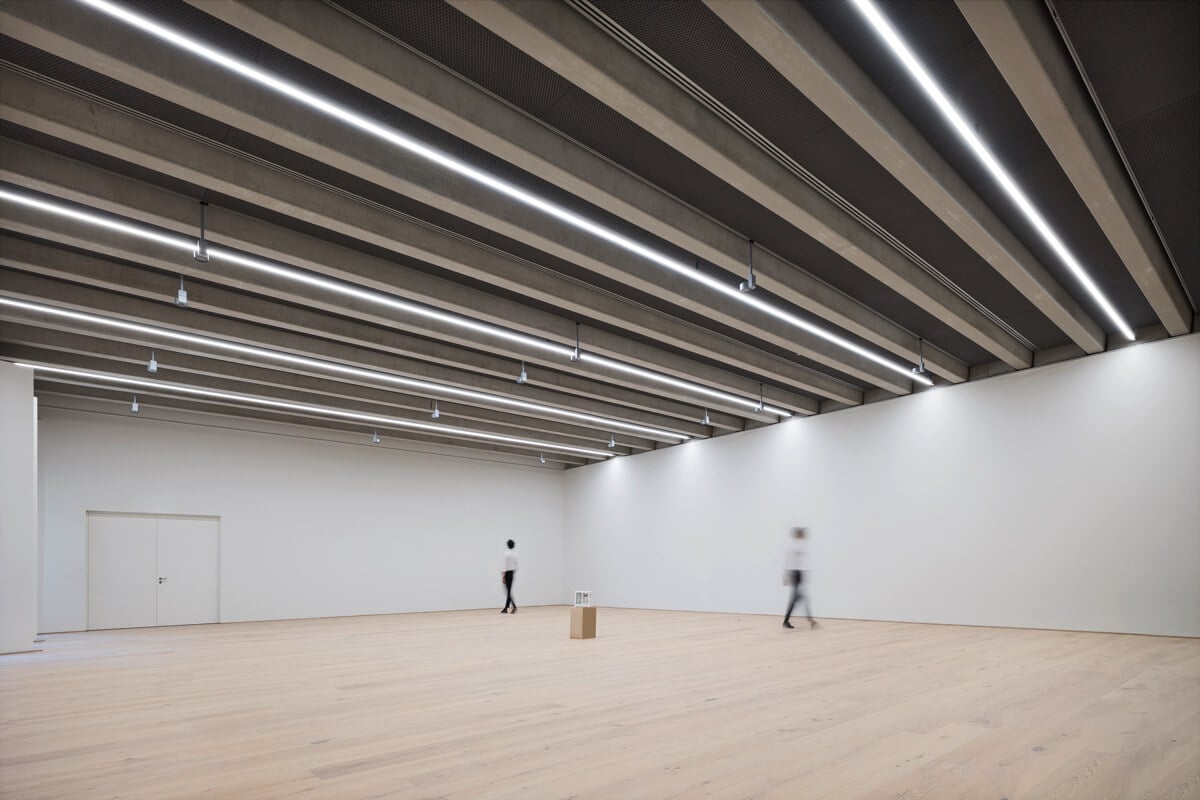 Inside, the oak-floored spaces are devised as column-free halls (allowing the museum staff to partition the galleries as needed) with LED ribbons embedded between precast concrete beams and adjustable spotlights for illumination. Windows pierce the facade at oblique angles in both spaces, turned to take advantage of the structure’s thickness so no frontal view is possible. “The visitor must go directly to the window to perceive the view,” Bez notes. With these generous panoramas — overlooking the bustling Brückenplatz town square, the snaking Ruhr River and the unfolding landscape beyond — Sauerland is a living subject on both sides of the glass.