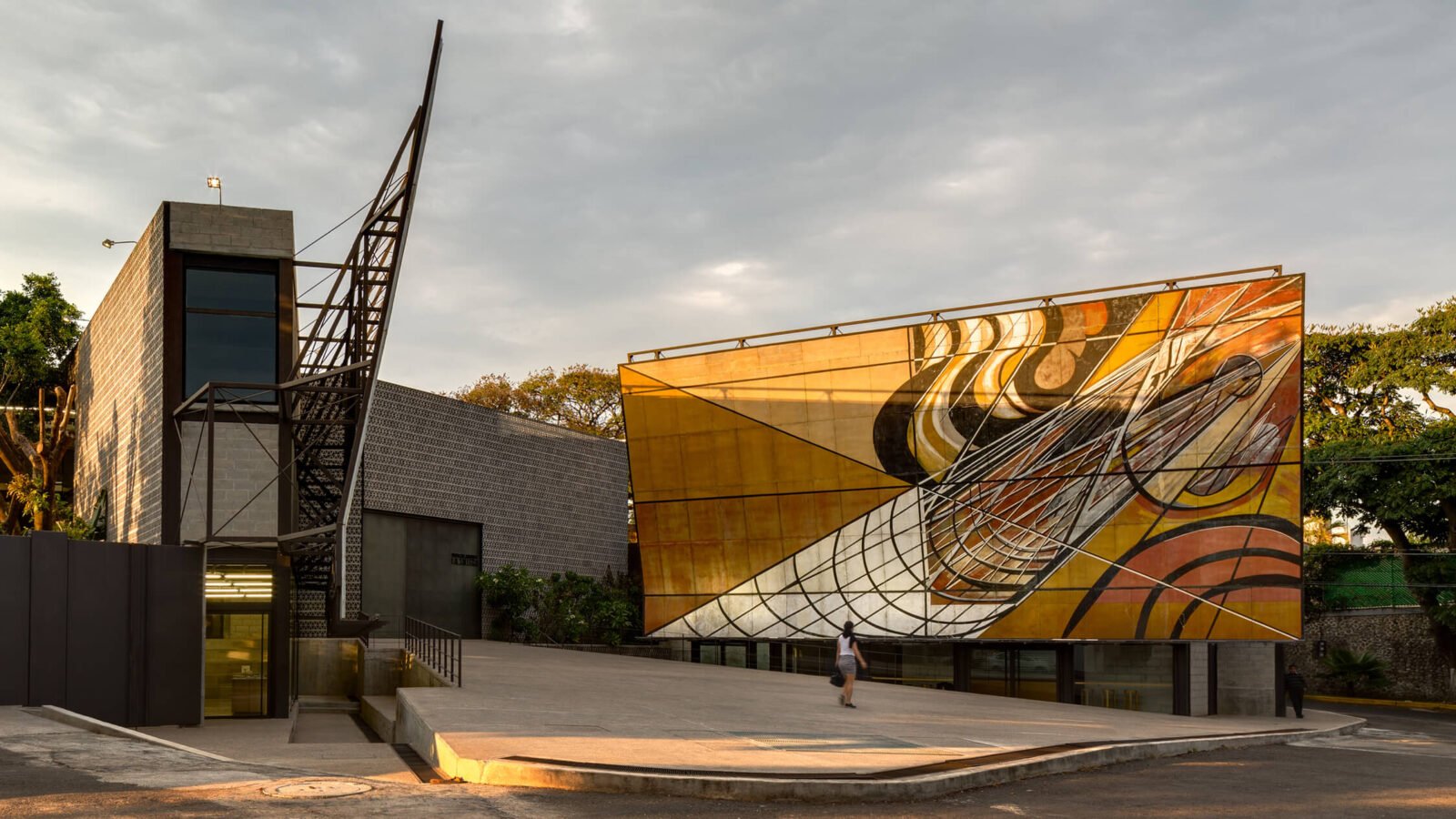 Architecture isn’t just bricks and mortar for this architect, it’s about who’s between the walls — visible and invisible — as well.

“Architecture is like a true imprint of social dynamics,” explains Mexico City-based Frida Escobedo. “You can read it. You can see the things that are manifested in space and you can feel the interactions that happen within it.” Since establishing her eponymous studio in 2006, the award-winning architect has completed a wide range of projects — from experimental installations and exhibit design to housing and high-end boutiques — that address the forces embedded in building: social space, time, locality and labour.

It was after encountering a puzzling requirement for two kitchens in a brief for the failed Ordos 100 community in China that she became fascinated by the lengths to which builders go to isolate, conceal and erase domestic labour and those who perform it. “In the project, it actually looked like there was a house within the house,” she explains. “It was like something revolving around the house — like the moon and the Earth — repelling each other but also attracting.” As she recently told Azure, this tension was not only the subject of a recent studio at Harvard’s Graduate School of Design, but a way of examining how shifting ideas of gender, family structure and inclusion can inform architecture of all kinds. 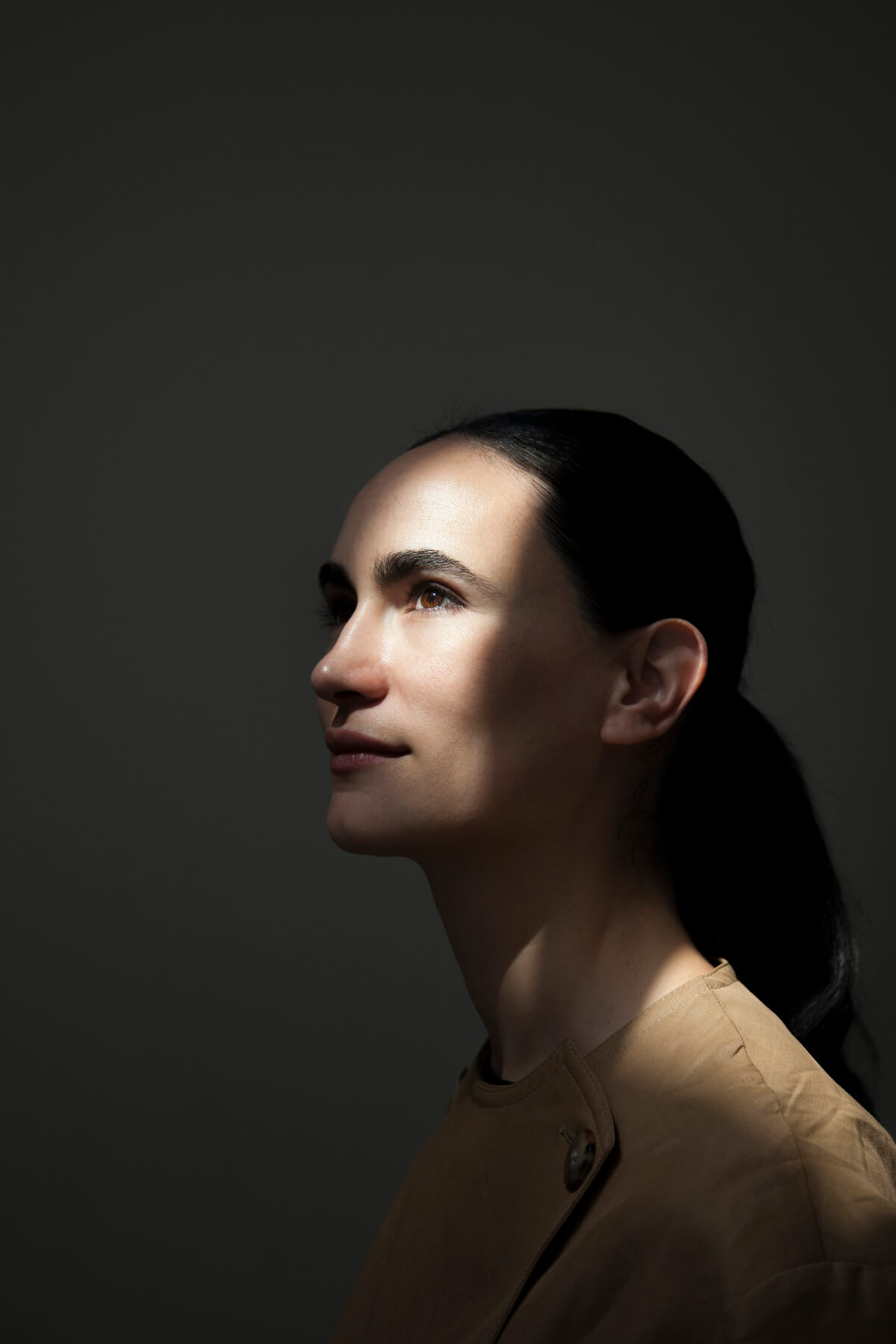 The domestic sphere is a preoccupation of your ongoing research and teaching project Domestic Orbits, also the title of the speculative essay of case studies published in 2019. How does architecture go about masking domestic workers?

In Mexico, this idea of separating and making things invisible or visible is quite apparent: What is socially acceptable and what should be disguised? The same current appears in Casa Luis Barragán. There is a service house within the residence that is still inhabited, but hasn’t been photographed or recorded. We began analyzing all the things that Luis Barragán carefully did to choreograph the movement of domestic labour throughout the house to render it invisible.

It was quite shocking to see all the energy put into disguising something that is crucial to our lives. If you measured it in economic terms, domestic labour represents 25 per cent of the gross income of Mexico. That is huge. Domestic labour was not even recognized as a job until 2020, but this is how we raise our children, how we feed ourselves and how we maintain our lives. A major component of this is not only gender, but also ethnicity. We’re trying to disguise that, replace that, and it’s very revealing about the ways we relate to each other. As an architect, I wonder whom we are leaving behind the wall.

What is the importance of bringing these ideas to the fore?

When I think about architecture, I don’t think of it in terms of building but in terms of space and what happens within it. Once you start seeing this erasure in the domestic realm, you start seeing it everywhere. You start thinking of all these problems of design that haven’t been addressed in terms of gender and inclusion. It seems like, “Oh, you’re only now focusing on women.” No, it’s just that this has been forgotten for so long.

When I think about architecture, I don’t think of it in terms of building but in terms of space and what happens within it. 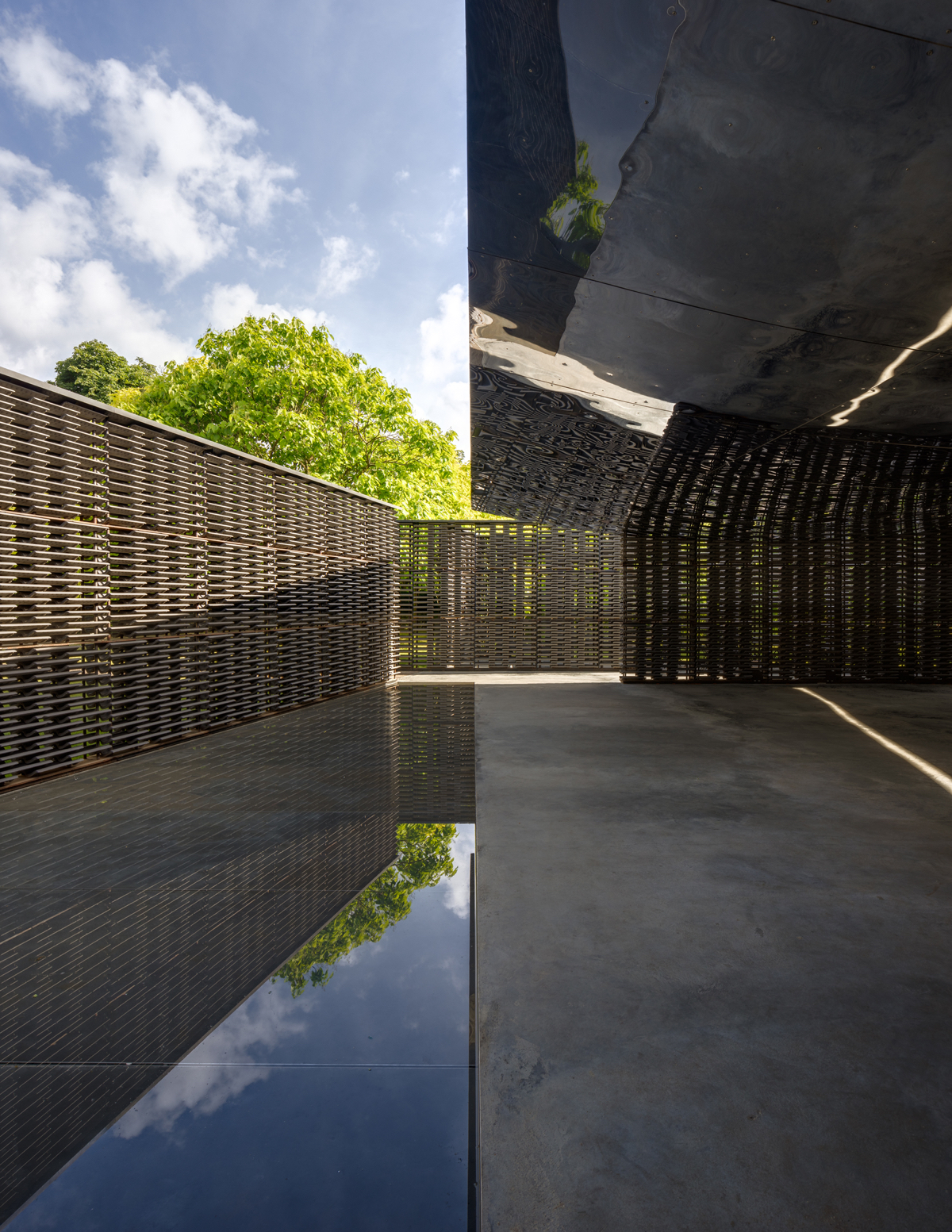 For the 2018 Serpentine Pavilion, concrete roofing tiles were woven together to create a tapestry-like skin, which functioned as a dark breeze-block wall. PHOTO: Rafael Gamo

In 2018, you were only the second woman solely at the helm of her own practice to design the Serpentine Pavilion. As the principal of your own studio, is gender representation important to you?

I don’t know if it’s strange that I was the youngest woman to be invited then. Is it something we should be thinking about? Or is it something that, in a project like the pavilion, is not relevant anymore? I hope it’s not. If we’re able to see that this is not important in the context of the Serpentine Pavilion, then eventually we will be able to see it is not important elsewhere.

At the same time, my practice is collaborative. My role is to be the editor and director, but I don’t think by myself; I have a team of people. Sometimes it’s all women in my studio, sometimes it’s all men and sometimes it’s a mix. Though we live in Mexico, where this separation of who does what is embedded in our DNA, ideas of gender have drastically changed, and this is something that we cannot take for granted anymore. And I’m happy we don’t. We can now address the social roles that are embedded within these concepts. 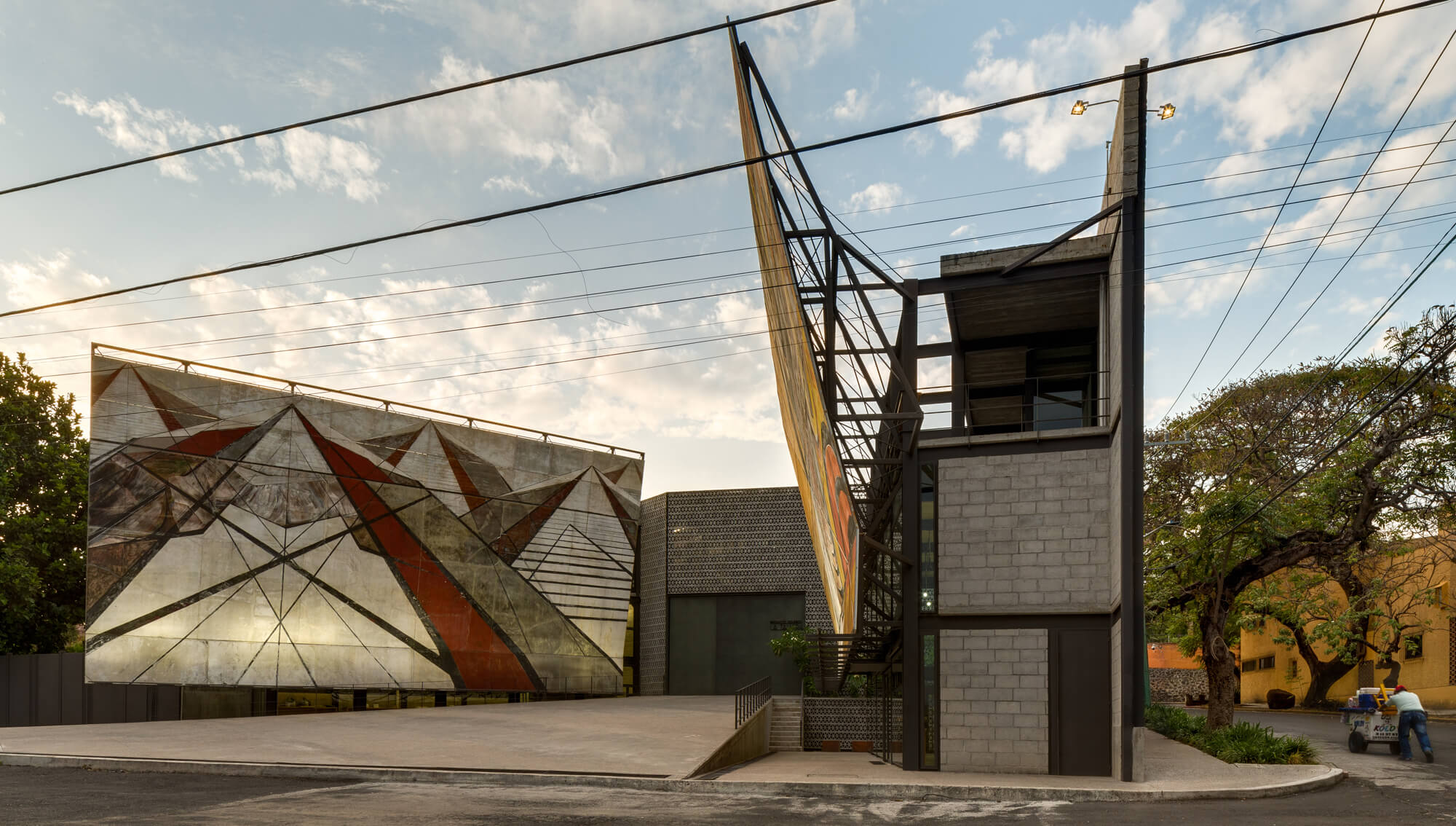 The last decade saw not only the ascension of a number of architecture practices led by women but also an increased focus on social housing, particularly in Mexico. How did you become involved with your country’s National Workers’ Housing Fund Institute, Infonavit?

The latest initiative was started in 2017 by Infonavit’s former deputy director for sustainability, Carlos Zedillo Velasco, with the idea of inviting architecture studios from all over the country to create low-cost housing prototypes in Hidalgo, whether it was achieving more density in abandoned areas or understanding what the structure of the home could be for workers’ residences. It began as this vision that we as architects could do something in terms of not just designing the space, but also thinking about the financial implications for families.

We wanted to create a platform for the family to organize itself in different ways. 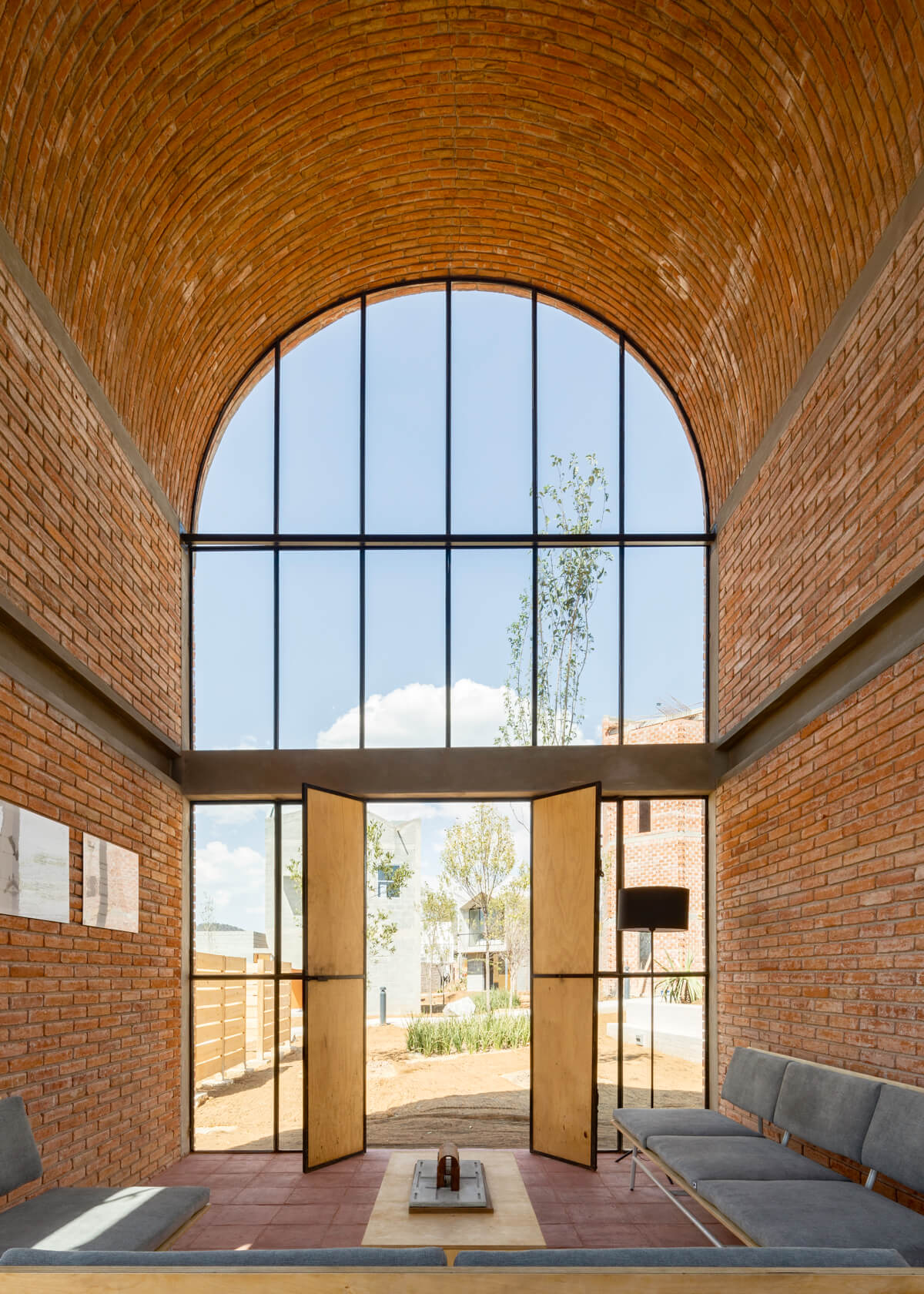 For Vivienda Rural, part of the “From Territory to Inhabitant” study for Mexico’s Infonavit, Frida Escobedo and her office conceived this social housing prototype. The barrel-vaulted brick structure is designed to support incremental growth and shifting familial arrangements. PHOTO: Rafael Gamo

What was the resulting project?

We completed five exercises with Infonavit, and “From Territory to Inhabitant” was one. Because this was regional housing, it was really interesting as an initial experiment. It had to do with being very site-specific and trying to design a prototype that was on rural land, but eventually would connect with Mexico City as its expansion continued. How do you create that transition? And how can you integrate yourself with a growing city, but starting from a rural context? That was the first question. The second question was: How do you build a structure that costs as little as possible? We decided to construct an envelope that was big enough to be divided within. Initially, there would be one single space, but it could be segmented further into three bedrooms as needed.

Instead of expanding, it was an implosion, creating more density. The more you build, the less it would cost for families, as you’re not repeating walls but sharing them. We were interested in challenging the idea of how family structure is understood, because it’s not just a mother, father and two kids. Sometimes there is a grandmother and perhaps a younger uncle, or an extended family coexisting in the same space. Why would you need three or four kitchens if you could just have one? We wanted to create a platform for the family to organize itself in different ways. 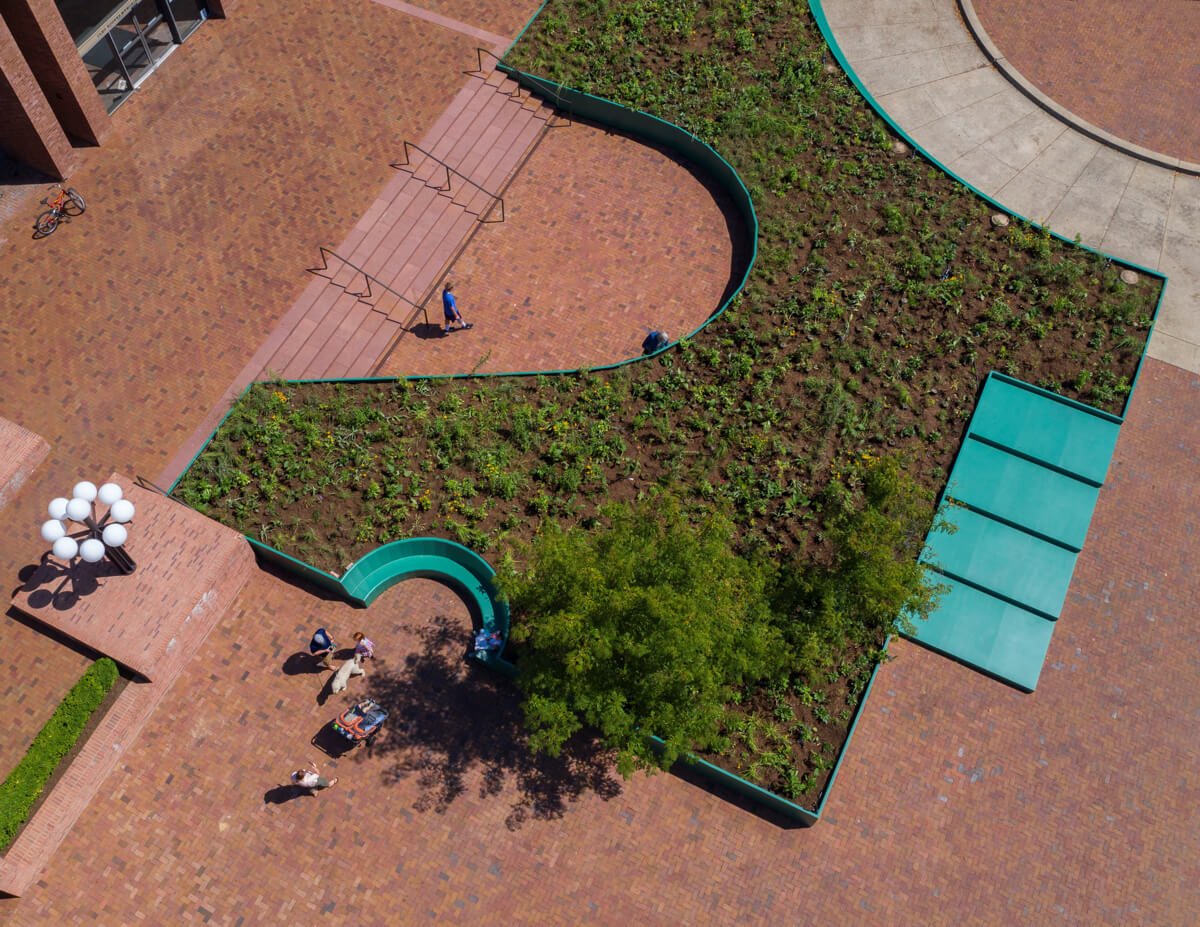 In approaching these projects, what other questions do you ask?

One is the question of family structure. We’re not just looking for the typical ideal or what was understood as ideal, the standard usually being male and from a specific ethnic background. We’re looking at the demographics, such as an aging population that is not going to be able to pay for their retirement or healthcare in the future. How do you create the possibility of income for them?

Another question concerns how to give people tools and how to avoid imposing. As architects, we believe we can tell people how to live, but it’s usually the other way around. We need to understand what their needs are and craft spaces for them to flourish. It’s about the economy of resources, but also about reacting to the family situation. We’re always studying and optimizing, but often we’re optimizing for the developer and not for the family. 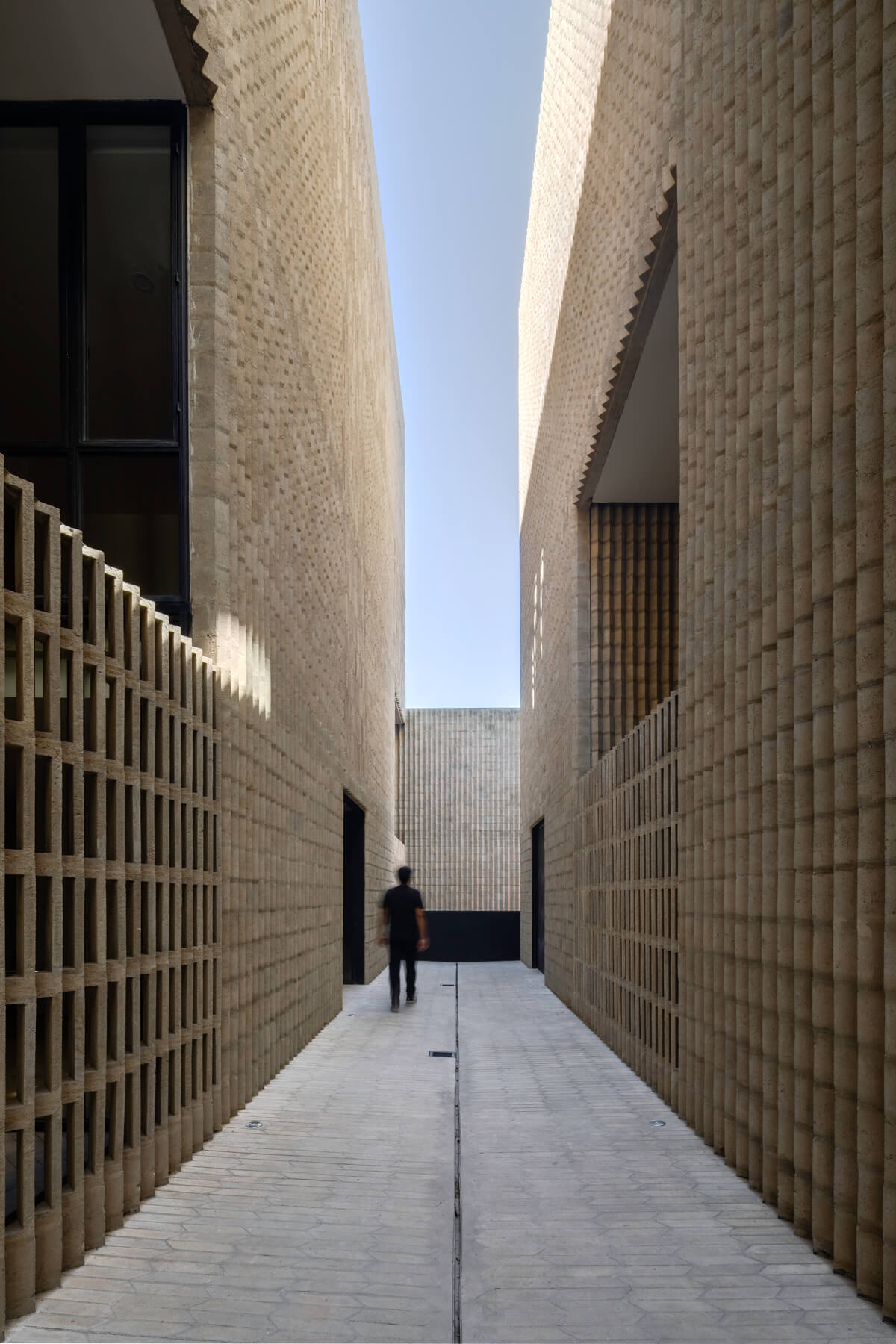 When you’re conceiving larger residential or social housing developments, do the concepts from your experimental installations — such as materiality or engaging public space — inform the work?

There are certain things that are constant, such as the expression of a single material. In our recent residential project Mar Tirreno, the simplest thing to do was build one or two apartments per floor and then repeat the plan. Instead, we decided to shift this idea and design courtyard houses where the walls, the screen wall, the floors and everything in the residences were made of concrete block. We were interested in how we could achieve the maximum amount of expression with the minimum amount of words, and we tried to borrow this from El Eco Pavilion, a site-specific installation in the courtyard of the Museo Experimental el Eco in 2010, which was composed of cinder block. 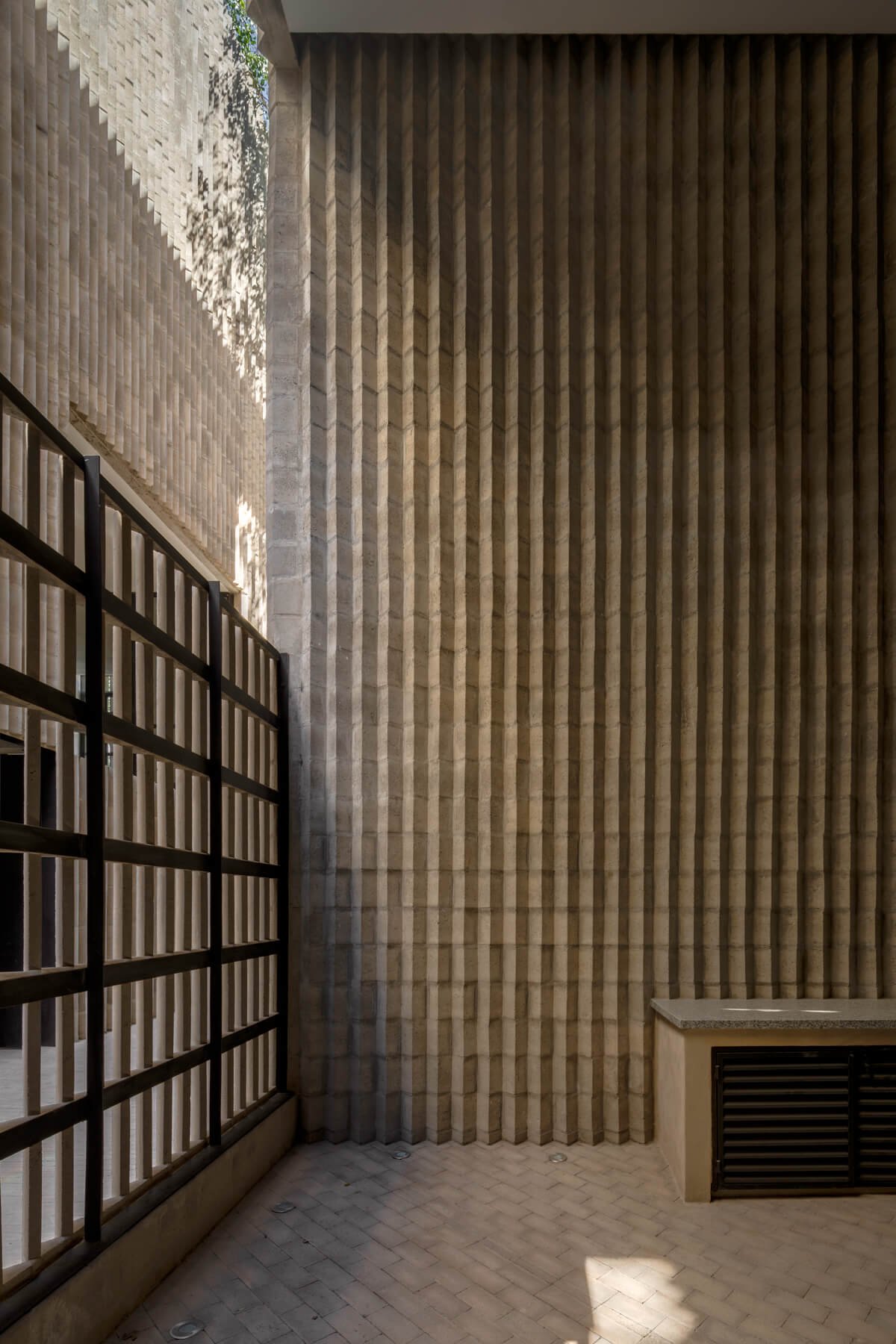 The developer immediately said, “No, I’m not going to spend a lot of money doing nine courtyard houses instead of nine apartments. You’re crazy.” And we responded: “When you’re finished with the masonry, you’re done. You don’t need any finishes; it’s going to look beautiful.” Ultimately, we convinced them, and completing the structure in a single material saved us a lot of money. Though the works are much different, they share the same economy of thought.

My vision has shifted throughout the years, but there are still certain things that I’ve always been curious about, especially the idea of self-representation and the way architecture can provide room for that. It’s not just the vision of the architect, but the people who live in the space as well. They should be present and visible.

Architecture isn’t just bricks and mortar for this architect, it’s about who’s between the walls — visible and invisible — as well.