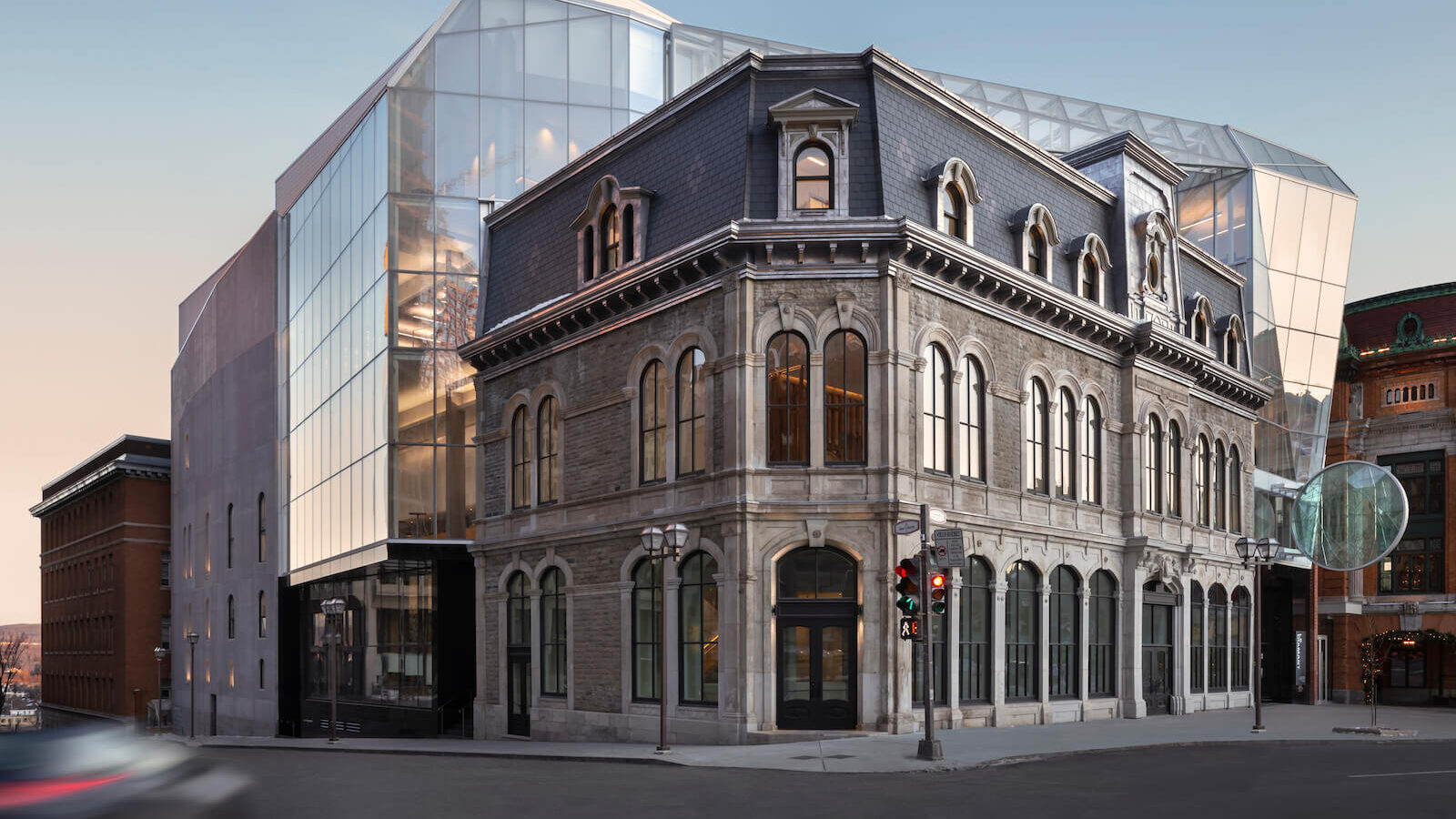 In Architecture: Adaptive Re-use, these two projects – a theatre in Québec City and an arts hall at the University of Chicago – fuse old and new with aplomb.

Diamant Theatre | Engraved in the Memory

A majestic crystalline prism bursting from its centre, the Diamant Theatre is striking in both effect and execution. The architects faced a seemingly impossible task: to build a performance and creation space at a central Québec City intersection already occupied by a Second Empire–style building that once served as a YMCA. After restoring the stone facade of the original heritage site, they built around it, tucking the new theatre — a multi-purpose, 650-seat venue in a concrete box — just behind the preserved structure. A serpentine glass and steel atrium, which contains public foyers and mezzanines, stretches overtop and touches down in the alleyways to either side. The connective tissue between the two buildings, this crowning jewel — which glows like an urban lantern at night — announces an innovative project as respectful of history as it is suitably theatrical, one that exemplifies infill architecture at its most nimble.

The Gordon Parks Arts Hall restores the two historic gable-roofed buildings of Belfield Hall at the University of Chicago while connecting and complementing them with a daring Gothic–modernist hybrid sheathed in glass and Indiana limestone. The peaked glass roof of the new 8,400-square-metre wing of the Laboratory School spans four solar chimneys that loosely evoke steeples or bell towers. The central feature of the interior layout, which includes classrooms, a black-box performance space and a gallery, is a 750-seat assembly hall modelled on Palladio’s Villa Rotonda — a circular space housed, deceptively, within an orthogonal building. With a few neoclassical elements thrown playfully into the mix, the mash-up of shapes and epochs may be atypical, but it perfectly suits the project — a space of synergy, diversity and collaboration.

Hutong Bubble 218 began as a fairly conventional restoration of a 300-square-metre hutong (alley) house dating back to the Qing Dynasty. MAD Architects reappointed the grey bricks, replaced the windows and restored the wood-filigree panels of the inner courtyard. Then the firm introduced a completely novel intervention: a duo of teardrop-like structures on the roof, each clad in polished stainless steel. The team made no efforts to disguise these bubbles — which contain living rooms — or blend them in with the existing structures. Instead, it drew a distinct line between the old and the new, suggesting that both have value. The work conveys reverence for history and excitement for the future.

In Architecture: Adaptive Re-use, these two projects – a theatre in Québec City and an arts hall at the University of Chicago – fuse old and new with aplomb.