A Decade of the AZ Awards

Looking back on some of our favourite moments from 10 years of the AZ Awards.

When the AZ Awards were launched in 2011, more than 600 submissions from 25 countries poured in for consideration — not a bad showing for a brand-new undertaking. Flash forward to today and the numbers are even more impressive: This year, more than 1,200 projects from nearly 50 countries were submitted for evaluation, the winners placing in a total of 20 categories (up from 14 a decade ago).

Over that period, the awards have also spawned a host of attendant traditions, from the illustrious Guests of Honour who now join us for our gala presentations in Toronto (staged virtually this year because of COVID-19) to the design of original installations for adorning said ceremonies. One of the most memorable interventions, by Castor Design, is recalled below, as are other highlights from AZ Awards seasons past. Incidentally, the customary material for 10th-anniversary gifts is tin, which may lack a certain glamour, but is strong and resilient — estimable qualities to have, in this most unusual of years, as we celebrate the past while looking forward to the future. 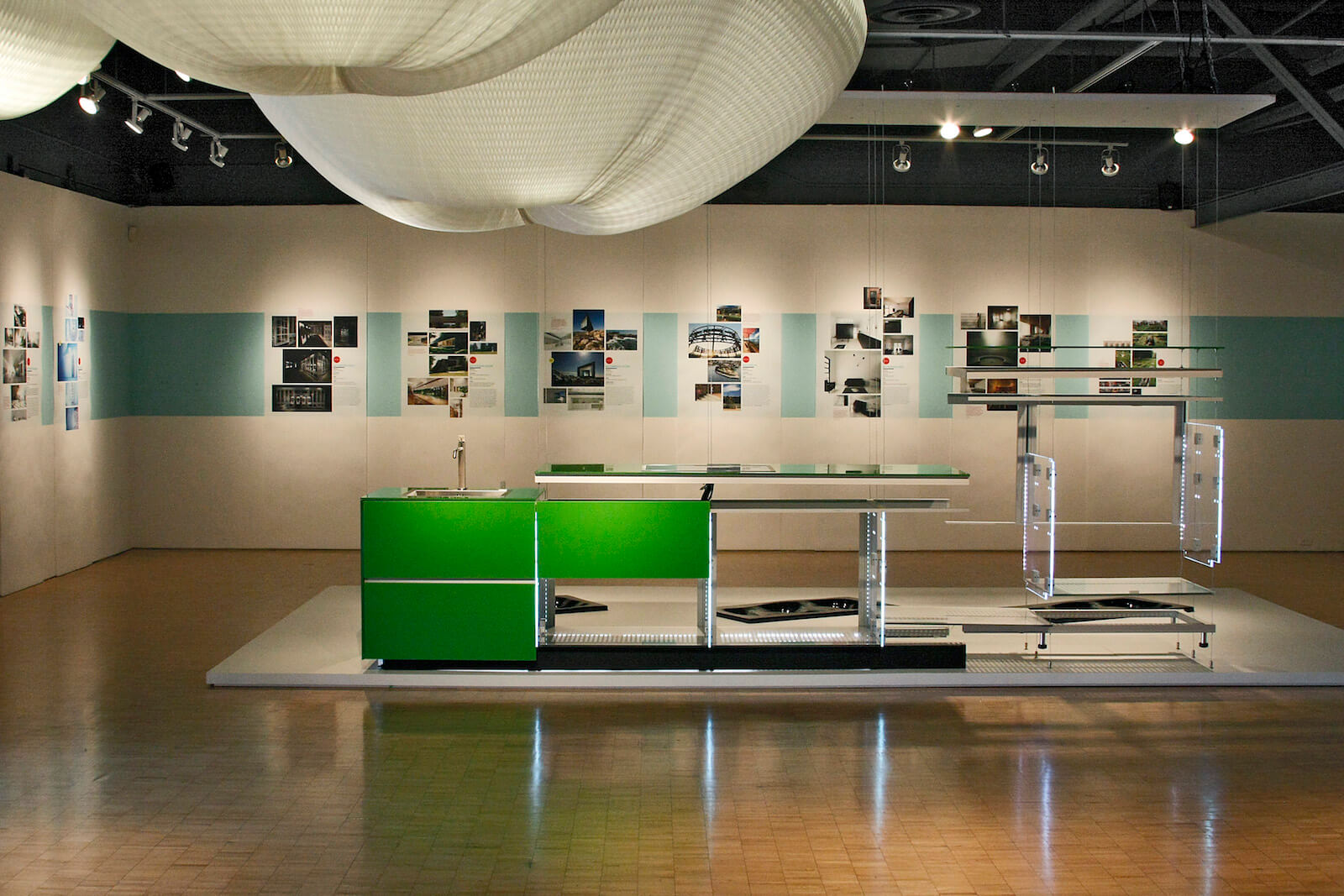 The very first installment of the AZ Awards was the opposite of a showstopper: It actually inspired the putting on of a show. Running for more than three months at Toronto’s Harbourfront Centre, the 2011 AZ Awards Exhibition showcased the chosen works of the inaugural winners and finalists, presenting everything from photographs and drawings to a full-size sample of the top pick in the Best Furniture System category: Gabriele Centazzo’s luminous glass-clad kitchen cabinetry for Valcucine. Among others represented were architect Todd Saunders, designer Philippe Starck and then-student (now Partisans cofounder) Alex Josephson. 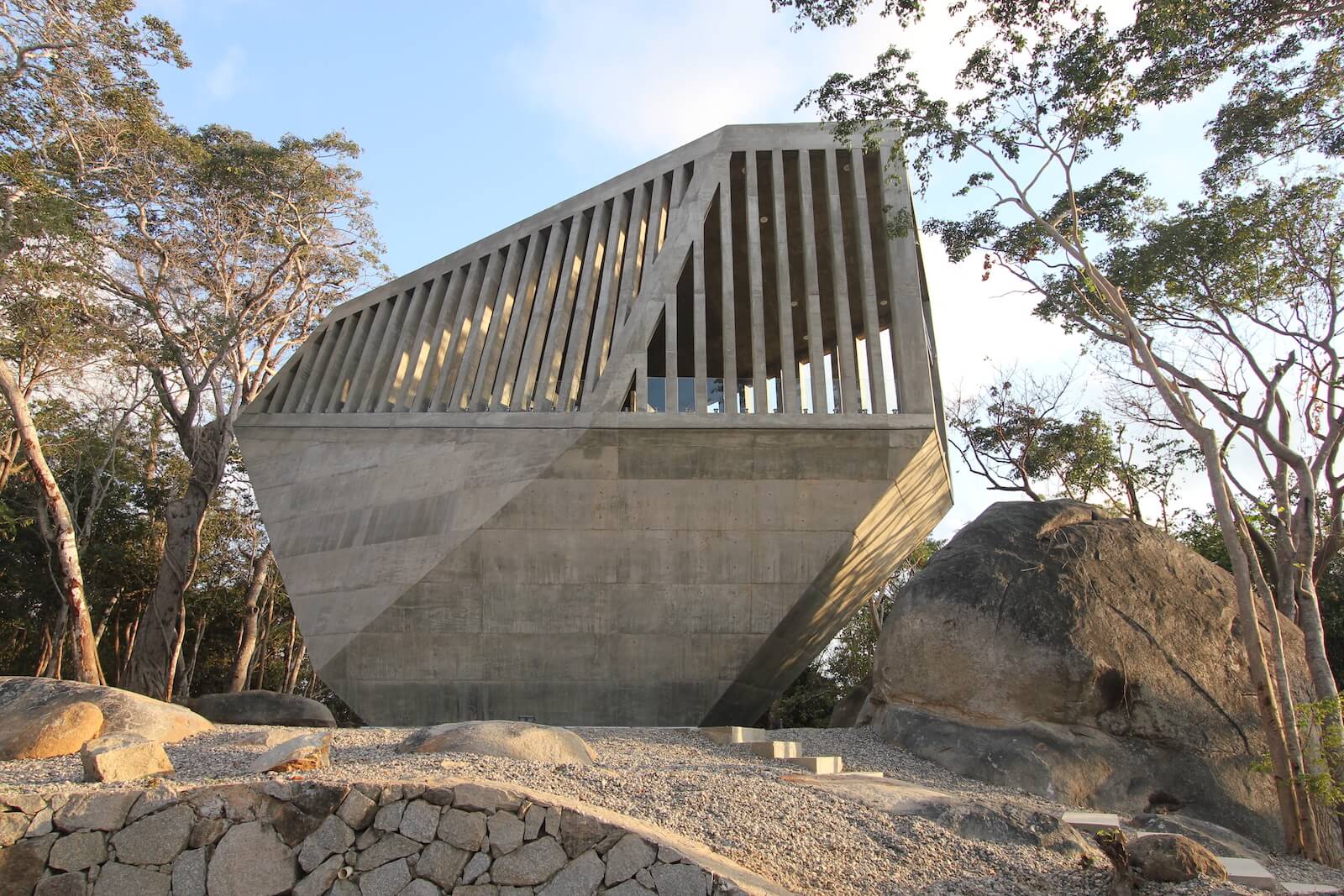 From Italian furniture to Scandinavian product design to building-boom-fuelled Chinese architecture, certain countries and regions have tended to dominate particular categories. Occasionally, though, a sleeper nation will emerge from the pack, causing us to look at its design culture in a whole new light. Such was the case in 2012, when Mexican projects were named both the Best Commercial Building Under 1,000 Square Metres (that was BNKR Arquitectura’s strikingly angular Sunset Chapel, pictured here) and a finalist in the same category (Mexico City restaurant Tori Tori, by Rojkind Arquitectos with Esrawe Studio). Since then, Michel Rojkind and Héctor Esrawe have become perennial favourites of Azure’s (Esrawe’s latest Tori Tori outpost is a 2020 finalist), their work reflecting their home country’s now-powerhouse design status. We’ve been proud to have had a hand in promoting the revolution. 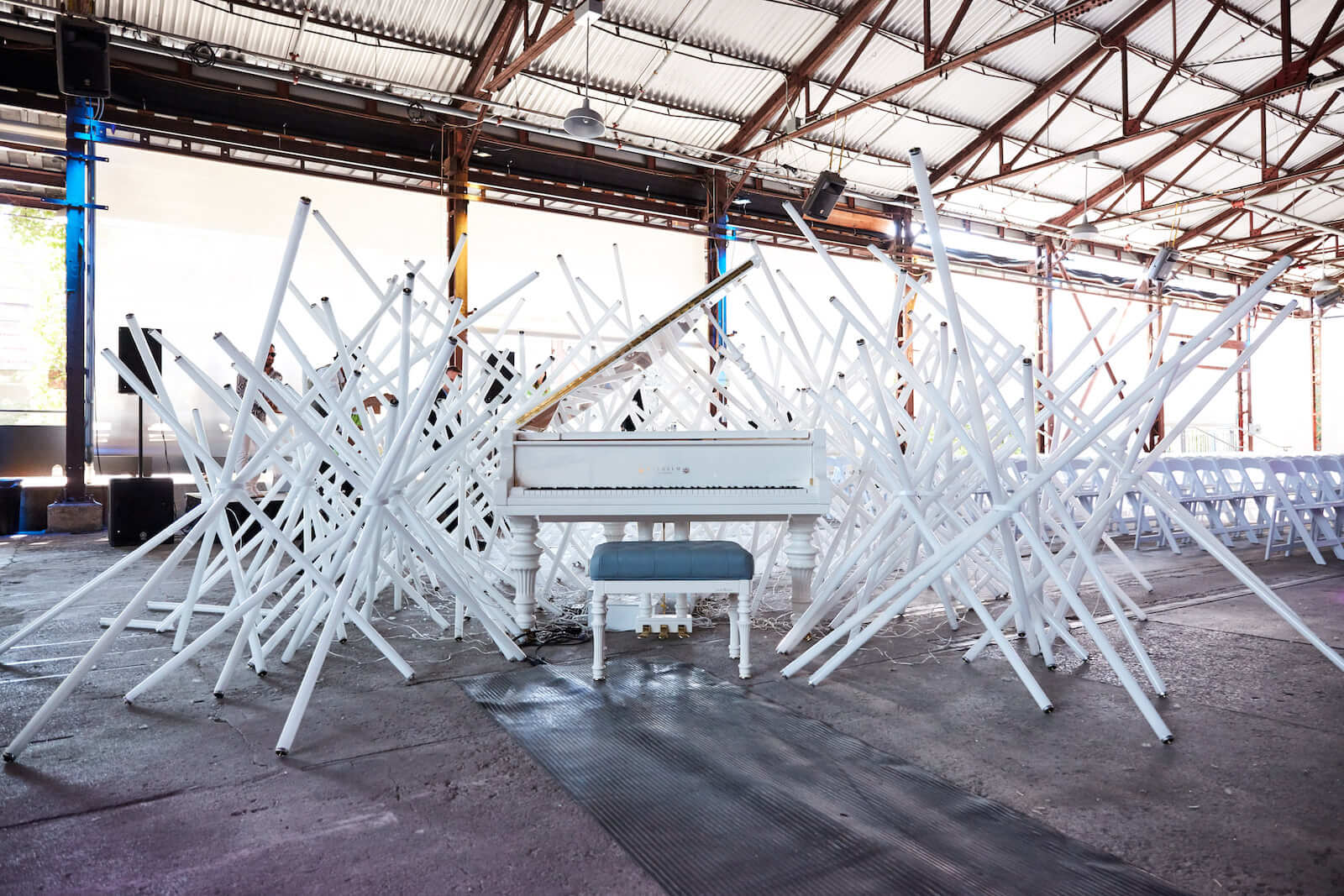 Over the years, a number of site-specfic installations have added oomph, edge and wow factor to the AZ Awards presentations. One of the most ambitious was Castor Design’s large-scale sculpture encircling a white piano during the 2016 gala at Toronto’s Evergreen Brick Works. Composed of hundreds of fluorescent light tubes, the interactive design employed wireless induction to illuminate individual bulbs in response to sounds from the instrument. The result was a simultaneous light show and musical performance with every chord struck — true medleys of sight and sound. 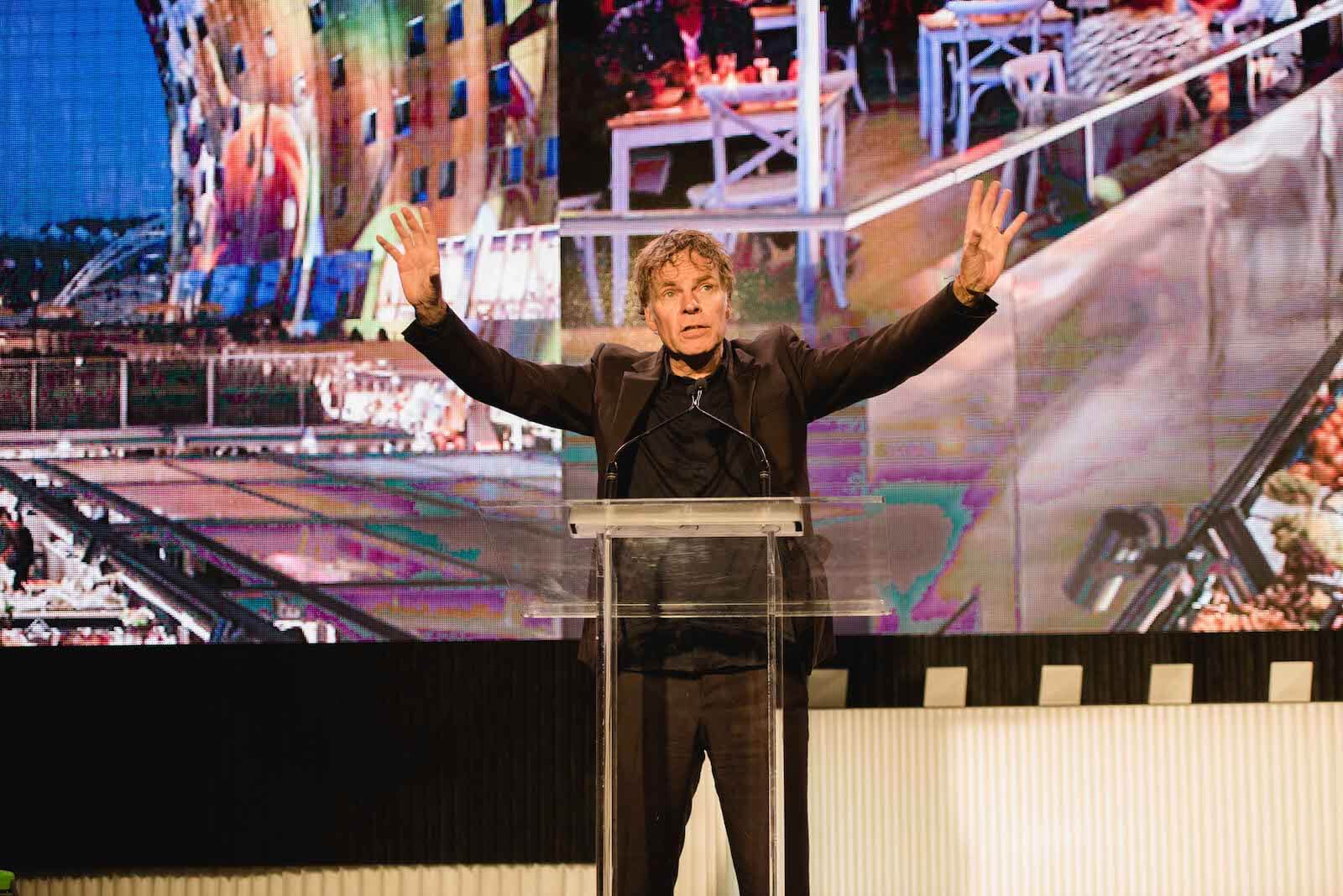 The list of our Awards-night Guests of Honour constitutes a who’s who of the design world and encompasses practically every discipline. In 2016, one of the fathers of “design art,” Gaetano Pesce, lent his unique presence to the festivities, while landscape architect Martha Schwartz, appearing three years later, electrified the audience with an urgent call to decarbonize the planet. In 2018, MVRDV co-founder Winy Maas (pictured) flew in from the Netherlands to take part in the gala, where he memorably regaled the crowd with his vision of the future, including a need to think bigger. 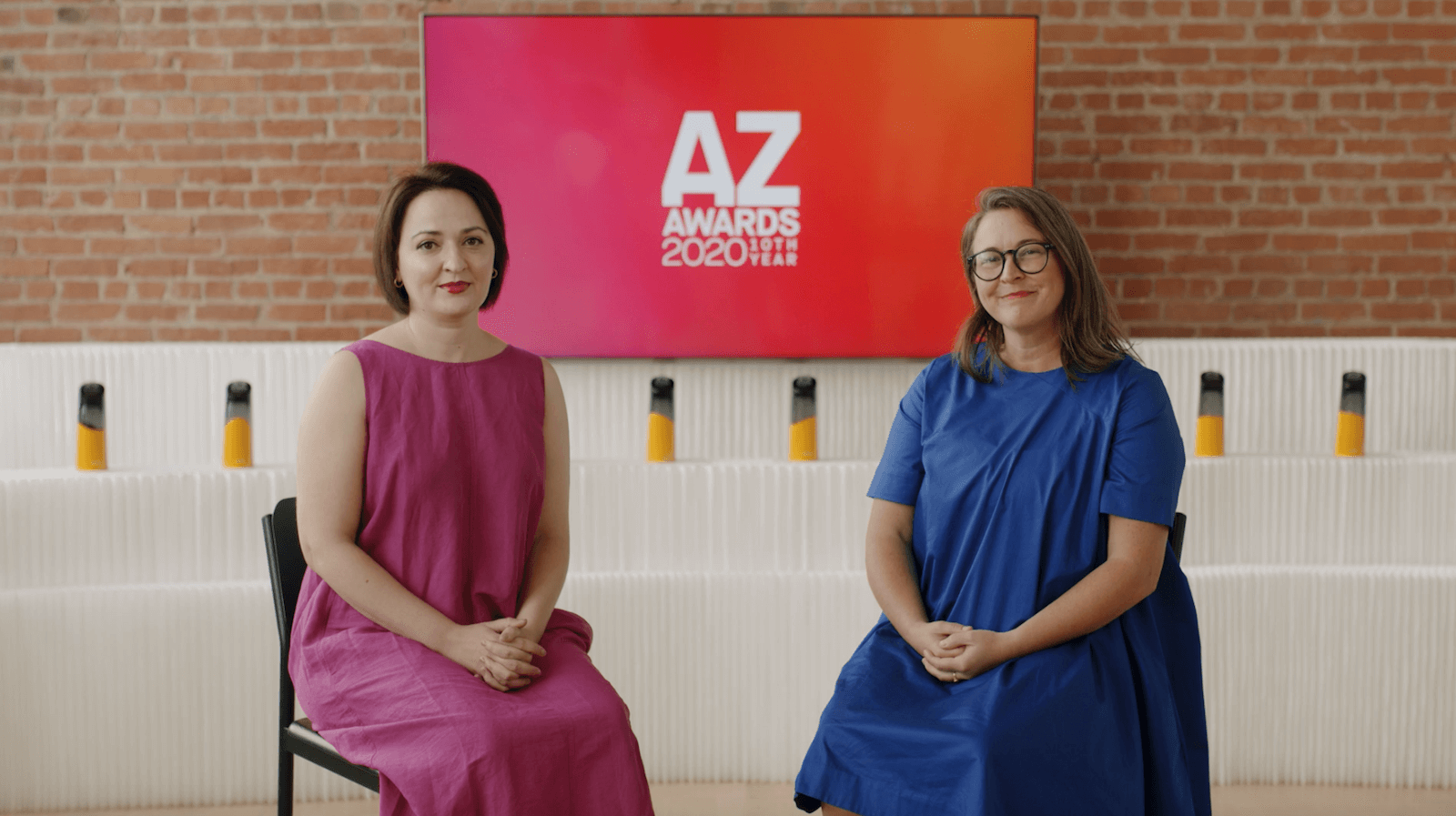 This year, in light of – well, everything! – we took the show virtual. The AZ Awards Gala featured Azure executive editor Elizabeth Pagliacolo (left) and MC Jess Allen (right), who announced the 20 winners. The online event included special appearances by AZ Awards All-Stars Karim Rashid, Claire Weisz, Nader Tehrani and more. And it also included a signature cocktail prepared by the inimitable George Yabu and Glenn Pushelberg. If you missed the show you can watch it on Azure’s Youtube and Facebook platforms.

Looking back on some of our favourite moments from 10 years of the AZ Awards.