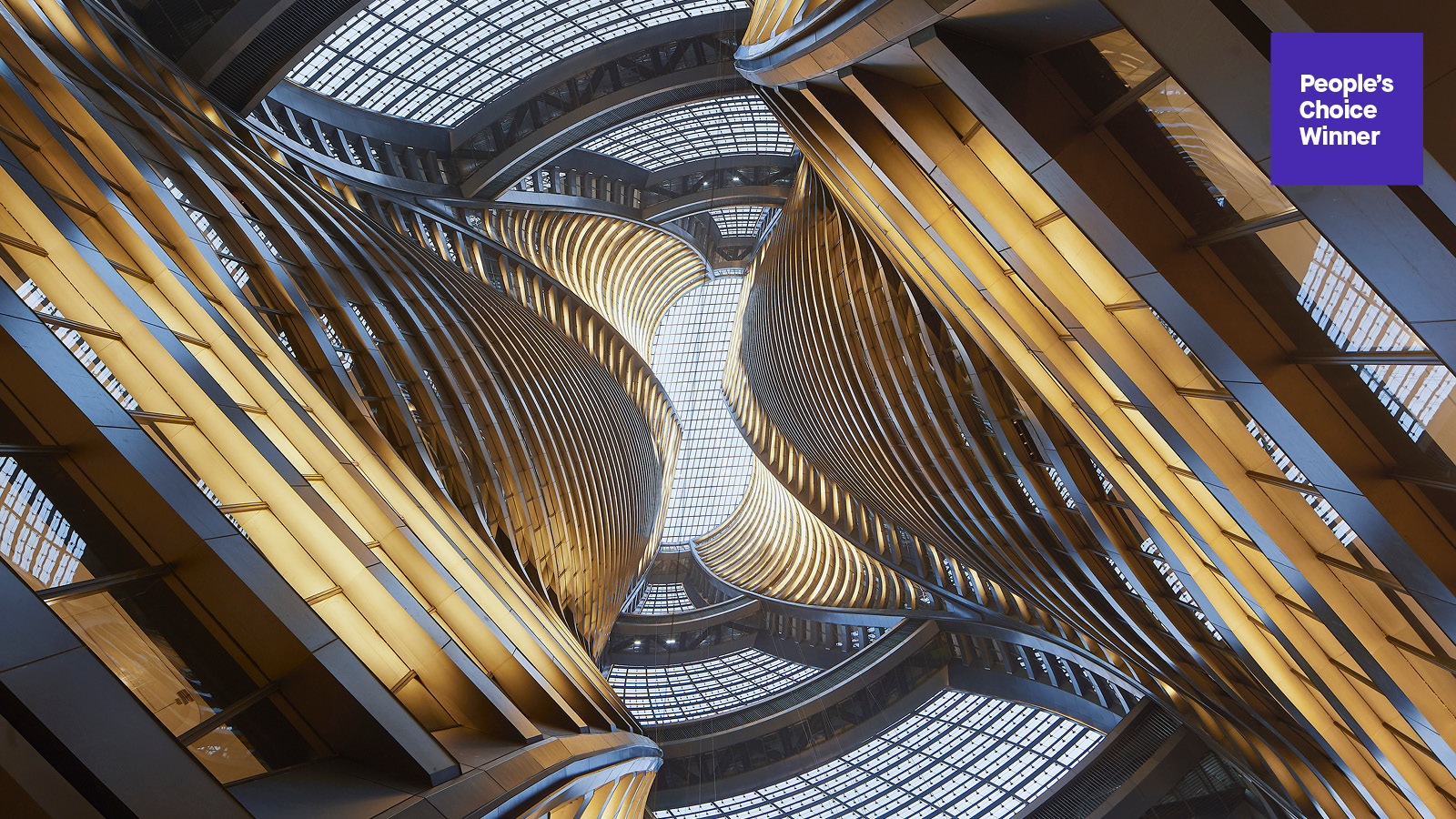 Combining balletic gracefulness with bracing originality, the Leeza SOHO in the Fengtai business district of Beijing comprises two “halves of a tower” (both with grade-A office space) within a single shell. The exterior bulges and narrows thanks to custom-designed stepped windows that vary in size and shape, while inside the two tower halves appear to dance — they twist and turn and occasionally touch one another via elevated walkways. More dramatic still is the negative space between them: a light well that runs the entire 45-storey height of the 172,800-square-metre structure, making it the world’s tallest atrium.

Tradition and innovation collide at the MOMA Lotus Resort, a 2,850-square-metre retreat with meditation spaces, meeting halls and tea rooms, located near Mount Jiuhua, a Buddhist pilgrimage site in China’s Anhui Province. Lacime Architects committed, for the most part, to using clean lines, as evidenced by the grey brick walls, the simple wooden soffits and the glassy pond that surrounds the building. This makes the occasional vernacular flourishes they injected all the more stunning because they’re unexpected. The sloped roof and square courtyard are fashioned after a siheyuan, a traditional Chinese home, and the main hall features ornate trusswork, an exquisite element that both enlivens and sanctifies the space.

With an undulating roofline that appears as if it’s sculpted from clay, the Ayla Golf Academy and Clubhouse in Aqaba, a coastal city in Jordan, is a feat of sophisticated engineering executed by artisanal means. After teaching local workers shotcrete pouring techniques, the firm and its on-site team then cast the curvaceous structure, which is evocative of both the surrounding dunes and the tents of ancient Bedouin encampments. Beneath this canopy, the 1,200-square-metre building’s openings are delineated with Corten-steel screens redolent of the mashrabiya latticework found in traditional Islamic architecture. The project, which also includes two smaller structures that contain comfort stations, is as sensitive to local vernacular as it is to its surroundings: A Jordanian artist was commissioned to mix regional pigments into the concrete, giving the Ayla Clubhouse its striking ruddy hue.

Minimum-Security Area and Penitentiary Services for Integration and Probation

Your typical penitentiary is a grim, fortified edifice far removed from community and culture. Not so the Minimum-Security Prison of Nanterre, a suburb of Paris. Located in a mixed-use neighbourhood, the 4,350-square-metre building is surprisingly congenial. It’s clad in perforated weathering steel, and the interior palette consists of lacquered aluminum and fine mineral plaster — bright materials that enliven the space. At the centre of the structure is a vibrantly coloured exercise yard, while on the southern facade a rectangular cut brings sunlight into a secure but well-lit courtyard. The building comprises administrative offices and a minimum-security unit where inmates participate in a rehabilitation program: They are granted temporary passes to leave and engage with the wider community. If prison architecture is usually panoptic and secretive, the Nanterre complex exudes warmth and transparency.