The once-dreary underpass is animated by LEDs that transform movement into dramatic, colourful, displays.

In Calgary, the Canadian Pacific Railway slices through the heart of the city, dividing the downtown core from the Beltline neighbourhood. On a daily basis, tens of thousands of vehicles and pedestrians transit below its hulking underpasses, key gateways that have deteriorated over the years.

Commissioned by the City of Calgary as part of a larger rehabilitation project, local firm Marc Boutin Architectural Collaborative reanimated the dreary 4th Street SW underpass with a corridor of light and colour. “It’s pragmatic and poetic,” says principal Marc Boutin, “a combination of traffic infrastructure, urban armature and public art woven together.” 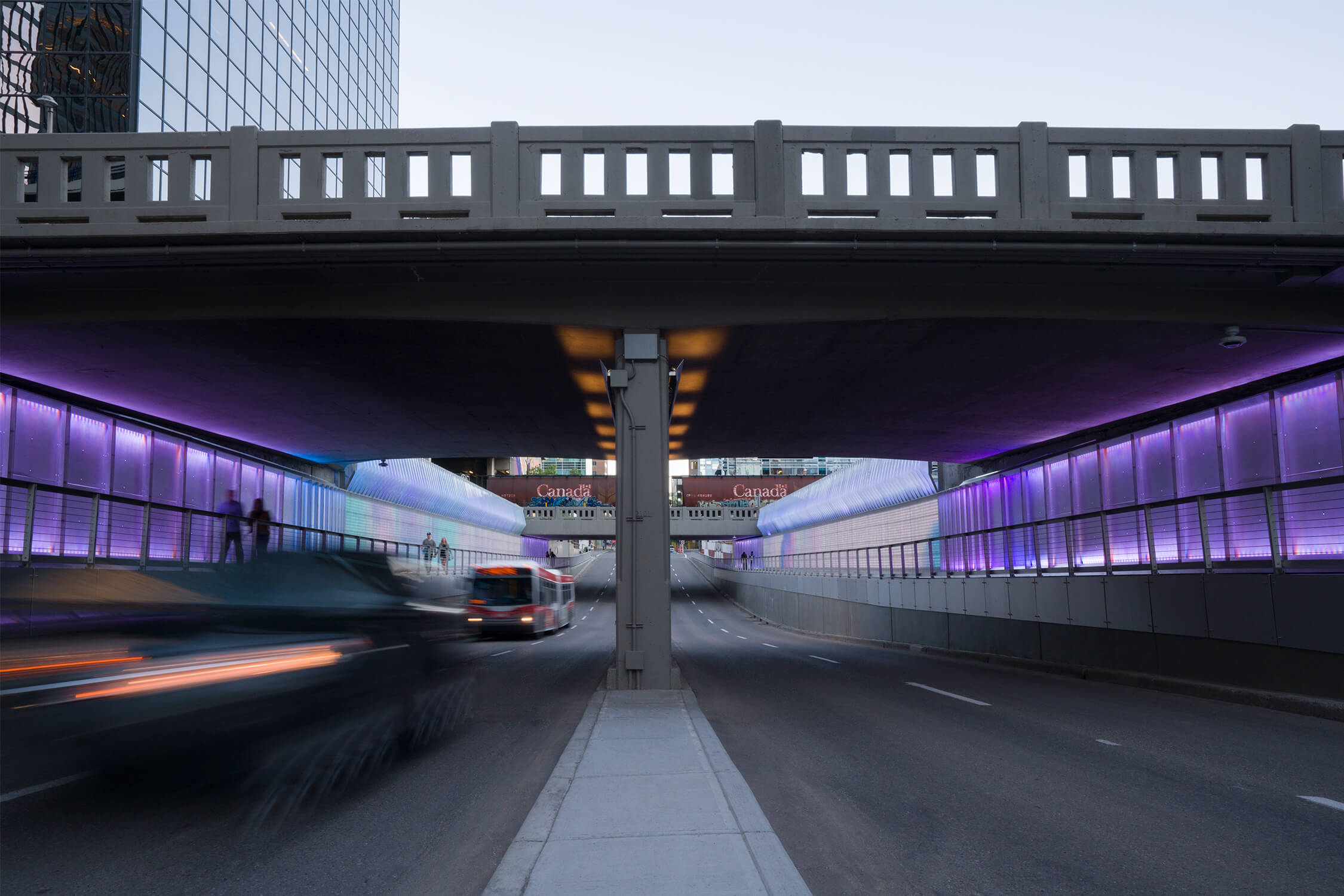 LED screens on either side of the underpass transmit the movement of pedestrians and cyclists as ever-fluctuating displays.

At the beginning of the design process, the firm analyzed how pedestrians moved through the subterranean space. “As people descended into the underpass, it changed how they acted,” says Boutin. “They became mechanized. Their heads didn’t turn from side to side.” Working in collaboration with renowned Polish artist Krzysztof Wodiczko, who is known for his provocative light and video projections, MBAC designed a space that functions as a new stage for interaction. 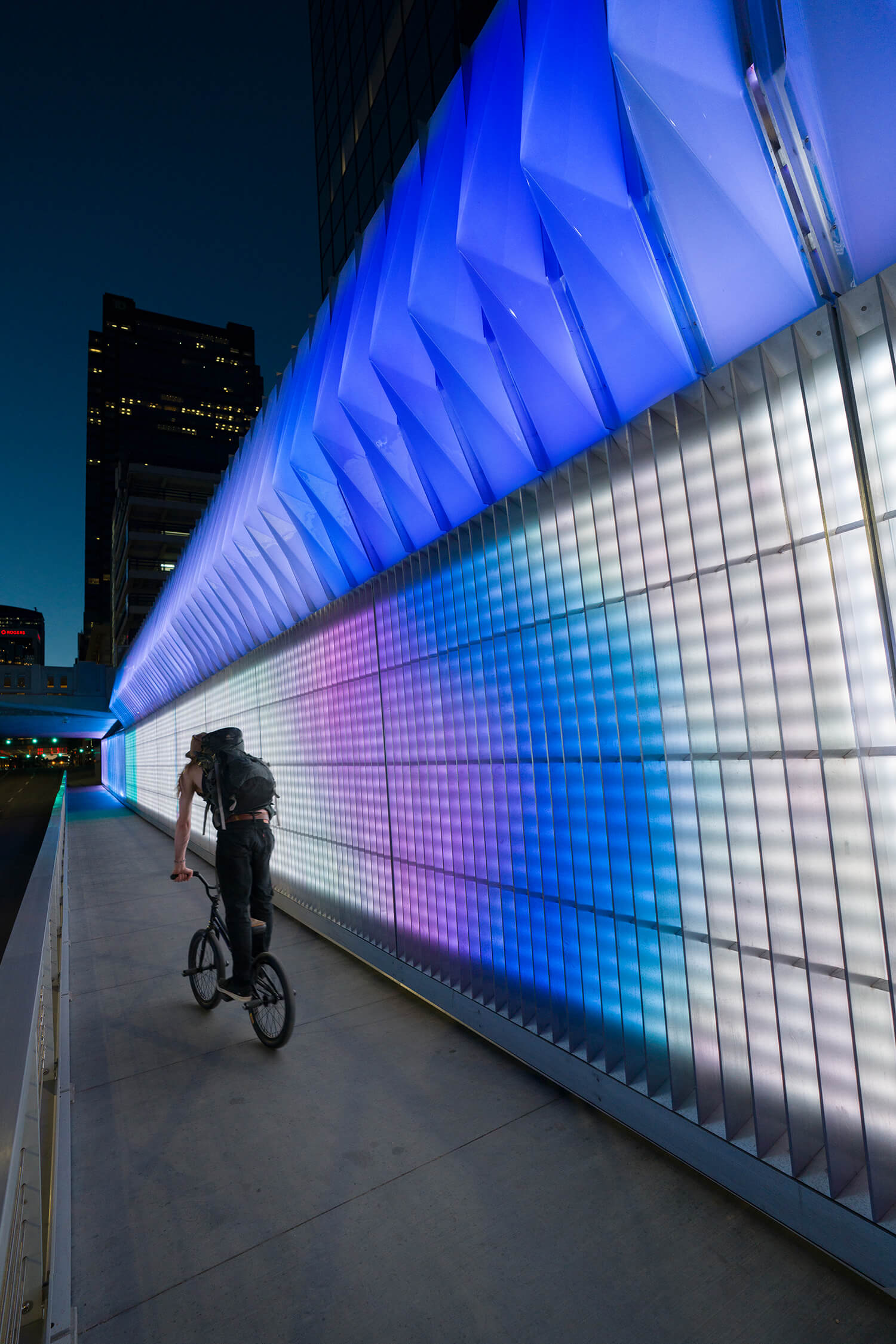 Running on software developed by technology studio INVIVIA of Cambridge, Massachusetts, three metre-tall interactive LED screens sense the movement of passersby and then render an abstracted avatar on additional LED displays on the opposite wall, separated by four lanes of traffic.

The avatars’ colours fluctuate in intensity with ghostly afterglows. “It was very important that every time a person went through, it was a different experience,” says Boutin. “In that way, it would be timeless. If it was graphic- or image based, people would get used to it and then it becomes benign.” 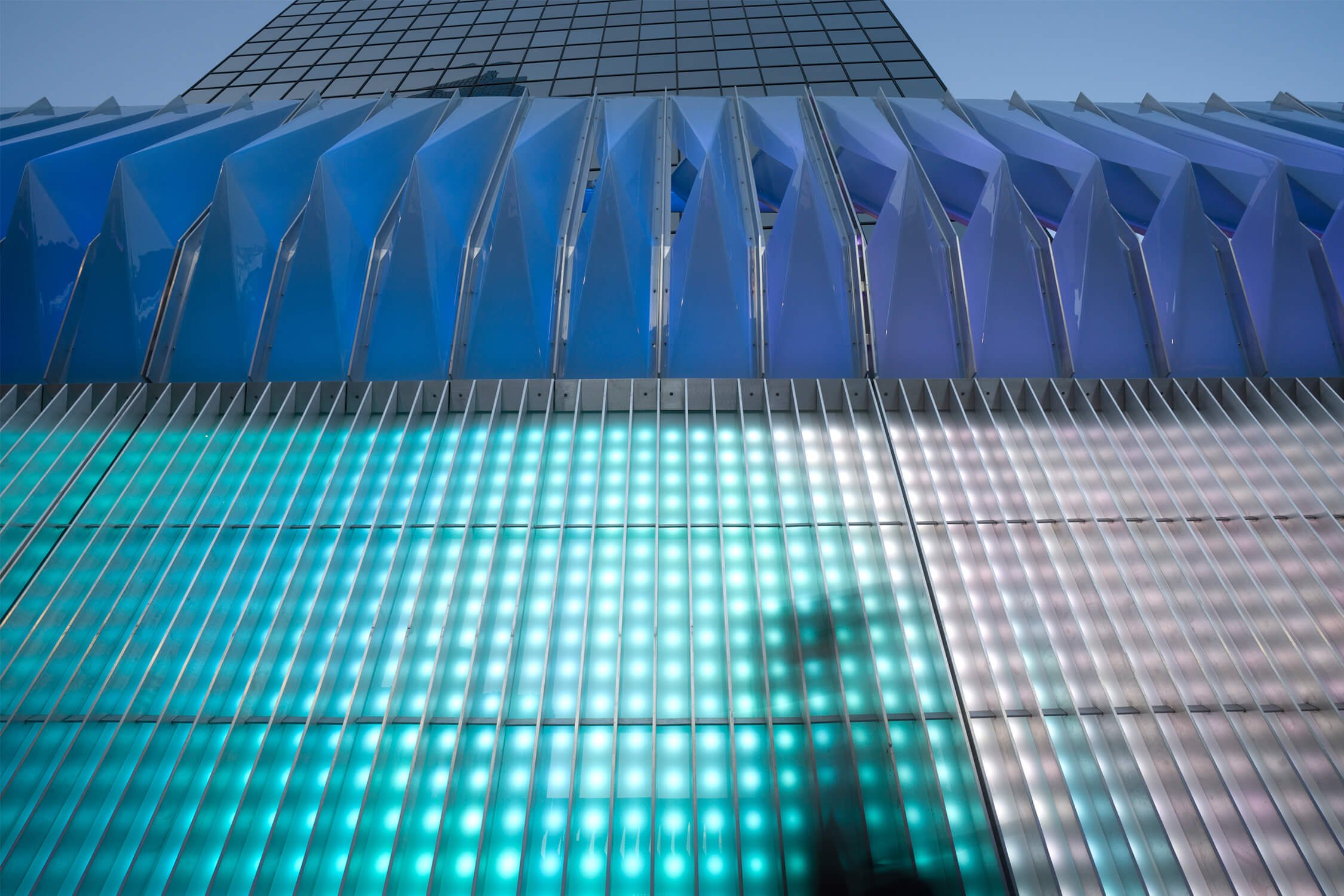 To protect against vandalism, a series of vertical polished aluminum fins was installed over the tempered glass screens that cover the grid of lights. Walking past the installation, a passerby sees only diffuse light emanating through the fins on their side, but can see a full image across the street. A sculptural veil made of polycarbonate sheeting is affixed above the panels and illuminated with LEDs. 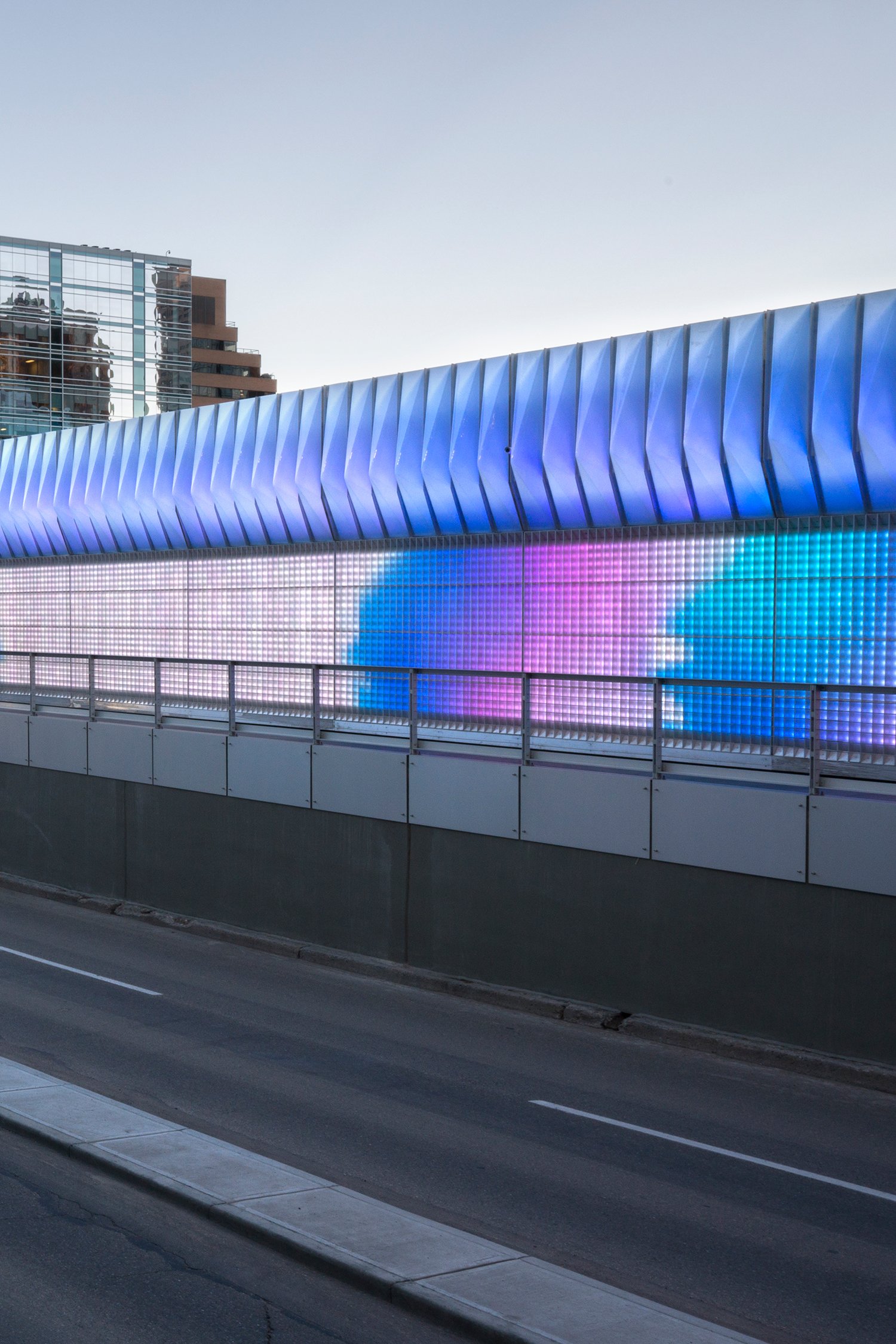 The removable modules include aluminum fins, tempered glass and LEDs. A polycarbonate veil guards against vandalism.

Since infrastructure is maintained by the city, it was important that the lights would be easily accessible for any repairs. Stretching two blocks, the surface is actually made up of several modules — each around half a metre wide — that can be removed for servicing. 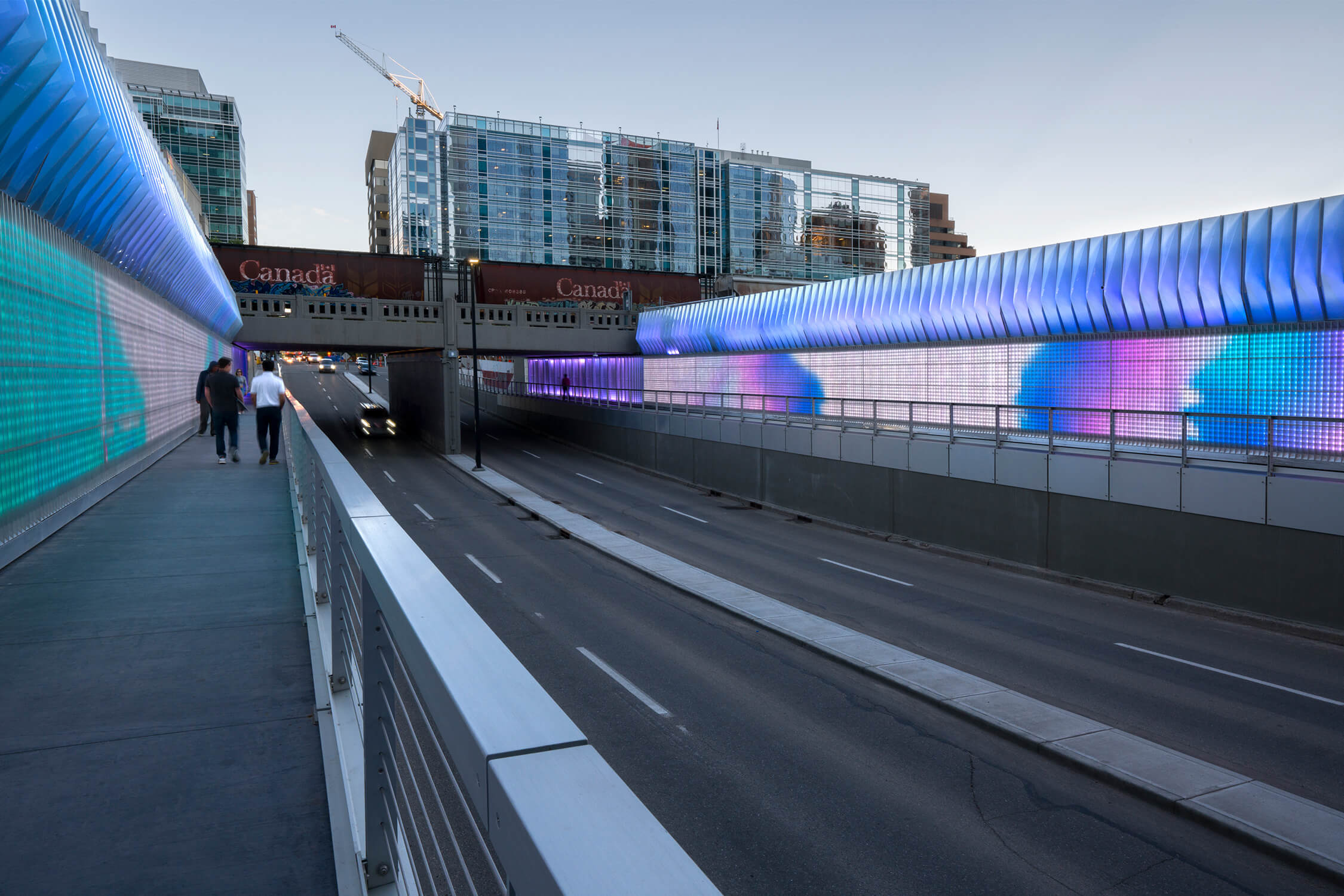 Having originally described Calgary’s underpasses as “the worst elements of the public realm,” Boutin has turned this one, at least, into an animated, ever-changing thoroughfare. People, he notes, have “started to get out of their slumber, raise their heads and take in the urban environment.”

The once-dreary underpass is animated by LEDs that transform movement into dramatic, colourful, displays.