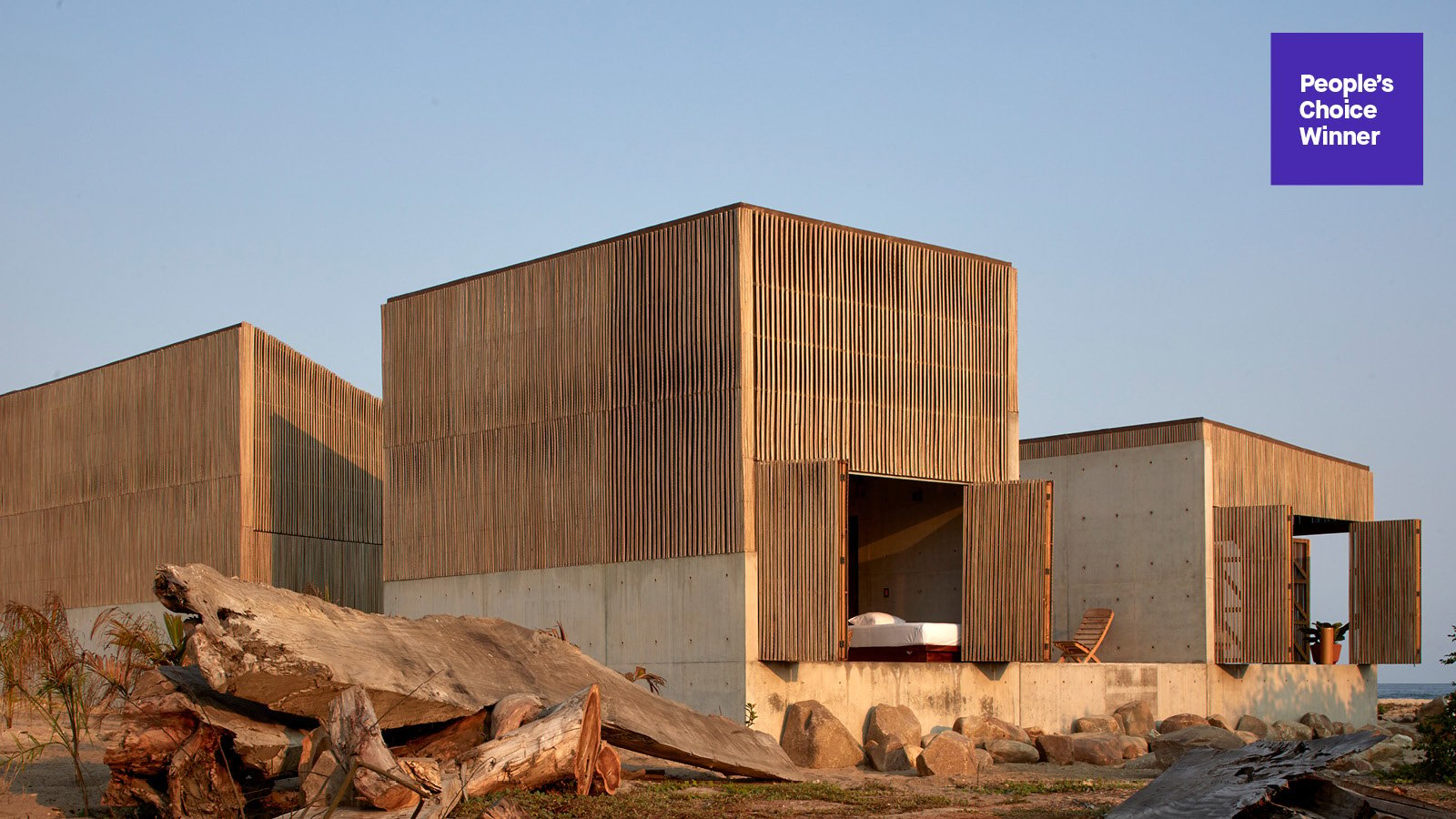 These award of merit winners occupy diverse sites across the globe, but all share a common goal of elevating the typology of the single family home.

A quartet of seven-metre-tall huts, BAAQ’s Casa Naila sits atop a concrete plinth on a 250-square-metre beach property in Oaxaca. Each box is distinctively wrapped, partially by concrete walls and partially by slatted palm wood enclosures supported by wooden framing. This vernacular building technique, which allows cross ventilation and natural light to filter through, is complemented by the simplicity within. The spacious lower level features a floor made of earth and clay (which, as authentic Oaxacan cuisine dictates, is also the material of the stove in the communal kitchen) and is topped with a cozy loft. In the cross-shaped space between the huts, the architects set planters, an outdoor dining area and a central pool. The broken-up nature of the design enables maximum flexibility: The site can house up to 15 people at a time, perhaps fewer due to physical distancing.

Like a painting by Agnes Martin, Casa Cosmos by S-AR is a grid formation imposed on a varied landscape — a scrubby plot in Oaxaca, Mexico, near the Pacific Coast. At the heart of this 100-square-metre dwelling, a concrete cube divided into quadrants contains a living room, bedroom, kitchen and bathroom. Surrounding this inner core is an external grid with flower beds, terraces and a pool, each part sectioned off by columns and beams. A series of sliding wooden doors made by local artisans allows for ease of movement between the indoor and outdoor domains. Perhaps the best feature, the rooftop patio offers views in all directions and to the sky above, which is also reflected in a pond — the circular centrepiece of this otherwise square abode.

The Double Header House in British Columbia’s capital is unlike any other duplex you’ve seen. Architect D’Arcy Jones was commissioned to build two connected units for a multi-generational family, but neither of the obvious approaches was satisfactory: A stacked arrangement would mean that only one unit could have access to the ground, whereas a side-by-side configuration would necessitate long, narrow interiors with limited natural light. So Jones set the units back to back, with an airlock between them. Each opens onto its own porch and yard. The “heads” of the houses are outfitted with triangular wall fins and trussed pentagonal overhangs made of wood and corrugated metal. These features guide sightlines and protect the interiors from the elements, but they also have a sculptural quality: The homes resemble flowers opening toward the sun.

The Boulder House is a deft response to a seemingly impossible brief: to create a home for an actor couple in Seoul’s trendy Gangnam neighbourhood that gives the clients maximum privacy. For inspiration, architect Junsang You looked not to the modular towers or manicured residences of the surrounding streetscape but rather to a more ancient form: geology. He clad the home in chunks of Alps Snow, an Italian quartzite with a uniform horizontal pattern; the facade appears, from a distance, like a single rock face. The windows are strategically placed to allow maximum light penetration but minimal exposure. Each sits behind a set of wooden louvres, which were custom-made to conceal the metal hardware. Like a geode, the interiors of this four-storey abode are surprisingly bright. Although the house hardly mimics its surroundings, it somehow fits in: It seems elemental, like it’s been there forever.

Redfern Warehouse The past lives of the Redfern Warehouse, in Sydney, Australia, built at the beginning of the 20th century, are many: It has served as a gas-meter factory, a Vegemite producer and an art gallery. Then, local architect Ian Moore was commissioned to adapt it for a  family of four. He retrofitted the bottom level to serve the clients’ rather idiosyncratic vocations and hobbies. It now has an equine genetics lab and a 10-car garage modelled on a Formula One pit. The living area resides above, capped by the original trussed ceiling. Moore did everything he could to preserve the features of the old warehouse. He exposed the weathered brick walls, installed unobtrusive grey cork floors and avoided slick detailing (such as marble or black finishes) that would override the industrial character of the site. The result is a building that is more beautiful than ever but hardly estranged from its former self.

These award of merit winners occupy diverse sites across the globe, but all share a common goal of elevating the typology of the single family home.