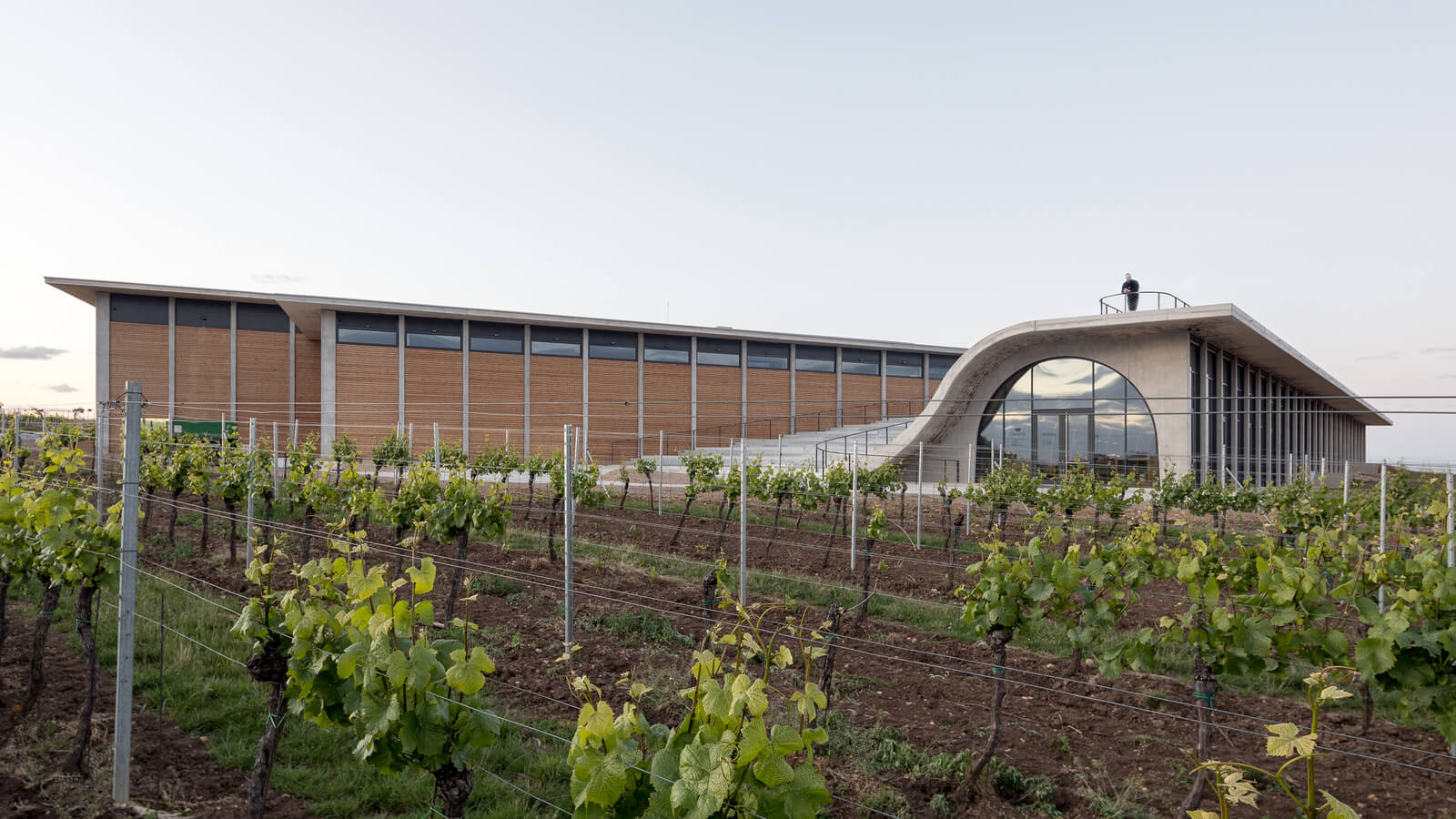 In the Czech Republic, a Dramatic Winery Elevates Local Viticulture

Hectares of vineyards dot the landscape of South Moravia, the Czech Republic’s capital of wine. Grounded in the region’s viticulture tradition (which dates back to the third century) and gracefully occupying a site on the outskirts of the town of Znojmo, Chybik + Kristof’s new Lahofer Winery is deeply connected to the area’s topography and history.

“You couldn’t copy and paste this building somewhere else,” says Michal Krištof, principal of the architecture and urban design practice behind the 3,842-square-metre structure for one of the country’s largest wine producers. “It comes from these roots, from this society.” 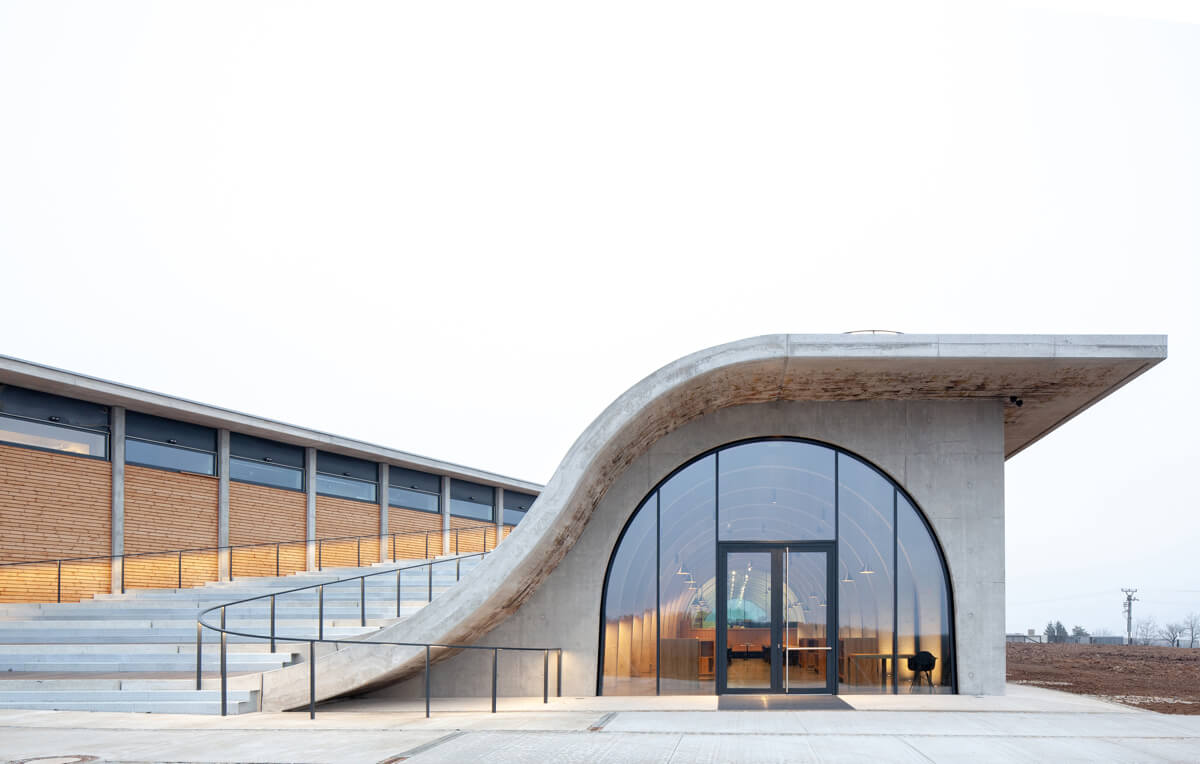 Consisting of three adjoining masses tied together by two courtyards, the winery is centred in a concrete, wood and glass main building that appears to rise above the landscape like a surge before flowing back into it. Behind a large curved window, the barrel of the wave offers a view into the vaulted tasting room, which is framed by a succession of exposed concrete arches that are a contemporary take on the region’s underground cellars. 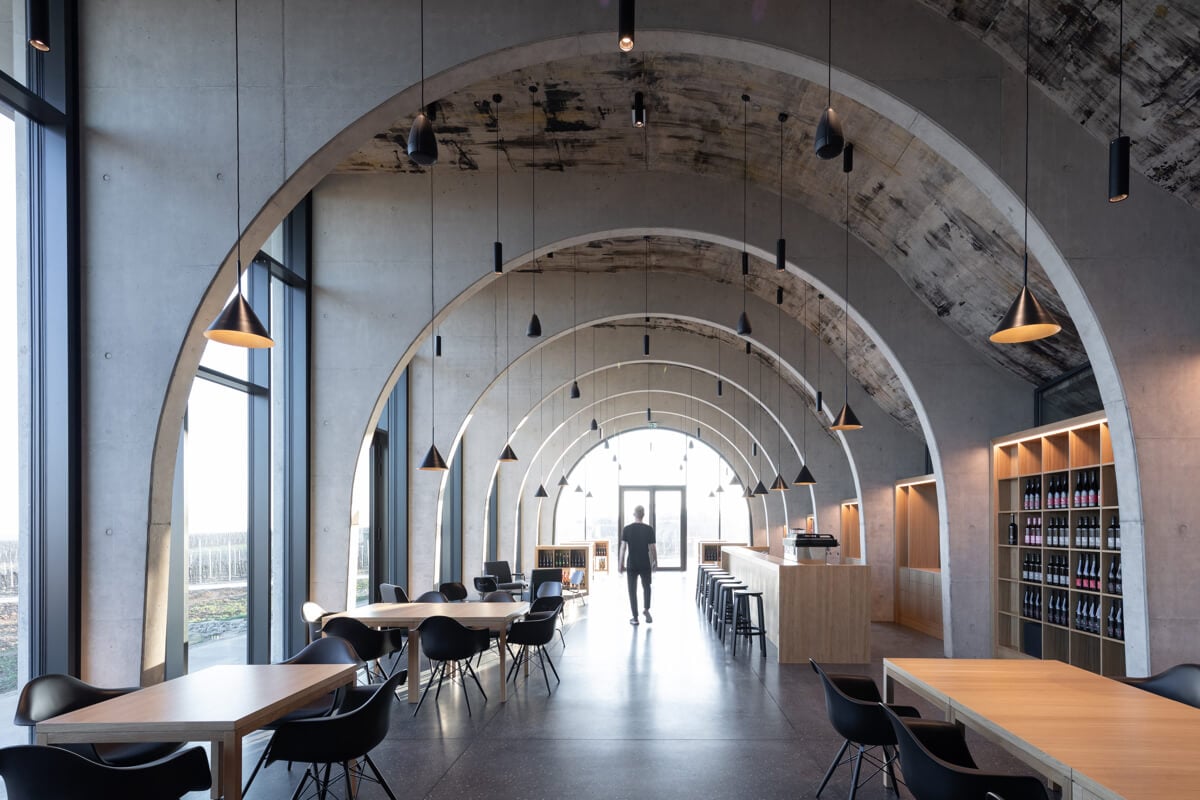 Dotted with black pendants hung at varying heights, the raw cement ceiling between the smooth frames (each individually designed to fit at a particular angle) is painted in shades that reflect the colours of the soil. While Chybik + Kristof had originally planned to cover the ceiling with wood, the design team soon noticed black marks on certain areas (due to natural chemical reactions as the material dried) that recalled the work of Czech painter Patrik Hábl, so it called on the artist to complete the canopy. His graphic strokes of earthy hues now soften the dramatic interior. 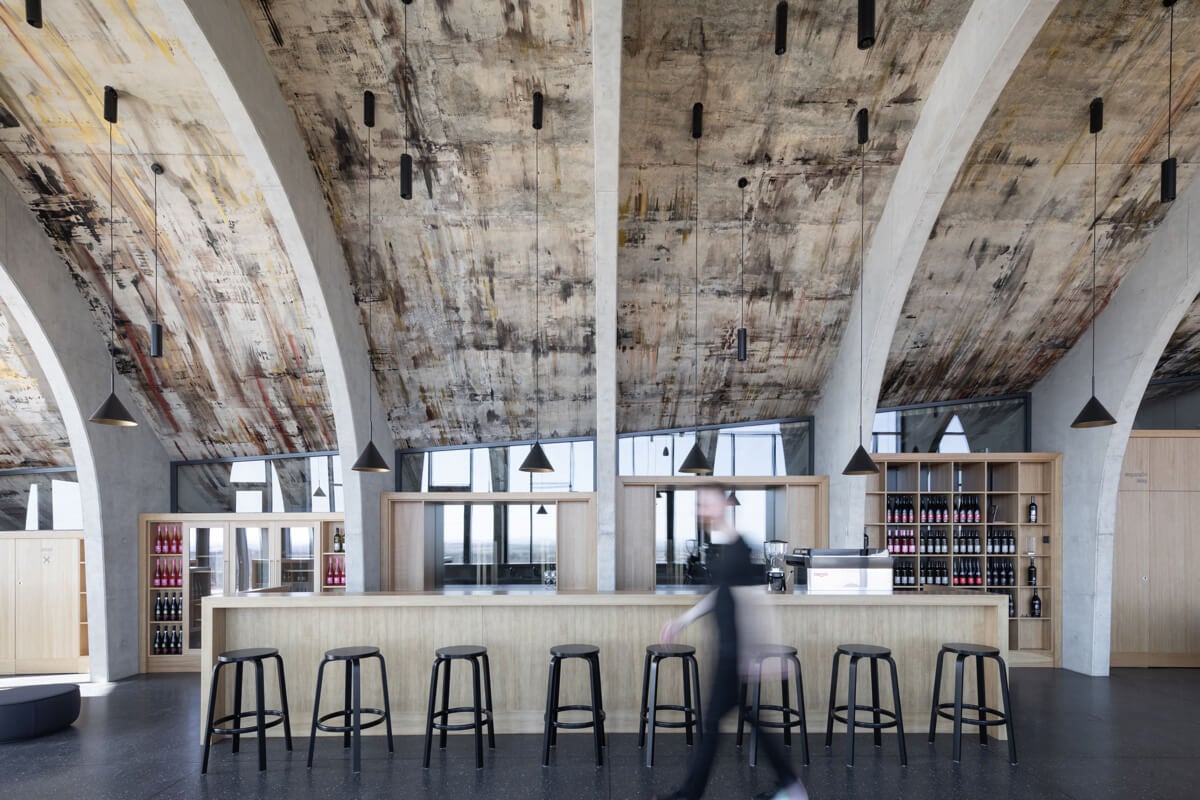 The curvaceous structure is also a deliberate continuation of the surrounding terrain’s features. “Though we followed the archetypal shape of the wine cellar,” says studio co-founder Ondřej Chybík, “there’s also a very strong implementation of the building into the landscape, as the distance between the arches is the same as the dimension of the vineyards.”

But the connection doesn’t end there. “This shape continues on the exterior,” Chybík adds. “You can read the building from inside to out, from outside to in.” Outside, the roof dips down into a concave courtyard of steps to form an amphitheatre that leads to the rooftop — the crest of the wave. There, panoramic views stretch across the property and beyond to Znojmo. 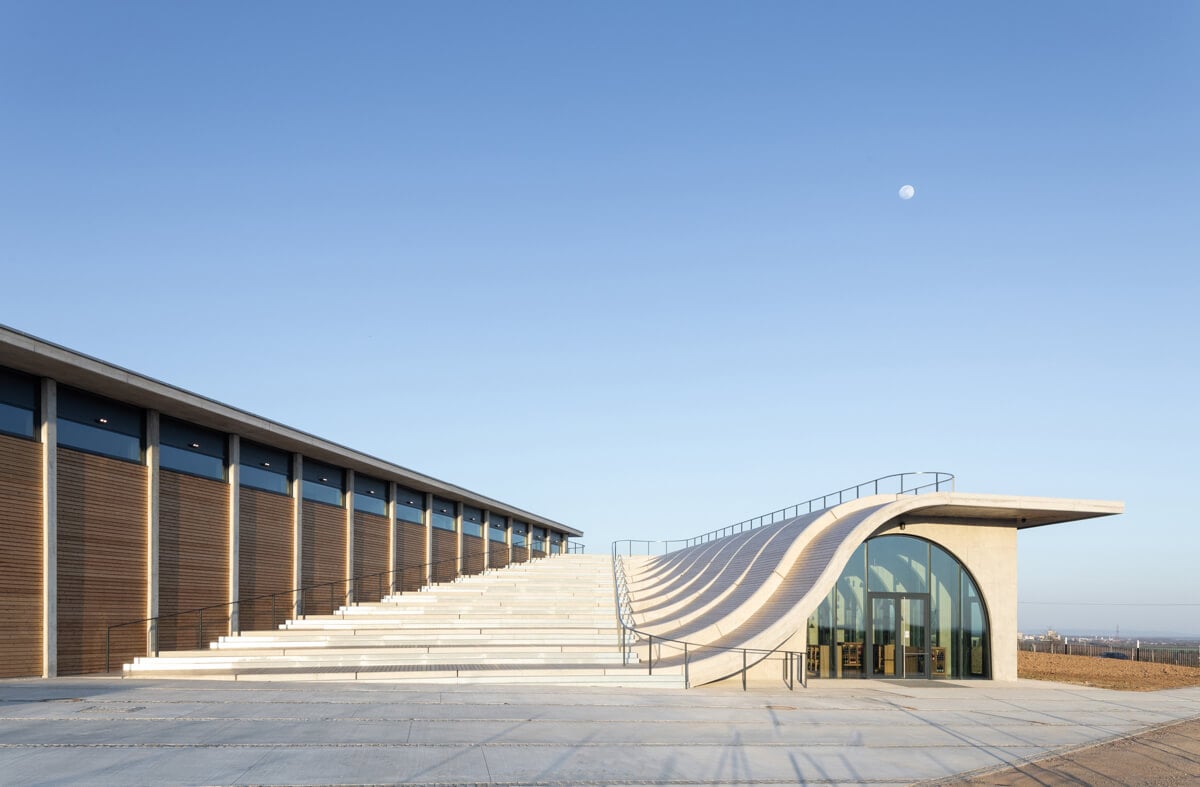 The two additional pine-clad masses, which vary in height, are conceived to accommodate the winery’s particular production processes. As opposed to meeting the main volume, they instead twist with the landscape to establish the tiered amphitheatre, which functions as a communal space for everything from traditional harvest celebrations to concerts to spontaneous happenings that animate the winery. 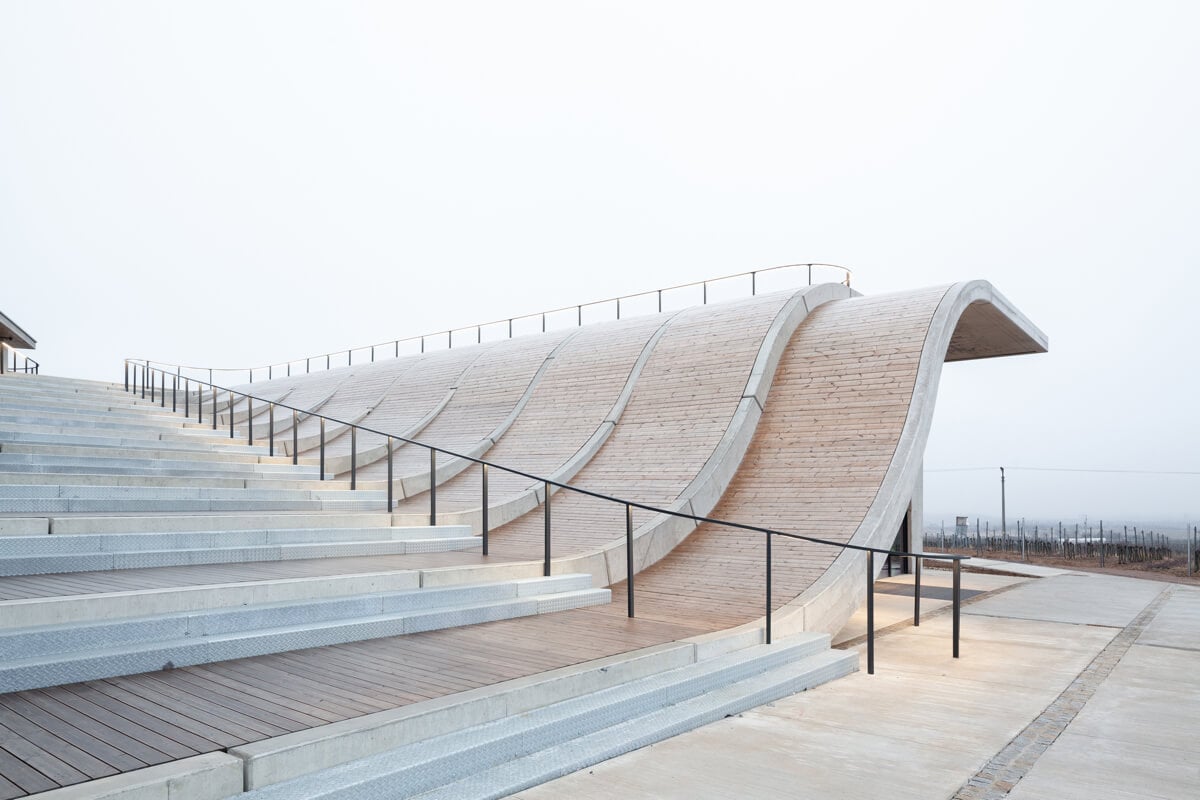 “It’s essential for the project because [the wine tradition in Moravia] is not only about production and tasting,” says Chybík, “but also about culture.” As such, the firm’s intention is for the complex to become as much a part of the cultural landscape as the region’s wine tradition. “We wanted to create something that’s permanent, for at least the next hundred years,” says Chybík. “We also wanted to show the world that, [even] in such a small place as Znojmo and country as the Czech Republic, something unique is happening.”